Adam Castillejo, aka the London Patient, continues to advocate for a widely applicable HIV cure.

Few people can truly understand Adam Castillejo’s journey to being cured of HIV. Timothy Ray Brown was one of them.

“The first time we spoke, he said, ‘Brother, welcome to the family,’” Castillejo recalls. “That was his warm, caring message to me, and it gave me such a sense of acceptance from him.”

Like Castillejo, Brown, initially known as the Berlin Patient, had lived with HIV for years before being diagnosed with blood cancer—Hodgkin lymphoma in Castillejo’s case; acute myeloid leukemia in Brown’s. Both underwent treatment with chemotherapy before undergoing a bone marrow transplant from a donor with a rare genetic mutation known as CCR5-delta32, which blocks HIV from entering T cells. The treatments—Castillejo’s in 2016, Brown’s nearly a decade earlier—cured both men of HIV by replacing their immune cells with resistant cells carrying the mutation.

At first known only as the London Patient, Castillejo, 41, revealed his identity in a March 2020 article in The New York Times. His medical team had initially advised him to remain anonymous and focus on recuperating. Within a year, as his health improved, Castillejo decided he had a responsibility to the scientific and HIV communities to come forward.

“I want to be an ambassador of hope,” Castillejo says. “I want to represent the future. We have to prepare everyone, mentally and physically, for the journey ahead.”

Castillejo and Brown, who connected after Castillejo revealed his identity, were not able to meet in person because of the COVID-19 pandemic, but they spoke weekly on the phone and via video chat, sometimes for hours.

In 2019, Brown discovered that his cancer had returned. In 2020, he announced that he was terminally ill.

“He told me before he was dying, ‘Adam, it’s your turn now,’” Castillejo says. “‘You’re holding the torch of hope. I’m passing it on to you.’”

Brown died in hospice care in September that year.

“I told him I would do the best I can to give hope to people,” Castillejo says. 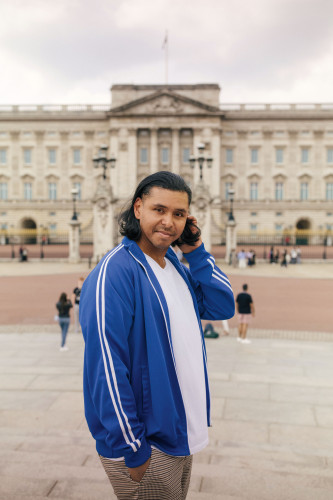 Castillejo, like his doctors, readily acknowledges that the treatment he received is not appropriate for most people living with HIV. He counts himself fortunate to be a British citizen because the U.K. government provides health care at no cost. He was able to undergo expensive treatments and work with some of the world’s leading HIV and cancer experts.

“I feel fortunate to have been at the right place at the right time and to have been looked after by the U.K. National Health Service,” he says. “I won the lottery. I never thought in my life that I would be cured of HIV.”

What’s more, the risks and side effects of undergoing cancer treatment and a bone marrow transplant make it an impractical course of action for the estimated 38 million people around the globe currently living with HIV. The procedure nearly killed Brown, and he suffered from its aftereffects for the rest of his life.

“It’s important to realize my cure is not accessible to everyone because it is highly risky and costly,” Castillejo says. “At the same time, it’s a blueprint.”

Castillejo’s case shows that curing HIV is possible and augurs a future in which HIV is neither a lifelong condition nor an enduring pandemic. Castillejo believes both society and those living with HIV must prepare for that moment.

“It’s important to prepare the next generation of people for the cure, prepare for the failures along the way, prepare for that crucial moment in your life,” he says. “When you get cured, people look at you in a different way.”

The effects of HIV do not end once you’re cured. The trauma of treatment and the experience of discrimination—close friends walked away after Castillejo shared his HIV status—leave lasting psychological scars. Despite being free of the virus, Castillejo said a part of him relives his desertion by friends whenever he recounts his story. He stresses the importance of mental health treatment.

“We need to normalize talking about mental health, which people see as taboo,” Castillejo says. “People think you are weaker when you talk about mental health, but, in reality, it makes you stronger. As I say to people, ‘It’s OK not to be OK one day and be OK the next day.’”

Some HIV/AIDS groups have said they cannot work with Castillejo because their advocacy efforts center on treatment and prevention—not an inaccessible cure.

“For some in the HIV community, I’m not relevant to the cause anymore,” Castillejo says. “People don’t know where to put you now because you’re cured—you’re not part of the group anymore.”

Castillejo sees it differently. “Despite being cured, I will always be a member of the HIV community,” he says. 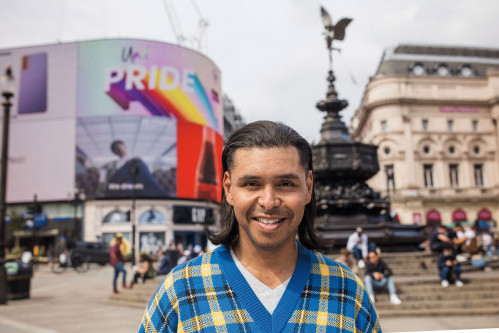 Of Dutch and Spanish descent, Castillejo was raised in Venezuela and moved to Copenhagen as a young man before settling in London in 2002. He discovered he was HIV positive in 2003 at age 23.

“I felt frightened. I felt my life was over. I felt like, as they say, it was a death sentence,” Castillejo recalls.

Castillejo was told he had 10 years to live—20 maximum. With the support of his partner at the time, he decided to make the best of it. He worked as a chef at a restaurant and took care of himself physically, cycling and running regularly. While close friends and loved ones knew of his status, Castillejo did not speak publicly about his HIV diagnosis at the time.

Castillejo was visiting friends in New York in 2011 when a nurse called him back to London, where he learned he had Stage IV lymphoma.

“I got another death sentence I had to endure,” Castillejo says. But he did not face the same stigma with cancer that he had with HIV.

Nevertheless, years of treatment with chemotherapy and radiation took their toll. Every change in his cancer treatment required an adjustment to his HIV medications. The cancer was very aggressive, and each successive treatment attempt drained him. Then, in late 2014, just weeks before Christmas, Castillejo disappeared. He reemerged days later with no recollection of what had happened.

“Everything around me was falling apart,” Castillejo says. “It was too much for me to bear both physically and mentally at the time.” Castillejo considered contacting the Swiss nonprofit Dignitas, which helps those with terminal illness end their lives, but, ultimately, he continued with treatment.

“You have to see yourself at rock bottom and see yourself there in order to get back,” Castillejo says. “Not everyone can do that.” Things looked grim in mid-2015 when Castillejo was told he would not live to see the end of the year. But then, he connected with Ian Gabriel, MBBS, PhD, an expert in bone marrow transplants who had worked with people living with HIV at Chelsea and Westminster Hospital. After failing to harvest Castillejo’s own stem cells for a transplant, Gabriel suggested searching for a bone marrow donor.

Castillejo matched with several, including one in Germany who carried the CCR5-delta32 mutation. Suddenly, Castillejo was presented with an opportunity to be cured of both cancer and HIV. But his medical team urged caution, explaining that he had only a 10% to 40% chance of survival.

“We had controlled expectations,” he says. “The main focus was to cure my cancer.”

Castillejo received a bone marrow transplant on May 13, 2016. What followed was an extended period of recovery during which Castillejo contracted several infections, underwent more surgeries and experienced hearing loss. He lost 70 pounds. Doctors waited 100 days to ensure that his transplant had taken and continued to monitor the levels of HIV and cancer in his blood.

After another six months, they suggested Castillejo stop taking the antiretroviral medication that had kept his HIV in check for more than a decade. Castillejo took his last dose of antiretroviral pills on his birthday in October 2017. Then came more waiting.

“It was not one thing that happened at a single time; it happened over a period of time,” Castillejo explains.

Doctors tested Castillejo for HIV after a week, then again at six months. After a year, the medical team felt confident that Castillejo, like Timothy Ray Brown, had been cured of HIV.

But they waited until March 2019—17 months after Castillejo stopped taking antiretrovirals—to announce their findings in the journal Nature and at the Conference on Retroviruses and Opportunistic Infections in Seattle.

Before coming out as the London Patient in March 2020, Castillejo traveled around the world, visiting Australia, South Africa and Peru.

“I wanted to experience things in my life and explore many cultures before my name was made public,” Castillejo says. “After that, my life changed.”

As a public persona and a proud member of the LGBTQ community, Castillejo fields questions via social media, gives interviews to journalists and participates in documentaries. He lives with his mother.

“When I felt really lost, really hopeless, she was there for me—she’s my rock,” Castillejo says. “She reminded to me to stay focused in life, to see the positive things.”

With the COVID-19 pandemic seemingly coming to an end in many countries—and with effective vaccination against the coronavirus—he says he hopes to be out in public more.

I want to be an ambassador of home. I want to represent the future.

Castillejo says he is driven to speak about his experiences after hearing from so many people who lost family and friends to AIDS in the 1980s and ’90s. “Please find a cure,” the dying told loved ones. “For them, it’s just heartwarming to be able to talk to someone who was cured,” Castillejo says.

He says he regrets not having been able to meet Brown in person but has met the Düsseldorf Patient, a man in Germany who shows no signs of HIV after undergoing a stem cell transplant from a donor with the CCR5-delta32 mutation in 2013.

“We are building a great relationship,” Castillejo says. “We are similar in many ways, like brothers.”

At the 2022 Conference on Retroviruses and Opportunistic Infections in February, researchers announced that a fourth person—this time, a middle-aged woman of mixed race who was treated in New York City—had been cured of HIV.

After contracting the virus in 2013, she was diagnosed with acute myeloid leukemia in 2017. She underwent chemotherapy before receiving a transplant using a combination of umbilical cord stem cells from an infant with the CCR5-delta32 mutation and partially matched adult stem cells from a relative.

As in the other cases, her cancer went into remission and she appears to be free of HIV about a year and a half after stopping antiretrovirals. The outcome is considered especially promising given that a mixed-race person would have a slim chance of finding an adult donor who is both a close genetic match and carries the mutation, which occurs most often in people of Northern European ancestry.

“I welcome the New York Patient,” Castillejo says. “I hope in the future to meet her and say, ‘Welcome, sister, to the family.’”

Castillejo says he plans to continue to spread his message of hope for those living with HIV and to encourage others to live life to the fullest.

“Life is so precious,” Castillejo says. “When they told me I was going to die, I realized the importance of enjoying life the best way you can.” 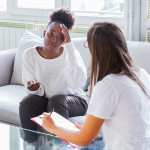 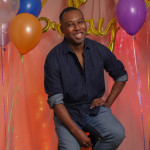