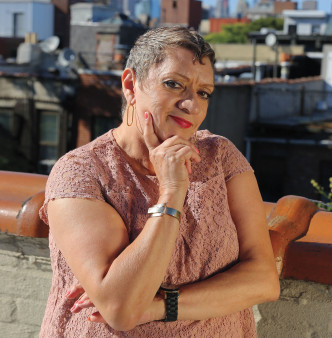 Lillibeth Gonzalez proudly celebrated her 26th “HIVersary” on June 2, marking yet another milestone for the woman who has overcome addiction, domestic violence, stigma and the AIDS-related deaths of three siblings.

“I went through hell and back to get to where I’m at today,” says Gonzalez, who is a native New Yorker. “But I’m so happy because I’m living and aging with HIV.”

In 1992, Gonzalez tested HIV positive. Inspired to persevere by her young son, she became mentally strong while physically suffering. With the epidemic raging on, Gonzalez refused to sit idly by, so she underwent training on HIV from several health and wellness organizations, including Gay Men’s Health Crisis (GMHC) and Exponents.

“I informed myself so I could help others make informed choices,” Gonzalez says.

For 25 years, Gonzalez has been a client at GMHC, the world’s first HIV organization. She has also worked there as a community health educator since 2006.

“GMHC was the first place I went to,” she says. “I want to do for others what GMHC did for me.”

One of her goals is to reach out to the Latino community, which she believes harbors a lot of HIV-related stigma.

For the past 10 years, Gonzalez has regularly distributed condoms and information on safer-sex practices to patrons of a local beauty salon.

In April, Gonzalez held a one-day event for people age 50 and older living with HIV, another population she is passionate about helping.

And in September, you can find her in Orlando giving a presentation on aging and HIV at the 2018 United States Conference on AIDS (USCA).

“My goal,” says Gonzalez, “is to end the epidemic by 2020, like Governor Andrew Cuomo said.”