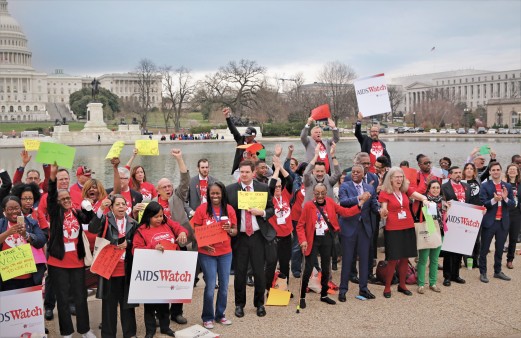 Jesse Milan and other advocates rally before lobbying Congress during AIDSWatch 2017. Courtesy of AIDS United

Jesse Milan Jr. is president and CEO of AIDS United, which seeks to end the AIDS epidemic in the United States. Based in Washington, DC, the nonprofit group fulfills its mission through strategic grantmaking, capacity building, policy and advocacy, technical assistance and formative research. The AIDS United Public Policy Committee, which currently consists of 44 leading HIV organizations from across the country, guides the policy work of AIDS United.

AIDSWatch—an annual event that gathers together advocates, many of whom are HIV positive themselves, to lobby Congress on behalf of people living with HIV—is an AIDS United policy and advocacy initiative. More than 650 people from 34 states, DC and Puerto Rico came together in March, the most ever to attend. Every office in Congress was contacted, and in-person meetings were held with over 260 offices. As a person living with HIV for more than three decades and an AIDS advocate for just as long, Milan was in attendance for personal and professional reasons.

A lawyer by training, Milan serves on the Scientific Advisory Board for the President’s Emergency Plan for AIDS Relief (PEPFAR) and has cochaired the Centers for Disease Control and Prevention (CDC)/Health Resources and Services Administration (HRSA) Advisory Committee on HIV and STD Prevention and Treatment. He has also been a subject matter expert on projects for the CDC, HRSA and other federal agencies. He is chair emeritus for the Black AIDS Institute.

AIDS United is guided in its policy work by our public policy committee, which includes groups like GMHC, Whitman-Walker Health, AIDS Alabama, Nashville CARES, AIDS Foundation of Chicago and APLA Health. Our policy staff supports the committee in developing its agenda and priorities. The staff works very hard to carry out those priorities, particularly in the federal arena, but also supporting our partners at the state and local levels.

Currently, we’re focused on the continuation of the Ryan White program and addressing appropriations to make sure that we have the best possible funding levels from Congress for HIV prevention, treatment and care, as well as research.

We are also focused on preserving as many favorable aspects of the Affordable Care Act (ACA) as possible if conservative Republicans in Congress continue to try to repeal and replace it. Keeping provisions protecting people with preexisting conditions, no cost sharing for preventive services and the expansion of Medicaid are particularly important.

We are concerned about Medicaid because we know that people living with HIV are substantially in the low-income range. We want the state Medicaid expansions that have happened to remain, and we hope states that did not expand their Medicaid programs will do so.

We continue to be concerned about proposals like health savings accounts, ending or reducing essential health benefits or adding provisions that would allow insurers to charge much higher premiums that could emerge in legislation considered by Congress. Implementation of these ideas could put insurance costs beyond the reach of low-income people. Under these proposals, many may not have the ability to pay for the premiums and the copays necessary to obtain health care coverage or the drugs that they need.

We also have to focus on ensuring that both the 2017 and 2018 budgets and appropriations bills do not cut vital health care and treatment services for people living with HIV, access to housing, HIV prevention efforts and programs for mental health and substance use treatment. The president continues to say that he wants to cut funding for these types of services, but they are absolutely critical to our national response to HIV.

This year’s event was the largest we’ve had. We were excited to bring together all the many voices and stakeholders for HIV/AIDS to coalesce around the policy agenda that I just described and to deploy themselves to meet face-to-face with legislators in both the House and the Senate.

This year, we hoped to harness the anger and the anxiety that so many HIV stakeholders are feeling and direct that energy into a productive advocacy process that allowed us to tell our stories. We also wanted to articulate that the funding by the U.S. government has had a real impact not only on the lives of people with HIV but also on the whole economy.

Living under a former CEO as president, it’s important in this new environment that all of us become savvier about the return on investment that public and private funders are making in HIV and be conversant with how we describe that investment.

Describe your efforts in the South.

The program targets a part of the country where resources are needed the most and where the epidemic needs to change. The program goals for this year will be to further infuse racial and social justice concepts into the work of the grantees. Intersectionality can take all of our efforts to the next level, but particularly in the South, where racial and social justice issues are still in need of aggressive approaches.

The South is a battlefield not only for Medicaid expansion, since many of those states haven’t expanded it, but also for HIV criminalization laws. Those battles will be won mostly in state legislatures and not at the federal level. We will help build the power needed for these issues.

In addition to Southern REACH, AIDS United manages a significant program called the Positive Organizing Project (POP), which is focused on bringing meaningful engagements of people living with HIV/AIDS into not only organizational leadership but also state, local and national leadership. POP grantees are addressing state criminalization laws, educating local and state officials about the need for greater funding and disrupting HIV-related stigma through a variety of programs led by HIV-positive people.

You’ve been fighting HIV for decades. No one would blame you for hanging up your hat. Why are you still fighting?

Yes, in fact, I’ve definitely decided not to hang up my hat! I threw my hat into the ring to be interim president and CEO and then threw my hat in again to be chosen for this role permanently.

I come from a family that never stops. To this day, my father is still a civil rights leader in Kansas, and my mother was a busy volunteer literally until the day she died. I live by a code that goes like this: “To whom much is given, much shall be required.”

I have been blessed with so much from my family, friends and supporters, from mentors and employers, so I can’t stop. I’m glad I haven’t stopped because I feel like the new political environment demands more from all of us, and because of that, it demands more from me.

How can folks get more involved?

If you can put in time, then volunteer. If you can put in money, then donate. The important thing is to find what calls to you personally. When you are committed to a mission, your desire to give and do more will be boundless.

Living with HIV is a daily challenge, but we meet that challenge when we’re supported by others and when we support others. I’m lucky to have a network of people also living with HIV for support. I hope all POZ readers can find that network and support for themselves.