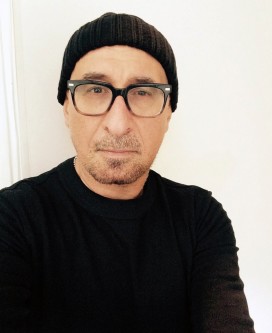 The film’s director and cowriter, Vincent Gagliostro, mined his own life for the script. In 1987, he became a founding member of activist group ACT UP (AIDS Coalition to Unleash Power), whose Communications and Graphics Outreach group he cochaired. POZ spoke with the self-described “agitator and instigator” about survivor’s guilt, younger generations and the future of activism.

First off, since this is relevant to the story, I have to ask your age.

And your HIV status, if you discuss that publicly.

Negative. It never—no one ever asks.

I’ve talked to other HIV-negative people from the early days of the epidemic who consider themselves long-term survivors. Do you?

No. I don’t have any issue with someone using that term, but for me, surviving kind of puts things in the past and the issues surrounding HIV and AIDS are as large as they were in 1987. Treatments are different, but in terms of discrimination and drug access and the government bullshit—I’m still working at the same things.

In your movie [see the trailer, above the headline], Sam, Alan Cumming’s character, is an aging ACT UP activist and artist who was friends with the writer/editor William Wilson (played by David Drake), who died of an AIDS-related illness in 1999. That also describes you. So how much of the story is based on your real life?

Sam is pretty much autobiographical—much of the film is. Well, I don’t smoke [Laughs].

That’s the difference! Interesting. Because honestly, I found Sam to be a difficult character to tolerate, with his bringing up AIDS horror stories at awkward times and belittling his friends’ gay marriage. Can you talk about the intention behind that?

To put it a different way, he’s off-kilter, he’s disruptive. [His friends] just never know when Sam is going to freak out about something. He’s longing for a community that no longer exists and doesn’t really relate to much that’s going on today. It’s from my own analysis of myself but much more exaggerated in Sam. I’m not that disconnected, I hope. Some of the descriptions of Sam [that I’ve come across have assumed] it’s about survivor’s guilt. But it’s not that, not the way I conceive the character.

Then what is the root of his problems?

I think that with Sam, what he actually knows and resents—that’s a good word, resent—is that loss is really the determining event in his life. Alan and I talked about that, and that’s where Alan was with it too. Why do we have difficulty coming to terms with loss? It’s usually because—based on my psychology of it—somehow we left something undone. And Sam feels that, as far as he’s concerned, people are still dying and he’s not doing anything. I think there’s guilt but not survivor’s guilt. He beats himself up a lot. It really [has to do with] feeling like you missed saying goodbye.

What I discovered in the filming was that my motivation for the film could be summed up in the scene when [Sam] is writing the names [of friends lost to AIDS] on the wall. So what happened was, Alan just kept writing, and I was yelling out names and spelling them, and the [room] was like 500 degrees, and red chalk [was] flying all over the place, and he’s a wreck, and I’m a wreck, and when he finished, he sat down in the corner, and I kinda dropped the paper and burst into tears for about 20 minutes. I realized that what had just happened was I gave a eulogy for these people who I never really felt like [I had eulogized] because their deaths for the most part were always loaded with or used for political actions and evidence. So it just dawned on me: Oh, my God, I now can be OK about saying proper goodbyes to people.

Wow. That must have been cathartic.

Very much so. And [in a separate scene involving taking ACT UP] ephemera off the wall, when my editor and I laid the Perfume Genius track over it and watched it through—I’m gonna cry now [chokes up], she looks at me and says, “Now you’re done with this.” And I’m like, “Yeah, yeah.”

A bit of a pivot here, but another theme of the movie is relationships between different generations of gay men. Are you still in touch with a lot of older AIDS activists?

Yes and no—kinda. A lot of the ones I’m around are like Avram Finklestein [one of the men behind the iconic “Silence = Death” poster] and Charlie Welsh, who worked on the film, and Peter Staley. You know, the people who were very active and were doing stuff together with TAG [Treatment Action Group, a spinoff of ACT UP]. They’re out there motivating these kids. Avram’s doing incredible work.

You made a short film, After Silence, about Avram’s recent activist venture, Flash Collective. You guys seem to have found a way to remain engaged. What advice would you give to someone like Sam?

One has to force oneself to be engaged, no matter how politically active you are. Just look around and find something you have issue with. And I’m not saying everyone has to be a poster-waving, screaming-in-the-street activist. I’ve been doing this since I was 13 years old protesting the Vietnam War. I had an aunt who would have these conversations with me when I was a kid. That’s where I got it from. But I don’t think there’s a magic pill or idea to get people motivated.

Your film After Louie grew out of an art installation project you did, which in turn was based on a short memoir titled After Louie by your friend William Wilson. In the process of turning the project into a movie, you cowrote the script with Anthony Johnston, whom you described as being half your age and who plays a role in the film. Aside from that, what are your interactions with—and opinions about—younger generations?

I’m very much in touch with kids, and I’m not as black-and-white as Sam. For me, they have an enormous amount of political power. They didn’t know it until what we just witnessed on Saturday [at the March for Our Lives rallies]. That’s what makes me angry: People just don’t use [their power]; they’re lazy. That’s how Trump got elected.

I saw some of the youth leaders saying their next step is to register people to vote.

I’m telling you, they are going to save us. They’re not fucking around now.

If you had the proverbial ear of the younger generation, what would you want to tell them?

I want to tell them a few things. One is that they really need to love each other and that they need to talk, really talk. Nobody talks now! I was at a bar with some friends, and this guy is like, “I just poked that guy.” And I’m like, “What?” He said, “You know, poked. On Facebook.” I’m like, “The guy is five feet away from you, and you poked him electronically?” But it’s amazing how everything is communicated through text messages and no one will answer the phone. And these kids they’re just setting themselves up for a big fall. And parents have convinced these kids that they’re great and wonderful and then I see that they’re 30 years old and freaking out because, “Oh, why aren’t I making $100,000, or why aren’t I famous, my mother told me….” So I try to do my part. If I’m working with younger people, now I tell them, “Texting is fine if you’re going to tell me you’re going to be late or have a quick question. But if you don’t hear back, it means you’d better call!” It’s my little part in getting people to talk more.

I read that the iPhone has destroyed the sexiness of New York on the city streets. We used to look at each other while walking! And Anthony [Johnston] is a great foil for all this. I’ll never forget we were working on a scene, and he says, “Jesus, this is so fucking meta,” and I sat there and said, “I have to go pee”—and then I had to go look it up.

You’re learning things from young people. It goes both ways.

Totally. And that’s what Sam and Braeden find out about each other. Neither is who they expected their generation to be.

After Louie is playing at Cinema Village, 22 E 12th St, in Manhattan and is available on iTunes plus everywhere on demand beginning March 30. For more information, visit AfterLouie.com and Gagliostro.com.