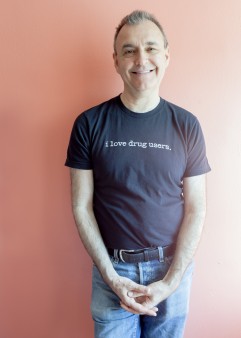 “I came to New York because of the Velvet Underground,” Allan Clear recalls. It was 1982, and the British-born harm reduction advocate took bartending and waitstaff jobs in the city’s Lower East Side to get by. He was surrounded by gay men and drug users.

“Doing that work, you were kind of at the epicenter of the epidemic,” Clear says. “Being surrounded by positive people or people living with and dying of AIDS was a constant source of anger, pain and fear. I remain angry at the fact that there are people who can’t access a medical system or social services because of who they are and what they do.”

The HIV-negative ally joined ACT UP in the ’90s, helping to start an illegal underground needle exchange to prevent new HIV cases. Then, in 1992, when the New York State government recognized the need to set up legal syringe exchanges, Clear, now an experienced advocate, was placed at the head of the Lower East Side Harm Reduction Center.

“That was my first full-time job, really,” Clear recalls, and soon after he was asked to take a job as executive director of the New York City–based Harm Reduction Coalition (HRC), advocating for drug users, marginalized populations, and people living with HIV and hepatitis C virus (HCV) across the country. It was a post he held for 20 years.

“What we were doing was public health through a sort of social justice lens,” Clear explains. “And it’s providing those services in a nonjudgmental and compassionate way.”

In January, Clear, 56, said that he was leaving HRC to become the New York State Health Department’s director of drug user health, the first position of its kind in the United States. The job, which he started in February, aims to expand syringe access programs, overdose prevention work, HCV research and health care for drug users across New York.

“I’m going over to the dark side and working for the government,” jokes Clear, adding, “I can help bridge some of that gap between the nonprofit world. Plus, the initiatives I am supposed to be addressing are things that I have been active in putting together from the community-based side since they started.”

“At the end of the day,” says Clear, who spends his free time taking care of his 3-year-old daughter, “I’m talking about people being treated like human beings in a way that they haven’t experienced for a long time.”