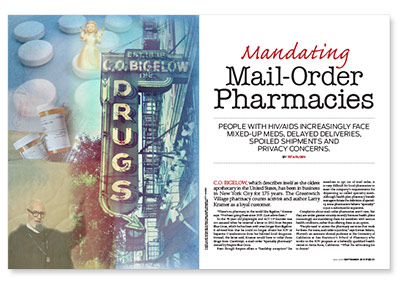 C.O. Bigelow, which describes itself as the oldest apothecary in the United States, has been in business in New York City for 175 years. The Greenwich Village pharmacy counts activist and author Larry Kramer as a loyal customer.

“There’s no pharmacy in the world like Bigelow,” Kramer says. “I’ve been going there since 1970. I just adore them.”

So the 78-year-old playwright and ACT UP founder was not amused when he received a letter in 2012 from Empire Blue Cross, which he has been with even longer than Bigelow. It advised him that he could no longer obtain his HIV or hepatitis C medications from his beloved local drugstore. Instead, the letter said, Kramer would have to order those drugs from CuraScript, a mail-order “specialty pharmacy” owned by Empire Blue Cross.

Even though Empire offers a “hardship exception” for members to opt out of mail order, it is very difficult for local pharmacies to meet the company’s requirements for dispensing so-called specialty meds. Although health plan pharmacy benefit managers dictate the definition of specialty, some pharmacists believe “specialty” is just a substitute for expensive.

Complaints about mail-order pharmacies aren’t new, but they are under greater scrutiny recently because health plans increasingly are mandating them for members with serious health conditions, rather than offering them as an option.

“People need to access the pharmacy services that work for them. For some, mail order is just fine,” says Kirsten Balano, PharmD, an assistant clinical professor at the University of California at San Francisco’s School of Pharmacy who works in the HIV program at a federally qualified health center in Santa Rosa, California. “What I’m advocating for is choice.”

Caleb Schwartz’s choice would be to stick with his local pharmacy. Dealing with CuraScript “is much more of a hassle,” says the Empire member, a 58-year-old New York City resident. “If you’re part of a patient assistance program, where the manufacturer pays your co-pay, that has to be handled by [CuraScript’s] billing department. That’s all done separately and post-shipping. They’ve screwed up a couple times.”

Schwartz, who worked as a lawyer before he went on disability, had been getting his HIV meds from the same brick-and-mortar pharmacy for more than a decade. “There’s a significant difference when you’re the person bringing the prescription into the pharmacy and picking it up,” he says. “You build that trusting relationship with the pharmacist. They’re gauging how [healthy] you’re looking, and they’re reacting to it.”

Research suggests that people whose health plans require them to transfer prescriptions from retail to mail order are less likely to take meds as prescribed. Problems with mail-order pharmacies range from mixed-up medications to delayed deliveries to spoiled shipments left on doorsteps in the sun.

While medications for other chronic conditions, such as high cholesterol or high blood pressure, still work if not taken exactly as prescribed, even a few missed doses of HIV meds can lead to resistance, notes Michelle Sherman, a registered pharmacist in Dana Point, California, who, like Balano, is accredited by the American Academy of HIV Medicine as a certified HIV pharmacist. “The pharmacist is a critical health provider for HIV patients,” Sherman says. “Everything revolves around the drugs. And adherence is pivotal.”

People with HIV/AIDS are often taking a complex combination of not only HIV meds but also drugs for other chronic conditions. Doses and medications can change frequently, and people with HIV/AIDS have come to depend on community pharmacists to guard against adverse drug effects.

Plus, while many people worry about the possibility of their mail-order drugs being left with a neighbor, privacy concerns are particularly acute for people with HIV/AIDS because of stigma and discrimination. “What if they leave it outside your door if you’re not home? What if they leave it with the doorman?” says Jules Levin, executive director of the National AIDS Treatment Advocacy Project in New York.

Balano tells of a privacy breach involving a patient whose health insurance plan forced him to switch to mail order. Instead of the Norvir tablets he’d been taking, the mail-order pharmacy sent him Norvir capsules, which are supposed to be refrigerated, as directed on the outside of the shipping package. He wasn’t home when the package arrived, so his roommate, who didn’t know the man had HIV, opened it and put the medication in their refrigerator. It would have been simple for the roommate to Google “Norvir” and learn that it’s a protease inhibitor used to treat HIV, Balano says.

“My patient’s very anxious that his status has been disclosed,” she says. If the man’s regular pharmacy had received the prescription, Balano adds, the pharmacist probably would have contacted his doctor to see whether he really needed to switch to Norvir capsules or continue to take Norvir tablets, which don’t need refrigeration.

Anthem Blue Cross wrote members in late 2012 saying they would have to get medications for HIV and cancer—but not drugs for other chronic diseases, such as diabetes—from CuraScript or pay full price at a retail pharmacy.

When Consumer Watchdog began hearing complaints about Anthem’s plan to require members to get specialty meds from CuraScript, virtually all of them were from people with HIV/AIDS, says Jerry Flanagan, an attorney for the organization.

People with HIV/AIDS have definitely been affected. When Kramer wrote an opinion for POZ.com about CuraScript, it generated lots of feedback. The scores of detailed and angry responses to Kramer’s op-ed and to a blog post by POZ editor-in-chief Oriol Gutierrez on his mail-order troubles confirmed that many people living with HIV/AIDS had similar struggles.

While the lawsuit and settlement relate only to Anthem members living with HIV/AIDS in California, Flanagan says, “I can certainly see potentially other lawsuits on behalf of other seriously ill consumers.”

Plaintiff “John Doe” is a 60-year-old hairdresser who lives in San Diego. “I deal with a community pharmacy here in San Diego,” says Doe, who asked that his real name not be used. “I always like to do that, especially if they’re a gay-related business.” He had quadruple bypass surgery in 2010 and is on a variety of medications. Doe says he’s particularly loyal to a pharmacy manager who has helped him get discounts and stay on top of his prescriptions for 18 years. “She’s been my pharmacy angel. She’s always looked out for my best interests.”

After he received the letter from Anthem telling him he would have to get his four HIV meds from CuraScript, “I’d wake up in the middle of the night and panic. It frightened me.”

Doe says he asked his pharmacy angel what he could do, and she referred him to a Washington, DC, attorney who represents community pharmacists. The attorney recommended that Doe contact Flanagan at Consumer Watchdog.

That lawsuit was settled in May. Doe received $10,000, and Anthem agreed to allow members with HIV/AIDS to easily opt out of the mail-order program. A telephone number has been set up just for that purpose, and calls have to be answered within 45 seconds, according to terms of the settlement. “They cannot send you into voicemail hell,” Consumer Watchdog founder Harvey Rosenfield said. “This population doesn’t have the time or energy to navigate those kinds of methods.”

But what about Californians who have a different health insurance provider? If other insurance companies try to do what Anthem did, Rosenfield says, “they’ll be getting a knock on the door from us.”

The suit alleges that United Healthcare is discriminating against HIV/AIDS patients by requiring them either to transfer their prescriptions to its in-house mail-order pharmacy OptumRx or pay the full cost of their meds at local pharmacies. United Healthcare members in other states also face this choice.

While Anthem members who opt out can get HIV drugs from their pharmacy of choice, that is not the case for Empire Blue Cross members, even though both companies are subsidiaries of the insurance giant WellPoint.

After receiving complaints from Empire customers forced to use mail-order services, the office of New York Attorney General Eric T. Schneiderman negotiated with the insurance provider to implement exemption rules. In June, Schneiderman issued a statement praising Empire’s “Specialty Prescription Drug Fulfillment Hardship Exception Criteria,” which applies not only to HIV and hepatitis C drugs, but also to medications for cancer, rheumatoid arthritis, multiple sclerosis and other serious conditions.

The statement announced that his office had sent a letter to 15 New York–based health insurance plans, including Aetna, Cigna and Oxford Health Plans of New York, to urge them to adopt similar opt-out programs.

But in the case of Empire, Schneiderman may have been too quick to offer praise. In a statement to POZ, WellPoint spokeswoman Lori McLaughlin explained the hardship exception: If they prefer not to use the mail-order CuraScript service, “members can also use their local retail pharmacy to obtain their specialty drugs if the retail pharmacy agrees to the same reimbursement and contract terms as Empire’s network specialty pharmacy.”

Therein lies the problem. Hypothetically, Larry Kramer, for example, can continue to get his meds at Bigelow if the drugstore meets WellPoint’s requirements for a specialty pharmacy. Those requirements include 24/7 phone access to a nurse or pharmacist, fulltime assistance for the speech and hearing impaired, accreditation by two organizations that mainly accredit hospitals—“the list goes on and on,” Bigelow owner Ian Ginsberg wrote Kramer in an email.

Ginsberg calls the requirements “ludicrous.” Even Schneiderman’s statement points out that “such requirements are not within the normal business operations of retail pharmacies.”

As of early July, two retail pharmacies had made a formal request to Express Scripts, WellPoint’s pharmacy benefits manager, to become a specialty pharmacy, but they “did not meet the contract terms and conditions,” Empire spokesworman Sally Kweskin told POZ. “It is our intention to provide as much assistance as possible through the process to make it as simple and straightforward as possible.”

In an email to Leslie Maxwell, a nurse who works for WellPoint Pharmacy Services, Kramer called the description of the hardship exception “gobbledygook.” “You are perpetuating a major scam on helpless patients,” Kramer continued, “and you won’t be getting away with it for long.”