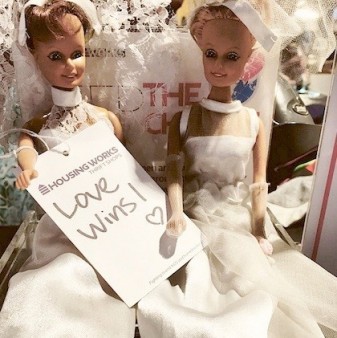 Marriage Equality Gets Cheers, Tweets and Pics From AIDS Leaders

In a 5–4 decision, the Supreme Court ruled that the Constitution guarantees same-sex marriage equality, reports The New York Times.

The decision is a major win for LGBT civil rights. Advocates and leaders from the HIV/AIDS communities are noting the importance of the ruling, and they’re doing so via traditional press statements as well as through social media.

“Thirty years into the AIDS epidemic, we know that discrimination and prejudice—regardless of who is the target of these terrible actions—harm our families, friends and neighbors in societal, interpersonal and economic ways,” said Michael Gifford, president and CEO of AIDS Resource Center of Wisconsin (ARCW) in a statement. “Discrimination also harms their health. Nowhere is this more clearly demonstrated than in the HIV epidemic among gay men.

“Of the 8,000 men and women living with HIV disease in Wisconsin,” Gifford continues, “more than half are gay men. For too long, LGBTQ people have been discriminated against and marginalized, making it harder for them to access the education, health care and social services they need to live a long and healthy life including remaining HIV free.”

The Black AIDS Institute saluted the court’s decision, calling marriage equality “one of the greatest civil rights issue of our time.” In a released statement, the organization also noted that the marriage ruling takes place on the same day as the funeral of the Rev. Clementa Pinckney, the state senator and slain leader of Emanuel A.M.E. Church in Charleston, South Carolina. “This Supreme Court decision reminds us that change can happen,” said Phill Wilson, president and CEO of the Black AIDS Institute. “We the people of the United States must continue our struggle so that Americans of all backgrounds can participate fully in our society. Human beings do not live in compartments—either we are free, whole and fully American, or we’re not.”

Dan Bruner, the senior director of policy at Whitman-Walker Health, which serves the LGBT and HIV communities in Washington, DC, released this statement:

“This is a great moment for LGBT people and for our nation, the Court’s sweeping endorsement of the dignity of same-sex couples and families sends a powerful message that will help counteract the stigma and discrimination that still cripple the lives and hearts of so many in our community, and that undercut our health in so many ways. And, as the Court recognized, full legal recognition opens the door to health insurance and financial and legal security for same-sex families.” 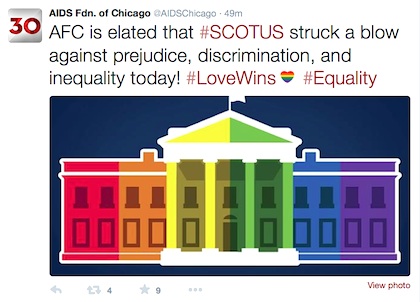