In other AIDS Memorial news: Applications are being accepted for the Mary Bowman arts award and the Pedro Zamora youth scholarship.

It was expected to be the largest display ever of the AIDS Memorial Quilt in San Francisco, but the event, originally planned for April 3 to 5, has been postponed as a result of efforts to stop the spread of the novel coronavirus.

“We are following the lead of the City and County of San Francisco, which announced the postponement of the 150th Anniversary Celebration of Golden Gate Park, previously planned for April 4,” said John Cunningham, executive director of the National AIDS Memorial, the stewards of the AIDS Quilt, in a statement.

More than 500 volunteers were expected to participate in the display. “We had an incredible response from volunteers, and many people had begun to make new panels for the Quilt to be added at the display,” said Quilt cofounder Mike Smith in the National AIDS Memorial press release. “With this renewed community support and with the Quilt now relocated here in the Bay Area, we look forward to announcing a new date as soon as the situation warrants.”

The National AIDS Memorial oversees the AIDS Memorial Grove in Golden Gate Park and several other HIV-related programs. In November 2019, the Memorial announced it would serve as the new steward of the Quilt. For more details, see “AIDS Memorial Quilt—All 50,000 Panels—Is Moving to a New Home.”

The $5,000 Bowman award will go to an HIV/AIDS artist-activist 27 years old or younger. Several Pedro Zamora scholarships are awarded to young people—ranging from current high school seniors to college students 27 and younger—working to fight the HIV epidemic. In 2019, the Memorial awarded a total of $50,000 to 10 students.

To learn more about Bowman, who was born with HIV in 1988, see “R.I.P. Mary Bowman, Poet, Songwriter and Performer Who Tackled HIV.” 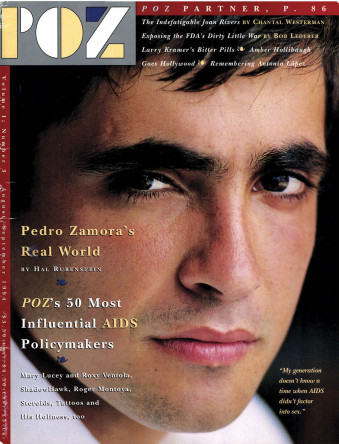 Pedro Zamora on the cover of POZ 1994

For recent POZ articles about Zamora, an MTV reality TV star who died in 1994 shortly after appearing on the cover of POZ, see “Real Spirit: 25 Years Without Pedro Zamora” and the related remembrance of Zamora’s boyfriend, “Real Impact: Remembering Sean Sasser.”

In related news, POZ interviewed Cunningham for our 25th anniversary last spring; see “Healing Through Remembrance: The National AIDS Memorial Is Much More Than a Grove.”