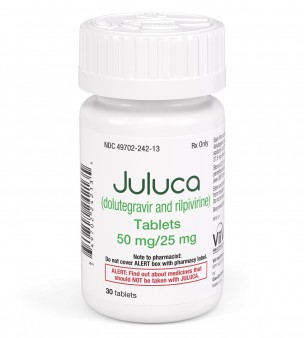 Juluca is a single-tablet regimen for HIV.

For the first time, the Food and Drug Administration (FDA) has approved an HIV treatment regimen that contains only two antiretrovirals (ARVs), instead of the standard three or more drugs. Juluca (dolutegravir/rilpivirine) is approved as a new option for people with HIV who have been virally suppressed on their current ARV regimen for at least six months, have never failed treatment and do not have viral mutations associated with resistance to either of the drugs in the fixed-dose, single-tablet regimen.

Juluca is an option for those looking to avoid nucleoside/nucleotide reverse transcriptase inhibitors (NRTIs). The regimen includes ViiV’s dolutegravir, sold individually as Tivicay, which is an integrase inhibitor, and Janssen’s rilpivirine, also known as Edurant, which is a non-nucleoside reverse transcriptase inhibitor (NNRTI). Tivicay in particular is prized because people taking the drug develop resistance to it at a very low rate.

“[Juluca] will be the smallest once-daily single pill including all the treatment a subject needs to control his HIV,” says Josep M. Llibre, MD, PhD, an infectious disease physician at the University Hospital Germans Trias i Pujol in Barcelona who led the two identical clinical trials on which the FDA approval was based.

These trials included 1,024 people with HIV who were randomly assigned to stay on their current successful ARV regimen or switch to the components of Juluca. Those who took the two-drug regimen had the same rate of viral suppression after 48 weeks (95 percent) as those who stayed on their initial regimen.

The most common adverse health events among those taking Juluca were diarrhea and headache.

Fewer drugs in an HIV treatment regimen should spell less toxicity, at least in theory. Future research will hopefully indicate whether the two-drug regimen does indeed confer a long-term safety advantage over regimens including three or more ARVs, in particular with regard to bone and kidney health.

People Who Have Taken Many HIV Meds Have Worse Health Outcomes