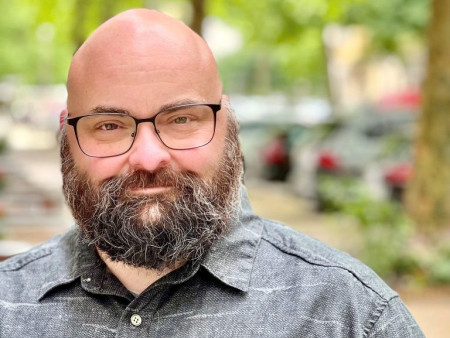 Masen Davis is the executive director of FCAA. He brings experience fighting for transgender and other marginalized populations.

Masen Davis is the new executive director of Funders Concerned About AIDS (FCAA), which tracks and mobilizes philanthropic efforts to end the HIV epidemic.

Davis has over 20 years of experience in human rights advocacy, grantmaking and social justice leadership in which he has advocated for the health care of vulnerable populations, according to an FCAA press statement.

“We are at a crucial time in the HIV response, with COVID having exacted a devastating impact on programs just as many funders that have been long-term supporters of HIV are significantly reducing their spending,” said Channing Wickham, FCAA board chair, in the statement. “HIV-informed grantmaking is more important than ever and Masen’s experience working with both funders and grassroots organizations is precisely what is needed to meet this moment.”

“Having worked in both grassroots advocacy and grantmaking environments throughout my entire career, I understand the importance of FCAA’s approach to HIV-informed funding,” Davis added. “To address the epidemic, we must also address the intersecting issues—such as poverty, inadequate education, stigma, racism, sexism, homophobia and transphobia—that fuel it. So much of the work FCAA does supports this, and I am very proud to now be a part of these efforts.”

Founded in 1987, FCAA connects and informs philanthropy to fight the HIV epidemic— for example, by encouraging private companies to fund HIV-related grants and programs. See the group’s tweet below on that topic:

Hey FCAA members, we have a pretty exciting announcement coming your way soon!!! I bet it has nothing to do with #grantsdata. Who am i kidding, of course it’s about DATA!!! #hivinformedfunding #resourcetracking #memberbenefits pic.twitter.com/EHqBc2cHNm

FCAA is also known for its annual reports that track HIV funding and trends. In the report from this spring, for example, FCAA noted that drugmaker Gilead Sciences led in private HIV funding, which marked “a dangerous reliance on a shrinking pool of funders.” For more details, see “Guess Who’s the New No. 1 Philanthropic Funder of HIV Programs.”

A similar report, from 2020, looked at HIV philanthropy that directly addressed Black Americans and listed the top five funders helping people of color. The results are found in “What Proportion of Private HIV Funding Supports People of Color?”