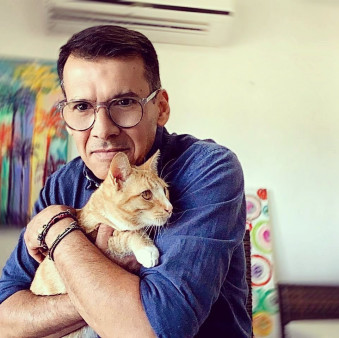 His unexpected death dealt a devastating blow to the many people who knew him personally as a friend, mentor and advocate.

The unexpected death on June 1 of beloved activist and filmmaker Marco Castro-Bojorquez, who had just returned to the United States after sheltering from COVID-19 in Mexico, dealt a devastating blow to the many people who knew him personally as a friend, mentor and advocate as well as to the many others he touched via his work and his art.

Having emigrated to the United States from Sinaloa, Mexico, in search of asylum in the 1990s, Castro-Bojorquez, who was gay and had been living with HIV since 2000, dedicated his life to advocating for the rights of immigrants, Latinos, people living with HIV and LBGTQ people. What’s more, he challenged homophobia and promoted Latino families’ acceptance of their queer children via two well-regarded documentaries, which helped earn him a Champions of Change award from the Obama White House in 2015.

Castro-Bojorquez was variously a community educator for Lambda Legal, a member of the U.S. People Living with HIV Caucus Steering Committee and a cofounder and cochair of the HIV Racial Justice Now Coalition. His advocacy was informed not only by his lived experience but also, in the words of his dear friend and trans advocate Bamby Salcedo, by “his passion for the betterment of everyone.” His loving, fighting spirit will be missed.