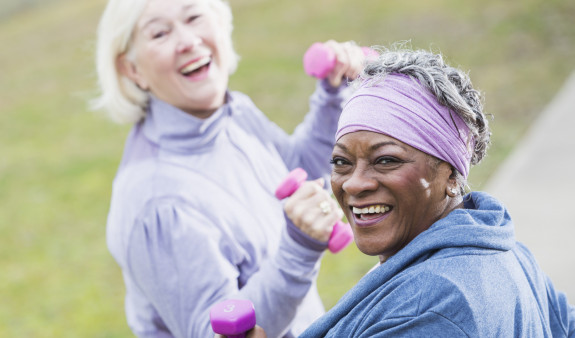 Markers of immune activation rose, but only temporarily, around the transition to menopause.

If you’re a woman living with HIV who is going through menopause, you know that you feel like you are on fire. New data from the Journal of Infectious Diseases suggests that your immune system might be, too—and that perimenopause may be an important time to attend to heart disease risk.

This is something to pay attention to because high levels of systemic inflammation, like that seen in people who drink heavily or have hepatitis C, have been associated with increased risk of death in people with HIV. Some research also suggests that women with high soluble CD14 (sCD14) levels are more likely to have cardiovascular problems. Women with HIV are already at increased risk for heart attacks compared with their male peers.

Brandilyn Peters, PhD, of the Department of Epidemiology and Population Health at Albert Einstein College of Medicine in New York City, and colleagues looked at data from 350 women enrolled in the Women’s Interagency HIV Study. They defined menopause as being complete if a woman hadn’t had a period for 12 months. They tracked the women between 2013 and 2015, looking at lab results prior to menopause and after.

The researchers checked for immune activation and systemic inflammation biomarkers including interleukin-6 (IL-6) and tumor necrosis factor receptor 1 (TNFR1), as well as markers of activation of innate immune cells (sCD14 and sCD163). They also looked at markers of gut barrier dysfunction, which is associated with immune activation.

Women were excluded from the analysis if they were using hormone replacement therapy or if they had undergone surgical menopause as a result of a hysterectomy and oophorectomy and if they had autoimmune conditions, cancer or hepatitis B or C.

During the two years of follow up, eight women went through menopause. Overall, markers for gut dysfunction weren’t different between women pre- and postmenopause, and neither were the markers for systemic inflammation, IL-6 and TNFR1.

However, the immune activation markers sCD14 and sCD163 were higher in postmenopausal women compared with those who had not yet gone through menopause. Levels of sCD14, especially, were much higher (about 161 nanograms per milliliter higher). This was after controlling for HIV viral load, CD4 count, age, race, hormonal contraception, education, employment, body mass index and alcohol and cigarette use. In fact, during perimenopause, sCD14 rose by 250 ng/ml per year.

“Interestingly, the association of menopause with sCD14 was only observed among women with controlled HIV,” wrote Peters and colleagues.

The rise in sCD14 didn’t last, though. The study authors noted that it “did not appear to be maintained post-menopause.”

Click here to read more news on HIV and menopause and healthy aging with HIV.