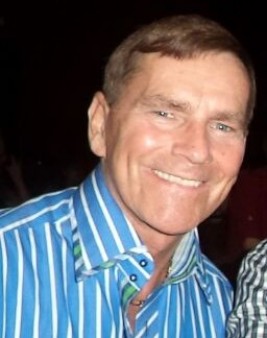 I am an openly gay man. In 2002, I was 49 years old and had a successful career. During that career, I traveled to U.S. embassies and consulates in more than 80 countries. It was a great job and I enjoyed staying at high-end hotels, talking with ambassadors and other high-level officials on a routine basis.

I also had more than my fair share of sex everywhere I went. Every few years I got tested for HIV and always tested negative. I thought to myself, “I’ll never get HIV.” I had so much going for me.

I tested HIV negative in 2000. In August 2002, I was in Africa for three months and I developed a slight fever of 100 to 101 degrees that did not go away. I started losing weight. I was too busy to see a doctor so I kept taking Tylenol for the fever. It would would go away and come back a few hours later.

In November 2002, I was in Tokyo and I was rapidly losing weight. I was extremely tired, losing energy and waking up in pools of sweat, and I could barely get around. I developed a bad cough and I was having trouble breathing. It hurt to eat; it even hurt inside my chest and belly when I drank cold water or hot coffee. I thought I had cancer. I finally went to a medical facility in Tokyo where they treated me for malaria. I tested negative for HIV.

A week later I was feeling a bit better and I flew home. My symptoms returned and my regular primary care physician could not get my fever to break or figure out what was wrong with me. He sent me to an infectious disease physician (IDP). I showed the IDP the paperwork from the medical center in Tokyo, which stated I had tested HIV negative.

The IDP looked at me and said, “I know what is wrong with you. Let’s take some blood and X-rays and come back in three days.” I returned to his office and to my shock not only did I have AIDS, the X-rays determined that I had pneumocystis pneumonia. I asked the doctor, “Isn’t that what killed so many people in the ’80s and ’90s?” He said yes and told me I could get back in good shape but I had to do exactly what he said and believe that I would get better.

That was one heck of a Christmas present in 2002. He put me on various medications immediately. I lay there in bed over the next few days coughing and at times gasping for breath, and wondering if that gasp was going to be my last. Fortunately I had the support of my children and some great longtime friends. Some of my friends had been living with HIV/AIDS for many years. They helped me work through the stigma and overall health issues and made me realize that I would be OK. After two months I felt better and I stubbornly pushed to go back to work.

I took my medications. I gained a lot of medical knowledge and had the will to push on. I traveled from South America to Africa, to the Middle East and Europe for work. Unfortunately, I kept experiencing spikes of high fevers for days and debilitating explosive dysentery. I would take the Bactrim for a week until the fever seemed to go away. I was getting weaker with extreme fatigue and had pains in the abdomen.

In June 2004 I was back home and the fevers developed again. I went to see my IDP and he put me in the hospital for a week of tests/scans/MRIs to determine the cause. A week later I was diagnosed with chronic ulcerative colitis and released from the hospital with even more medications to take for the rest of my life. I was extremely weak and was having some cognitive memory problems as well as the incessant dysentery, fatigue, neuropathy and severe arthritis pain.

Because all of my health problems, fatigue and pain, my IDP told me I could no longer work and I should go on permanent disability. At this point I was taking about 20 prescription pills a day at five different intervals. I filed the paperwork for Social Security disability and was approved in 11 days.

Afterwards I felt lost and like a failure as a man. I had learned growing up that a man is his career. My life just turned upside down once again. I saw something online about meetings that people with AIDS (PWAs) could attend and learn how to be helpful to others. I attended PWA meetings and Ryan White Planning Council meetings in D.C., and joined the Northern Virginia HIV/AIDS Consortium to educate myself and be there for others.

As the last 11 years have passed I have learned to live and cope with the numerous other sicknesses and hospitalizations that have come up. Are the dozen or so new maladies that I have been diagnosed with due to the effects of long-term HIV? From the side effects of the 14 prescriptions that I am now taking? As a result of old age or a combination of it all? I do not know. Recent studies have indicated that PWAs are prematurely aging by 10 to 15 years. Is that the reason I am now coping with additional disorders and ailments?

Regardless, I am extremely grateful to be here with the love, care and support of so many people in my life. I may be 61 going on 71, but I plan to be around for many years to come and do my best to be of help and service to others.

What three adjectives best describe you?
I have an optimistic attitude about almost everything in my life. I am confident in who I am and try to be supportive and caring for all of those that I know in my life.

What is your greatest regret?
My greatest regret is not finishing college. Although my career soared, so did my travel, which kept me on the road extensively and away from my children and finding a stable relationship with a partner.

What keeps you up at night?
Aches and pains of getting older

If you could change one thing about living with HIV, what would it be?
The STIGMA! Even within the gay community those living with HIV are still ostracized in dating and from various groups, units and factions in life.

What is the best advice you ever received?
To know that as long as I had a positive attitude in life, I stood a better chance of conquering anything I attempted to do, whether it be sickness, hardship or the adversities of life.

What person in the HIV/AIDS community do you most admire?
My doctor who has guided me along in my journey, kicking me in the butt when I felt down because things were not always to my personal liking

What drives you to do what you do?
My three children and five grandchildren. I need to be here to guide them through life and my partner of seven years needs me around to guide him on a proper growth path.

What is your motto?
You learn something new in life every day. Even if it is just the weather.

If you had to evacuate your house immediately, what is the one thing you would grab on the way out?
Hmm…my meds, my jewelry and a hard drive

If you could be any animal, what would you be? And why?
A bald eagle. They soar so beautifully, effortlessly and majestically through the air.