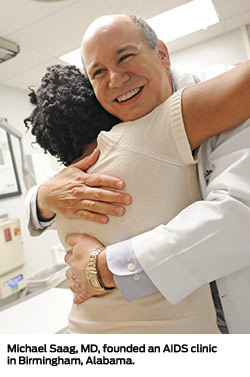 Michael Saag, MD, was training to become a cardiologist in the early 1980s when he was sidetracked by the emerging AIDS epidemic. Lucky for us. He soon became a leading researcher and doctor, opening an AIDS clinic in 1988 through the University of Alabama at Birmingham.

In his memoir Positive: One Doctor’s Personal Encounters With Death, Life, and the US Healthcare System, Saag offers more than a fascinating viewpoint of the virus. Through heartfelt (and at times harrowing) stories, he weaves together a parallel narrative of the health care business.

In 2014, Saag still sees many challenges facing people living with HIV. The biggest? “Internalized stigma. There’s a feeling that they have done something wrong. They feel ashamed about their status and don’t want to share it. That affects their health care. They hide medicines or don’t take them if somebody’s around.”

Thanks to Obamacare, people can now avoid financial ruin if they have a serious illness, Saag explains, but our health care is still ailing. “We have a fragmented, chaotic system,” he says. “Unless we pull together like we did in the fight against AIDS, to fight against this inefficient system that’s ridiculously expensive, we’re never going to have the change we want."