A new version of Truvada (tenofovir disoproxil fumarate, or TDF/emtricitabine) that includes an updated tenofovir, known as TAF, worked as well as its predecessor in protecting monkeys against a simian version of HIV, aidsmap reports. However, another study, an early trial looking at the new Truvada in women, found that the updated Truvada’s levels in rectal and genital tissue samples were lower than expected. This suggests that the new Truvada may not be as effective as PrEP as the standard tablet currently approved for HIV prevention.

Researchers from both studies presented their findings at the 2016 Conference on Retroviruses and Opportunistic Infections (CROI) in Boston.

In November, the U.S. Food and Drug Administration (FDA) approved Gilead Sciences’ Genvoya (elvitegravir/cobicistat/emtricitabine/tenofovir alafenamide, or TAF), the first tablet to contain the new version of tenofovir, which is called TAF for short, while the standard tenofovir is known as TDF. Gilead applied for approval of the new TAF-inclusive Truvada in April 2015; a decision is expected next month.

Because TAF more effectively targets cells, a dose about one tenth that of TDF is required. Ultimately, 90 percent less drug winds up in the bloodstream, where it may cause toxicities. Research has shown that TAF is safer to the bones and kidneys that TDF.

A TAF-inclusive Truvada approval will not include a green light for use as PrEP. If the tablet does advance into further clinical trials in humans, years will have to pass before it is ultimately approved for HIV prevention purposes.

In the monkey study, researchers gave macaques a single dose of TAF to determine what dose would be equivalent to that used in humans. After giving respective oral doses of 0.5, 1.5 and 4.5 milligrams per kilogram to four monkeys for each dose, the researchers conclude that the 1.5 mg/kg dose led to drug levels equivalent to a 25 mg daily dose among humans. After taking rectal biopsies, the investigators found that levels of tenofovir diphosphate (TFV-DP, the active form of tenofovir) were lower in rectal tissues compared with what has been seen with TDF use.

Next, researchers gave six macaques 1.5 mg/kg of TAF and 20 mg/kg of emtricitabine, the second drug in Truvada. Six other macaques were given a placebo. The scientists then gave rectal exposures of SHIV, HIV’s simian cousin, to all the animals during the following 1 to 24 hours, plus repeated exposures for up to 19 weeks.

However, the small human trial suggests that the jury is out as to whether TAF-inclusive Truvada will indeed have standard Truvada’s power to protect against the virus.

Researchers gave eight HIV-negative women a single 25 mg dose of TAF, then measured levels of tenofovir and TFV-DP in their cervical tissue, vaginal tissue, cervicovaginal fluid and colorectal tissue during a two-week period. The scientists believe their findings may also apply to men when it comes to the rectal tissue results.

In previous research, one 25 mg dose of TAF led to TFV-DP levels in peripheral blood mononuclear cells (PBMCs) that are seven times greater than a single 300 mg dose of TDF. So the researchers predicted that TAF would lead to drug levels similarly high by comparison to what they would be after a TDF dose.

As it turned out, the drug concentrations in the genital and rectal tissues generally fell far below the researchers’ expectations. This held true despite the fact that drug levels in plasma and in cells were in line with what has been seen in previous research. Tenofovir levels were 19-fold lower than seen with TDF in plasma, while on the other hand TFV-DP levels were nine-fold higher in PBMCs. Drug concentrations in rectal tissues were around 10-fold below those seen with TDF. Levels of tenofovir were two- to 10-fold lower in mucosal tissues, while TFV-DP levels were 13-fold lower in rectal tissue, and were half as high in the female genital tract.

Further research is needed to better understand these findings, including exploration into whether protection against HIV relies on either tenofovir or TFV-DP levels in the plasma, genital or rectal tissues, or if sufficient levels of both tenofovir and TFV-DP are needed for protection. 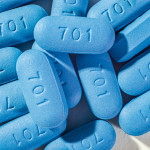