HIVMA webinar: Monkeypox in the U.S.: An Update for Clinicians & the LGBTQ Community Screenshot by Liz Highleyman

In May 2022, an outbreak of monkeypox began in Europe and North America. While this outbreak has mainly affected gay and bisexual men so far, anyone can get monkeypox through close personal contact.

On June 13, the HIV Medicine Association (HIVMA) hosted a monkeypox update for clinicians and the LGBT community. The webinar, a collaboration between researchers, public health officials and community advocates, was co-organized by the Infectious Diseases Society of America, Fenway Health, GLMA, NASTAD and PrEP4All.

Watch a recording of the webinar:

Monkeypox is not a new disease. It has mainly been seen in Central and West Africa, and this is the largest outbreak outside regions where the virus is endemic. The U.K. Health Security Agency (UKHSA) first reported the outbreak in early May, and the United Kingdom has had 470 confirmed cases as of June 12. The World Health Organization (WHO) has confirmed 1,285 cases in more than two dozen non-endemic countries as well as 1,536 suspected cases in Africa this year.

In the United States, the Centers for Disease Control and Prevention (CDC) reports 65 confirmed monkeypox cases as of June 13—and the number is growing daily.

Most cases in non-endemic countries are among gay, bisexual and other men who have sex with men. Many of the men reported recent international travel, and many visited saunas or attended events including a Pride festival in the Canary Islands.

Monkeypox Transmission and Symptoms
The monkeypox virus is transmitted from animals and from person to person through close contact. This can include skin-to-skin contact, kissing and contact with contaminated clothing, bed linens, towels or surfaces. It also can be transmitted through respiratory droplets at close range, but it does not spread over longer distances like the coronavirus that causes COVID-19.

It is not known whether monkeypox is sexually transmitted in semen or vaginal fluid, but it can spread via contact with sores during sex. Experts think transmission happens mainly—or perhaps only—when people are symptomatic.

Currently, monkeypox testing in the U.S. is performed at some 70 state laboratories. These labs can detect orthopox (the virus family that includes smallpox and monkeypox), but a monkeypox diagnosis must be confirmed by additional testing at the CDC. James Krellenstein of PrEP4All expressed concern that the full extent of community spread is unknown due to limited testing.

But as Boghuma Titanji, MD, PhD, of Emory University explained, some cases in the current outbreak had symptoms that differ from classic monkeypox, including a small number of sores, lesions that are not all at the same stage at the same time and lack of accompanying flu-like symptoms. According to the CDC, some men have tested positive for both STIs and monkeypox. 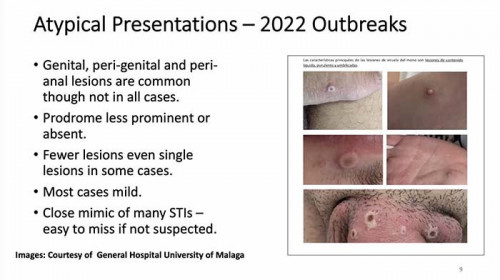 Monkeypox Treatment and Vaccination
Most people with monkeypox recover without treatment. But the sores can leave scars, and people with more severe disease may develop complications. Severe outcomes are more common among young children, pregnant women and immunocompromised people. People with well controlled HIV do not appear to be at greater risk, Titanji said, but those who are not on antiretroviral treatment and have a low CD4 count may have worse outcomes.

If people test positive for monkeypox, biomedical tools are available to reduce the severity of illness and prevent onward transmission, Krellenstein emphasized.

For people at risk for more severe illness, antiviral medications used to treat smallpox can also be used for monkeypox. These include tecovirimat (TPOXX), cidofovir (Vistide) and brincidofovir (Tembexa). However, according to the CDC’s Agam Rao, MD, these drugs are held in a national stockpile and are not commercially available in the U.S. The CDC is currently distributing these medications as needed.

An older live vaccinia virus vaccine (ACAM2000) can cause side effects, especially in people with compromised immunity or skin conditions. In 2019, the Food and Drug Administration approved a new, safer non-replicating smallpox and monkeypox vaccine (brand names Jynneos, Imvanex and Imvamune). The U.S. maintains a national stockpile of smallpox vaccines, but these are mostly the older version, and Jynneos is in short supply.

Monkeypox can be controlled through targeted vaccination of close contacts of an infected person. The CDC is distributing the Jynneos vaccine for administration to high-risk contacts of known cases and health care workers. Because monkeypox has a long incubation period, the vaccine can be given up to two weeks after exposure, but it is most effective within four days, Rao said. At this time, experts do not recommend vaccination for the general population.

Public health officials and advocates emphasize that anyone can get monkeypox, but the outbreak in Europe and North America is spreading mostly within social and sexual networks of gay and bi men.

“There’s no such thing as a ‘gay disease,’ but the outbreak in the global north appears to be concentrated among gay men and men who have sex with men,” said Adrianna Boulin of Fenway Health, which has produced a fact sheet on monkeypox and gay and bisexual men.

David Harvey, executive director of the National Coalition of STD Directors, noted that people have been hesitant to focus on the gay community for fear of triggering the kind of stigma surrounding HIV. But health officials and advocates recognize the importance of bringing awareness and resources to the groups most heavily affected.

“Stigma distorts science,” director of the CDC’s Division of HIV/AIDS PreventionDaskalakis said during another monkeypox forum last week hosted by InterPride. “Monkeypox can potentially affect everyone, but we need culturally appropriate information to reach networks that are experiencing increased transmission right now. Pride is a great way to get messages out—we’ve been using it for decades to get out information out about HIV and STIs.”

Daskalakis said the CDC is working specifically to get the word out to the LGBT community. To that end it has produced a factsheet on Social Gatherings, Safer Sex and Monkeypox.

With Pride season in full swing, most experts and advocates don’t recommend cancelling events or closing venues where people have close contact, including sex. But people with a rash or other symptoms should refrain from sex and other close contact, seek medical care, get tested and cooperate with contact tracing. Those who think they may have been exposed should self-monitor for symptoms for three weeks.

It’s time to hold back if you’re sick or have a rash, Daskalakis advised. Gay and bi men should have a “very low threshold” for seeking care, even for mild symptoms, and providers should have a similarly low threshold for monkeypox testing, even if sores look like common STIs.

“Take a pause from social activities and sex until you know what’s going on,” he says. “If you see something, do something.”