In New York City, on the Tuesday evening before World AIDS Day 2018 at event space Guastavino’s, a lot of noise was being made for the MTV Staying Alive Foundation (SAF), which was celebrating 20 years of campaigning around the issues of HIV and sexual/reproductive health and rights. Music icons sat in the audience and appeared onstage, but the real stars were the grantees and advocates who work hard to get the foundation’s message to the communities that need it most.

Georgia Arnold, the organization’s founder and executive director, opened the evening by shedding light on the foundation’s mission: “Twenty years ago, MTV Staying Alive stood up and said, ‘We will protect the next generation by investing in them; we will give them the power to use their voices, their experiences to influence their own universes.’” 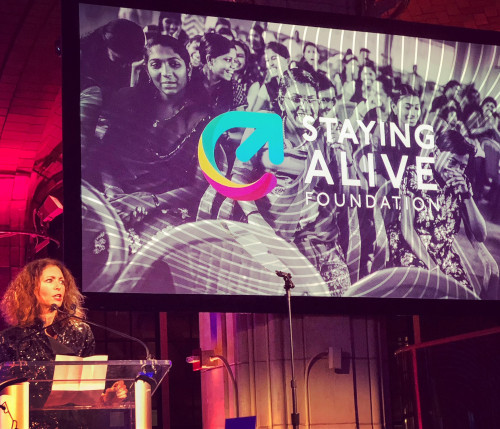 For two decades, the international foundation has done exactly that by producing content across MTV channels in nearly 180 countries, distributing condoms and awarding grants to organizations dedicated to expanding sexual/reproductive health and rights and stopping the spread of HIV among young people.

Needless to say, the gala was fun and eventful. Harry Santa-Olalla—a witty and highly effective auctioneer—raced between tables, playfully taking jabs at stylish guests, encouraging them to set down their cocktails and use the digital tablets strategically placed on their tables in order to make donating as easy as checking one’s text messages. Brooklyn-based five-piece band Phony Ppl kept the energy level high during dinner. And for an organization that has bridged the gap that often separates great ideas from sufficient funding, Guastavino’s, located under the Queensboro Bridge, was a quite fitting venue.

Among the guests and supporters of the foundation in attendance were Swati Dlamini-Mandela (granddaughter of anti-apartheid legend Nelson Mandela) and Alicia Keys, who presented an award to Bob Bakish, president and CEO of MTV’s parent company Viacom, as a way to honor the media empire’s support of MTV’s foundation. Keys made a special point to discuss how a 2002 trip to Africa on behalf of Staying Alive impacted her: “It was…the first time I was confronted by the scope of the AIDS pandemic. It totally changed the course of my life in the most important and powerful way.” 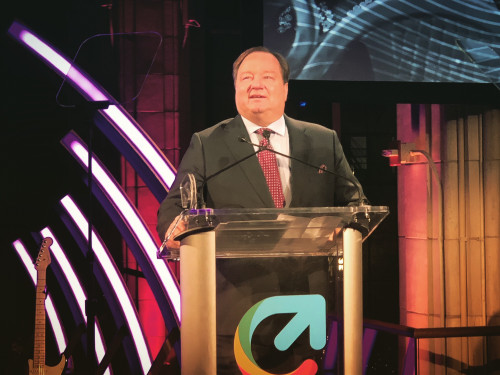 Bakish spoke about MTV’s unique ability to influence and educate youth about HIV. One of Staying Alive’s greatest assets is MTV’s vast reach. In fact, you’d be hard-pressed to find a better vehicle for HIV awareness messaging than MTV Shuga, a scripted drama set in Africa and produced by Staying Alive. MTV Shuga showcases storylines that involve sexual health and HIV and how those two realities intersect. Fun fact: Academy Award–winning actress Lupita Nyong’o starred in the first few seasons of the show, which debuted in 2009.

While MTV Shuga inspires its viewers to get tested for HIV and be more aware of the many ways in which stigma affects those living with the virus, the heart of Staying Alive’s mission is its grant giving. That element was front and center at the gala—the foundation exceeded its intended goal of raising $100,000 at the event; by night’s end, the total donations had surpassed $500,000. This was aided by the sale of auction items. The most coveted on the block had to be the MTV “Golden Ticket” VIP Package, which included tickets to both the MTV Video Music Awards and the MTV Movie & TV Awards and fetched the highest bid of the evening, $25,000. This amount was unexpectedly doubled when Bakish offered an additional Golden Ticket package to the bidder who lost the original bid. 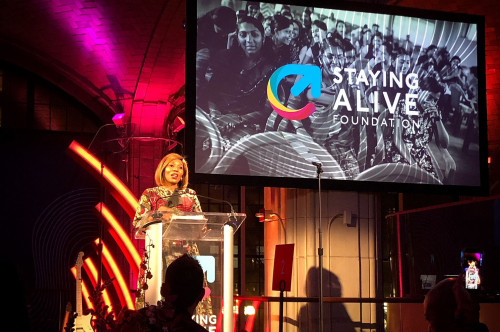 Diamini-Mandela was on hand to recognize Staying Alive’s board vice-chair, Henry Luyombya, who had spoken with her grandfather, Nelson, about the HIV epidemic in Africa for an MTV documentary. Luyombya, who is living with HIV, was the very first recipient of an MTV Staying Alive Foundation grant. 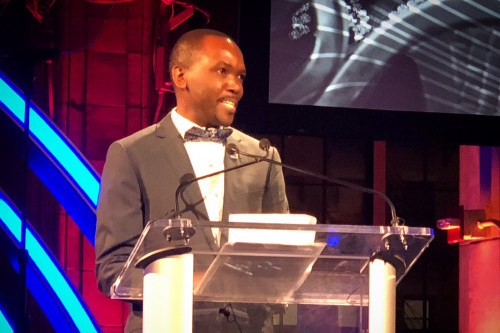 Diamini-Mandela said Luyombya’s journey from testing positive to receiving the first grant to becoming vice-chair of the foundation likely had her grandfather “smiling down on this room tonight.” 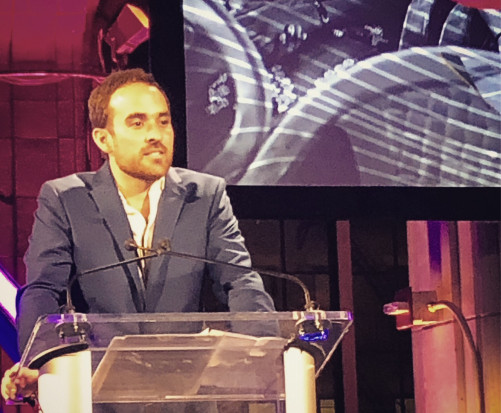 Other grantees honored at the gala were Tyler Spencer and Shirley Sabrina Oruko. Spencer founded the Washington, DC­–based organization The Grassroot Project, which utilizes sports and athletes to educate children and teenagers about HIV in DC, one of the regions in the United States most affected by the HIV epidemic. Spencer acknowledged that the grant was a game changer for the organization, which would have likely folded had it not received crucial funding in its infancy. Oruko, who is from Nairobi, Kenya, received funding this year for Partners in Action, a youth-led organization that empowers young people to make safer choices concerning their sexual health.

The foundation’s grants do more than fund initiatives created by young people for young people. Quite a few of the grants have targeted often-forgotten, high-risk populations, such as inmates and sex workers. In total, the MTV Staying Alive Foundation has disbursed more than $6 million in grants. What’s more, it has helped distribute more than 9.7 million condoms and reached more than 3.8 million young people directly, including through HIV testing in 72 countries. 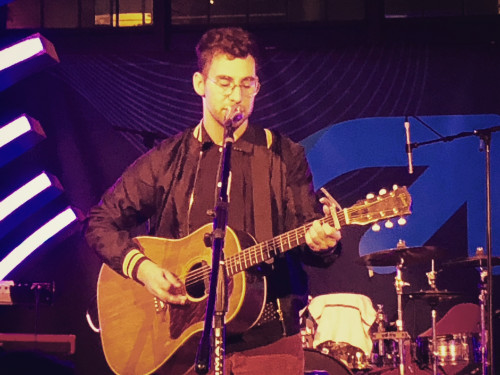 The gala ended with a performance from Jack Antonoff, lead singer of Bleachers, who played a four-song acoustic set, including the Bleachers fan favorite “I Wanna Get Better.” 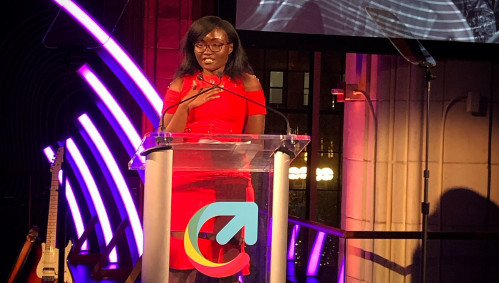 The following day, Oruko was still processing the experience of the gala. “Sharing my story at the MTV Staying Alive Foundation fundraising gala 2018 was and is still beyond amazing to me,” she said. “This was such a humbling experience. As a social worker and community worker, I am grateful to MTV SAF for giving me the platform to share my story. Dreams definitely come true!”