“Doing It My Way” highlights the many different reasons to get tested for HIV.

Wednesday, June 27, marks National HIV Testing Day (NHTD) 2018. This year’s theme, according to the Centers for Disease Control and Prevention (CDC), is “Doing It My Way, Testing for HIV.”

The theme plays off a larger HIV testing and prevention campaign called “Doing It,” which is part of the CDC’s Act Against AIDS initiative. The micro-campaign highlights the fact that people have unique reasons for getting tested. The campaign encourages folks to share their HIV testing stories on social media with the hashtag #DoingItMyWay and, in Spanish, #HaciéndoloAMiManera. For example, you could tweet or describe in a Facebook post what motivates you to get tested for HIV. Or you could simply promote HIV testing and awareness, like some of the tweets included here.

We enjoyed meeting many of you at #LatinxPride and learning how you’re #DoingItMyWay! #HIV pic.twitter.com/YRhxGK5l4D

About 1.1 million people in the United States have HIV, and 1 in 7 of them don’t know it. Many people have HIV for years [1.86 MB] before they get a diagnosis. For those who are living with undiagnosed HIV, testing is the first step in maintaining a healthy life and reducing HIV transmission. CDC recommends that everyone between the ages of 13 and 64 get tested for HIV at least once as part of routine health care and those at high risk get tested at least once a year. Some sexually active gay and bisexual men may benefit from more frequent testing (every 3 to 6 months).

Knowing your HIV status gives you powerful information to help keep you and your partner healthy. Join us on NHTD to raise awareness about the importance of HIV testing and early diagnosis of HIV. Share why and how you are getting tested for a chance to be featured on the “Doing It My Way” social wall.

You can download social media kits and resources from the CDC here. 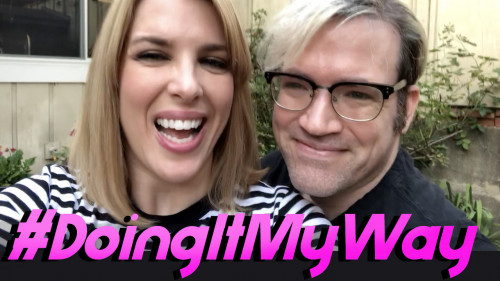 POZ blogger Shawn Decker and his partner, Gwenn, pictured above, participate in the CDC’s awareness campaign. For Decker’s recent blog post on the topic, read “#DoingItMyWay and Why I’m Positively for HIV Testing.”

Did you know that National HIV Testing Day is Wednesday? NLGJA is encouraging everyone to get tested and our friends, including @frandrescher, are helping us spread the word! Discover your testing options and locate a testing center at https://t.co/Yo9mSDf7TO! #DoingItMyWay pic.twitter.com/LjVwoXvWwz

The CDC offers a wide variety of HIV testing resources, including social media banners for #NHTD and its #DoingIt campaign here.

And to learn about unique testing incentives at a Southern health center, read the POZ article “Want Beyoncé and Jay-Z Tickets? Then Get Tested for HIV.”