Here’s why members of the Native community chose the first day of spring to observe NNHAAD.

Launched in 2007, the awareness day is observed on the first day of spring, officially known as the vernal equinox, which falls on March 19, 20 or 21, depending on the year.

Native communities chose the first day of spring to mark NNHAAD because “spring represents a time of equality and balance and is the only day when day and night are at equal lengths. It is considered a time of profound change, new beginnings and birth; a celebration of life for all people,” explains NNHAAD.org.

“In many Native cultures across the United States,” the website continues, “the four seasons are highly respected because they closely represent the cycle of life.”

NNHAAD serves as a reminder for members of these communities to get tested for and educated about HIV, to honor those lost to the epidemic and to raise awareness.

According to Centers for Disease Control and Prevention (CDC) statistics, AI/AN represent about 1.3 percent of U.S. residents. HIV rates are proportionate to the  population’s size—in 2017, for example, about 1 percent of new HIV cases were diagnosed among AI/AN. However, diagnoses have increased. From 2010 to 2016, the annual number of new HIV cases among this population increased 46 percent, from 157 cases to 230. Among gay and bisexual AI/AN, the rates increased 81 percent, from 90 to 163.

Overall, the CDC estimates that about 3,600 AI/AN were living with HIV in 2016 and that 82 percent had received an HIV diagnosis.

The CDC also offers HIV data on Native Hawaiians and Other Pacific Islanders (NHOPI). This group makes up 0.2 percent of the U.S. population. In 2016, among NHOPI, nine women and 45 men tested positive for HIV. Gay and bisexual men account for 65 percent of HIV cases among NHOPI. 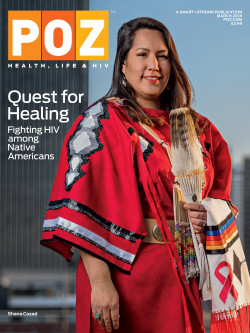