Watch “Positively Native,” a short film on HIV issues in Native communities, and raise awareness for NNHAAD on March 20.

Sample social media posts that increase awareness of #NNHAAD are posted throughout this article.

New #HIV diagnoses among American Indians/Alaska Natives increased by 11% from 2018 to 2019. This #NNHAAD, explore the impact of HIV on Native communities: https://t.co/5K81aRJ56H pic.twitter.com/JOCGL4hIxJ

The 2021 theme is “Zero is Possible Together: Innovation + Awareness.” The slogan suggests that it’s possible to end the epidemic—that is, to have zero new HIV cases and zero stigma—by working together and using the latest HIV science, such as the fact that people with HIV who take meds and maintain an undetectable viral load can’t transmit the virus through sex, often referred to as Undetectable Equals Untransmittable, or U=U.

HIV education, prevention, treatment and care are key to ending the epidemic among Native communities. Overall, the rate of HIV among all people in the United States decreased 7% from 2014 to 2018, when 37,968 people were diagnosed with HIV, according to the Centers for Disease Control and Prevention, but the rate among American Indians and Alaska Natives increased 11% from 2018 to 2019, rising from 186 new cases to 206, reports AIDSVu.org. What’s more, Native women in these groups saw a 50% increase from 2018 to 2019.

AIDSVu.org offers a collection of the latest HIV data along with sharable graphics. Regarding NNHAAD, AIDSVu writes:

According to the Centers for Disease Control and Prevention, factors such as high rates of sexually transmitted diseases among AI/AN populations, alcohol and drug use, and cultural stigma result in disproportionate HIV rates among Native communities.

It is also important to recognize how social determinants of health can negatively impact HIV-related health outcomes for Native communities due to a lack of access to affordable health care and financial insecurity. For example:

For #NNHAAD, Vu spoke with Richard Haverkate of @IHSgov on the impact of injection drug use on #HIV and #HepatitisC in Native communities. Read the new Q&A: https://t.co/SmlVp8BOb3

To help raise awareness of these issues, the medical production company Buffalo Nickel Creative, which is based in Oklahoma and Los Angeles, created a short documentary video titled Positively Native (you can view it at the top of this article or on YouTube).

“I see that our communities are really resilient in lots of ways, and then in some ways, we’re really fragile,” Cozad says in the film. “Having HIV in a Native community, it gets tricky. A lot of people are afraid of you. And I’ve experienced that. It can be really hard because we come from proud people with a strong heritage and strong culture. But we can want to help just as much as the next person, and if our own communities don’t know how to address that and talk about it, then it makes it hard when you’re living with this.”

Hall underscores this point by recalling people he knew who were living with HIV who, fearing that their HIV-positive status would bring shame to their families, didn’t seek treatment and died as a result. 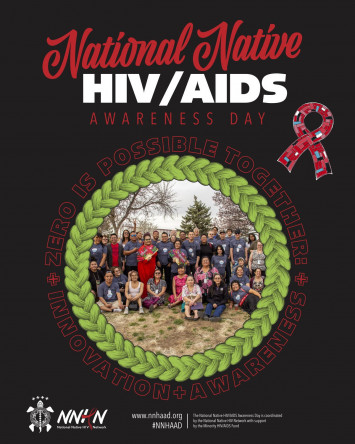 In addition to the resources on AIDSVu.org and NNHAAD.org, HIV.gov offers more information about NNHAAD, including tool kits, graphics, a fact sheet and details about the federal Indian Health Service HIV/AIDS Program.

2018’s March cover of POZ featured Cozad, who has been living with HIV for more than two decades. For more, read “Quest for Healing: Overcoming the Challenges of Fighting HIV Among Native Americans.”

HIV awareness days take place throughout the year. For a list and details, see “2021 HIV/AIDS Awareness Days,” which includes a printable PDF.