The CDC’s estimate of the proportion of all people living with HIV in the United States who have hit certain key benchmarks on the way to successful treatment for the virus. CDC

Nearly 50 Percent of People With HIV in the U.S. Are Undetectable

After a long delay, the CDC has updated key epidemic estimates, finding better rates of diagnosis, treatment and viral suppression.

At long last, the Centers for Disease Control and Prevention (CDC) has updated its estimates for key measures of the United States’ control of the HIV epidemic. An important new surveillance report issued by the federal agency estimates that out of the 1.1 million people living with the virus in 2014, 85 percent were diagnosed, 62 percent had been linked to medical care, 48 percent were retained in regular medical care and 49 percent had a fully suppressed viral load, also known as being undetectable.

This estimate of the care continuum, sometimes referred to as the treatment cascade, supplants the 2011 estimates that painted a particularly dismal picture of the U.S. health care system’s control of the national epidemic. The older estimate put the size of the epidemic at 1.2 million and figured that 40 percent were retained in regular care, 30 percent were prescribed antiretrovirals (ARVs) and just 30 percent were virally suppressed.

The old continuum, based on 2011 data.AIDS.gov

More recently, researchers had begun to suspect that the 2011 figures were underestimates to begin with. Additionally, the CDC and others have released research findings in the recent past suggesting that an increasing proportion of the U.S. HIV population is virally suppressed.

Because the 2014 and 2011 estimates relied on different methodologies, it is not necessarily possible to draw a direct comparison between them. Regardless, the new estimate indicates that among all nations United States is faring better than average in its efforts to successfully treat its HIV population and is no longer dismally toward the bottom of the rankings, as the 2011 estimates suggested.

Last week, ahead of the 9th International AIDS Society Conference on HIV Science in Paris (IAS 2017), the Joint United Nations Programme on HIV/AIDS (UNAIDS) issued a report on the global epidemic that estimated that about half of the world’s HIV population of 36.7 million is on ARVs and 43 percent has an undetectable viral load.

The Paris conference brought more good news on the HIV treatment-as-prevention (TasP) front. The Opposites Attract study of gay male couples in which only one partner had HIV saw no new transmissions among them when the HIV-positive partner was on ARVs and had an undetectable viral load. This data set adds to the considerable existing evidence that full viral suppression is associated with a vanishingly small, or negligible, risk of transmission; the risk may in fact be zero.

With only 49 percent of people living with HIV in the United States benefiting from such a reduction in transmission risk, a glass-half-empty can certainly apply; however, when compared with the previous presumption of only 30 percent viral suppression among the HIV population, there is certainly great reason to celebrate a glass half full.

In fact, when in February the CDC released its new estimate of the rate of HIV transmission in the United States, researchers in the agency attributed the 18 percent decline in new annual infections between 2008 and 2014 at least in part to a rising viral suppression rate. The rate had remained frustratingly stagnant for two preceding decades.

“Half of Americans with HIV now have the virus under control,” Jonathan Mermin, MD, MPH, director of the CDC’s National Center for HIV/AIDS, Viral Hepatitis, STD and TB Prevention, said in a press release. “We can’t stop halfway—we can test, treat and defeat HIV.”

Because the CDC based its new care continuum estimate on data that is already three years old, there is good reason to believe the national viral suppression rate has already risen above 50 percent.

In 2012, U.S. treatment guidelines shifted to recommend treatment for all people with HIV, rather than only for those below a particular CD4 count—a threshold that rose steadily over the years as evidence accumulated that earlier treatment is preferable. In 2015, the landmark START study proved definitively that starting ARVs as soon after diagnosis as possible provides a strong net health benefit compared with delaying until CD4 cells dissipate.

The CDC report shone a light on the searing disparities at the core of the HIV epidemic. Young people lag far behind others living with the virus, a fact that holds true globally according to the UNAIDS report. Only an estimated 56 percent of 13- to 24-year-olds living with the virus in the United States have been diagnosed, and a mere 27 percent have an undetectable viral load. 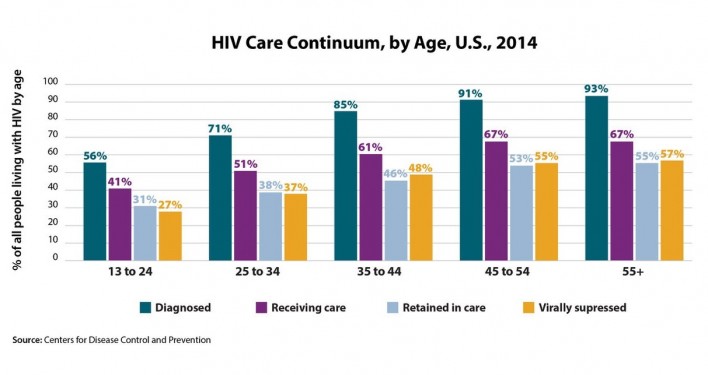 A breakdown of the CDC’s’ care continuum estimates based on age.CDC

When broken down by race, diagnosis disparities were not as stark. An estimated 88 percent of whites, 84 percent of Blacks and 83 percent of Latinos living with the virus know their HIV status.

Racial disparities in viral suppression rates are much more concerning: 57 percent of whites, 48 percent of Latinos and 43 percent of Blacks living with HIV are estimated to have achieved an undetectable viral load. 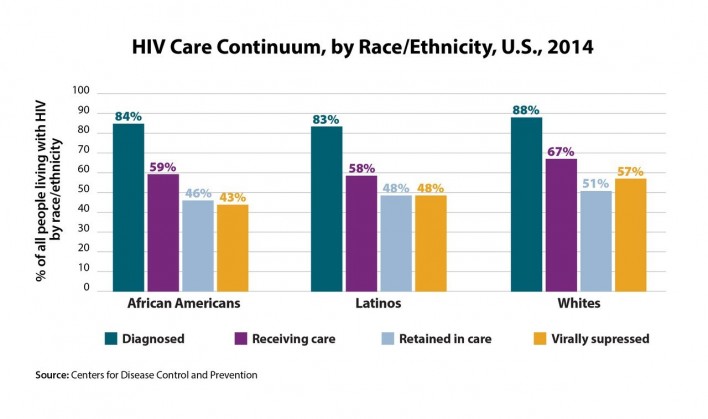 A breakdown of the CDC’s’ care continuum estimates based on race/ethnicity.CDC 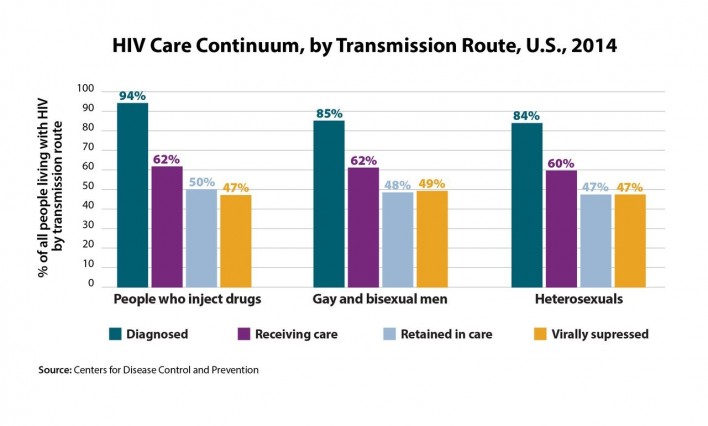 A breakdown of the CDC’s’ care continuum estimates based on how individuals contracted HIV: injecting drug use, sex between males, and heterosexual sex.CDC 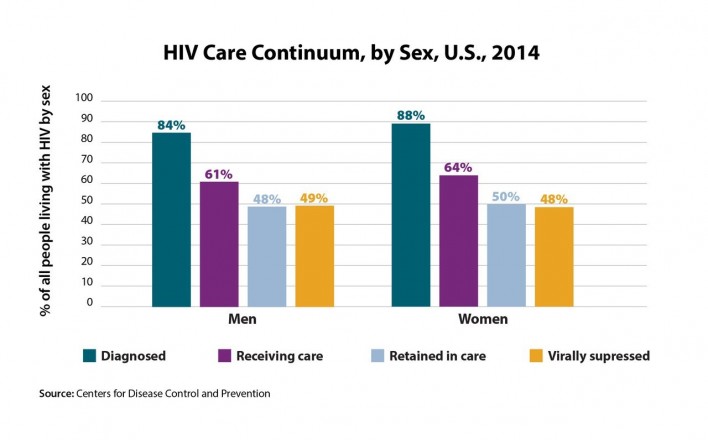 A breakdown of the CDC’s’ care continuum estimates based on sex.CDC

For more details from the CDC report, click here.