A study comparing on-demand and daily PrEP has seen lower side effects with daily use and an overall trend of increased sexual risk-taking.

Increasing evidence suggests that the on-demand dosing protocol of Truvada (tenofovir disoproxil fumarate/emtricitabine) as pre-exposure prophylaxis (PrEP) is highly effective at preventing HIV acquisition among men who have sex with men (MSM). An ongoing French study has seen no new HIV infections among high-risk participants who opted either for on-demand PrEP, in which doses are taken only shortly before and after intercourse, or daily Truvada as prevention.

The study authors found that those who chose daily PrEP tended to have more sexual partners and more frequent sex than those who opted for the on-demand strategy. There was also a trend toward increased sexual risk-taking over time among the participants. Given how highly effective Truvada is at preventing HIV acquisition, the word risk in this context largely applies to other sexually transmitted infections (STIs), including the bacterial infections gonorrhea, chlamydia and syphilis as well as hepatitis C virus (HCV). 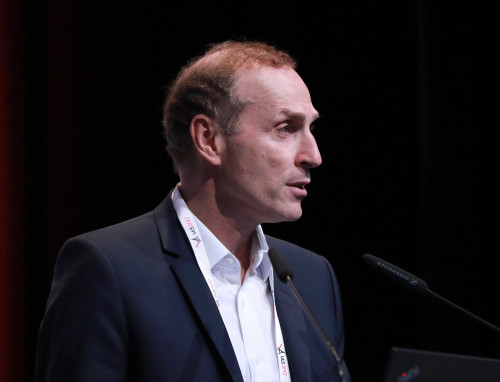 Molina was also the head of the previous IPERGAY study of MSM at high risk for HIV that found that on-demand PrEP reduced the risk of HIV by 86 percent compared with a placebo. Then, during the study’s open-label phase, when all participants knew they were receiving Truvada and not a placebo, Molina and his colleagues found that the dosing strategy reduced the risk of HIV by an estimated 97 percent compared with the infection rate seen in the previous placebo group. This follow-up study also found that on-demand PrEP was highly effective among those having sex relatively infrequently.

The purpose of the Prévenir study is to determine the public health impact of both daily and on-demand PrEP by providing Truvada as prevention in a real-world setting.

On May 3, 2017, the study began enrolling HIV-negative adults at high risk for HIV; all must report inconsistent condom use. All participants must also start the study with a creatinine clearance of 50 or above, indicating good kidney function. Those who choose the on-demand dosing strategy must test negative for hepatitis B virus (HBV).

Participants are given a choice of daily or on-demand PrEP and are examined every three months and given an HIV test and, at their physician’s discretion, STI tests. The study members also receive condoms and lube and risk reduction and adherence counseling. Additionally, they respond to questionnaires about their sexual behavior.

The Prévenir authors plan to enroll 3,000 participants, 85 percent of them MSM. By May 31, 2020, they hope to be able to show a 15 percent drop in the annual HIV diagnosis rate among MSM in the Paris region compared with the 2016 rate.

By comparison, a recent study conducted among high-risk MSM in New South Wales, Australia, rapidly scaled up daily PrEP use among several thousand men. Compared with the statewide HIV diagnosis rate among MSM during the 12-month period prior to the scale-up (the study took eight months to reach the initial target of 3,700 participants, then continued enrolling participants), the 12-month period afterward saw a 32 percent drop in the rate of diagnoses of recently contracted HIV among MSM and a 25 percent drop in the overall diagnosis rate among this demographic.

A total of 51.7 percent did not have a regular sexual partner, 51.2 percent had a history of PrEP use before entering the study, 40.3 percent reported engaging in what in Western Europe is known as chemsex, specifically sex in the last 12 months involving the use of ecstasy, crack, cocaine, crystal, speed or GHB. At the study’s baseline, the median number of reported condomless sex acts during the previous four weeks was two and the number of reported sexual partners during the previous three months was 10.

These trends were similar whether participants opted for daily PrEP (724 people, or 45.4 percent did so) or on-demand PrEP (870 people, or 54.6 percent did so). However, there were statistically significant differences (meaning these differences were unlikely to have been driven by chance) between the two groups on two measures of sexual risk-taking. At the study’s baseline, those taking daily PrEP reported three condomless sex acts during the previous four weeks while those taking on-demand PrEP reported two. As for the reported number of sexual partners during the previous three months, the daily group reported 15 while the on-demand group reported 10.

The study authors’ current analysis looked at data from five time points. At the study’s baseline, the analysis included 1,594 participants, while month three of the follow-up period included 1,102 people, month six included 704 people, month nine included 412 people and month 12 included 124 people. These effectively declining figures do not reflect a mass exodus from the study over time, rather they indicate a gradual scale-up of participants, with an increasingly smaller proportion having thus far participated for the study at each successive time point.

In fact, for each 100 cumulative years of follow-up, just 3.3 people have dropped out of the study, including 1.5 people who stopped taking PrEP entirely.

Because of the different makeup of participants included in each time point, assessing behavioral trends over time should be conducted with caution. It would be much easier to determine how PrEP may be associated with increased sexual risk-taking, also known as risk compensation, if a high proportion of the participants had already made it through 12 months of follow-up. In the current analysis, the average follow-up time among the participants was just seven months.

The proportions of participants opting for either dosing strategy remained relatively constant at each successive three-month time point.

Compared with the HIV infection rate seen during the placebo phase of the IPERGAY trial—very high at 9.2 infections per cumulative 100 years of follow-up—the Prévenir investigators estimated that this new study has already prevented 85 infections among the participants.

At each successive three-month time point in the study, various measures of sexual risk-taking tended to be greater. The median number of condomless sex acts during the previous four weeks was about three such acts at baseline and six at the 12-month point in the daily group, while the on-demand group reported two and four such acts at these two time points. 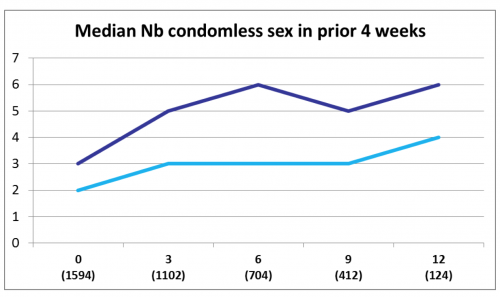 The proportion reporting not using a condom for their last intercourse was about 65 percent in both study groups at baseline and 91 percent and 85 percent among those on daily and on-demand PrEP, respectively, at the 12-month mark. 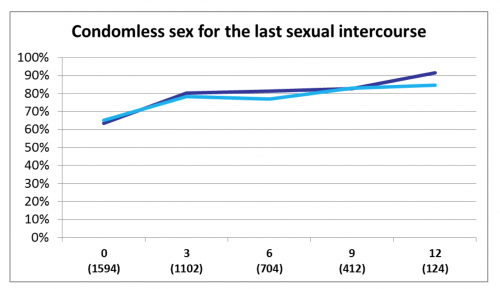 At the study’s outset, the proportion reporting engaging in receptive condomless sex (being the bottom) the last time they had sex was about 39 percent and 42 percent among those taking daily and on-demand PrEP, respectively; these figures were about 54 percent and 50 percent, respectively, at the 12-month point. 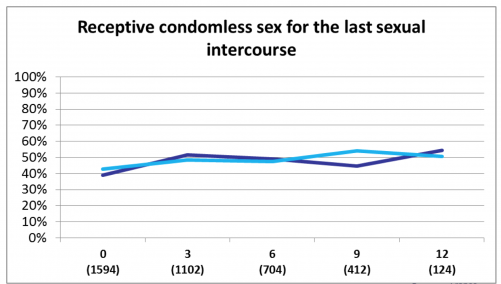 The participants’ reports about their median number of sexual partners during the previous six months followed a variable pattern in the daily group, starting and ending at about 15 partners, while generally declining in the on-demand group, from 10 to seven partners. 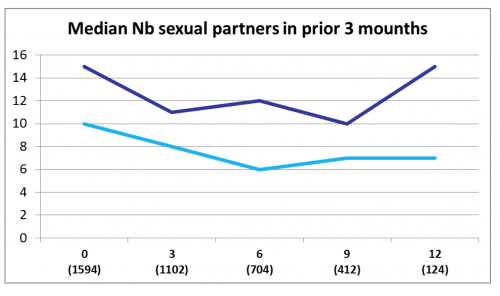 Those taking PrEP daily had a 10 percent lower rate of drug-related adverse health events compared with those taking PrEP on demand. Each study group had a respective 75 and 91 such events, for a respective rate of adverse health events of 115 and 125 per 1,000 cumulative years of follow-up. The majority of these health events were gastrointestinal. Such somatic side effects tend to dissipate within about a month of daily use of Truvada. However, reports have begun to surface indicating that those who take Truvada intermittently may not benefit as much from this phenomenon of lessening side effects.

Those taking PrEP daily also had a 20 percent lower rate of grade 3 or 4 adverse health events, with a respective 24 and 26 such events among each study group, for a rate per 1,000 cumulative years of follow-up of 36.1 and 47.4 such events.

None of the participants have discontinued PrEP because of a drug-related side effect.