The use of Truvada (tenofovir disoproxil fumarate/emtricitabine) as pre-exposure prophylaxis (PrEP) soared in New York City, charting a 10-fold increase between 2014 and 2016. However, following national trends, troubling disparities persist, with Black male patients of medical practices less likely than their white counterparts to receive Truvada (tenofovir disoproxil fumarate/emtricitabine) for prevention.

New York City recorded 2,483 new diagnoses in 2015. Fifty-eight percent of those were among men who have sex with men (MSM), 16 percent were among Black and Latina women and 53 percent were among individuals who live in neighborhoods with high levels of poverty.

New York has been at the vanguard of promoting PrEP over the past few years. In 2014, the New York City Department of Health and Mental Hygiene instigated a campaign to provide PrEP-related resources to primary care and infectious diseases (ID) practices. All told, health department staff visited more than 2,500 health care providers at more than 1,000 clinics. Additionally, the health department has run major advertising campaigns to help educate the public about Truvada as prevention and to seek HIV testing. Other organizations in the city have run their own PrEP promotional campaigns as well.

Investigators at the department of health analyzed electronic health records from 602 medical practices in the five New York City boroughs, looking at changes in PrEP prescription rates each quarter from the first quarter of 2014 to the second quarter of 2016. Findings were presented at the IDWeek 2017 conference in San Diego.

Because this analysis looked only at PrEP prescription rates as a proportion of all patients seen at medical practices, they are not necessarily a true reflection of Truvada as prevention’s use among all New York City residents. But by looking at the changing rates of PrEP prescriptions written by a stable set of medical practices over time, the report provides important information about PrEP use trends and disparities. 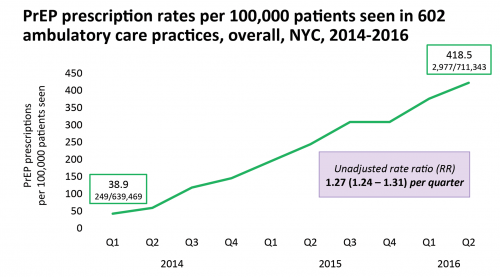 Men, who started off more likely to receive PrEP than women at the beginning of the study period, became even more so likely to get a Truvada-as-prevention prescription as time passed, and by mid-2016, 95 percent of the PrEP prescriptions were written for men. The vast majority of these men were likely MSM. In the first quarter of 2014, men and women received a respective 220 and 29 prescriptions, for respective rates of 90 and 7 per 100,000. After adjusting the data to account for various factors, the investigators found that at that time, men were 4.6 times more likely than women to receive PrEP, a ratio that increased to 13.5 by the second quarter of 2016. At that point, men and women received a respective 2,835 and 142 PrEP prescriptions, for respective rates of 1,036 and 32 per 100,000.

While more people age 30 and older received PrEP prescriptions, the prescription rate per 100,000 patients in the younger age group was much higher. By the mid-2016, 974 people in the younger age bracket received PrEP, for a rate of 2,297 per 100,000 patients in that age group, while 1,861 people in the older age group received a prescription, for a rate of 805. After adjusting the data for various factors, the researchers found that 18- to 29-year-old patients seen at these practices were 2.8 times more likely to receive PrEP than patients 30 and older.

The data also indicated that when a lower proportion of a medical practice’s patient population was from high-poverty neighborhoods, that practice was more likely to prescribe PrEP. However, this disparity narrowed during the study period.

“These results show that educating health care providers can really help improve the rate of PrEP prescribing,” Paul Salcuni, MPH, lead author of the study and lead data analyst for prevention at the Bureau of HIV/AIDS Prevention and Control at the New York City Department of Health and Mental Hygiene, said in a press release, “but it’s apparent we need additional programs to ensure equitable access.”

The health department has new PrEP promotional campaigns in the work, including one that will target health care providers servicing women.