A new documentary explores the role of women in the HIV/AIDS pandemic. 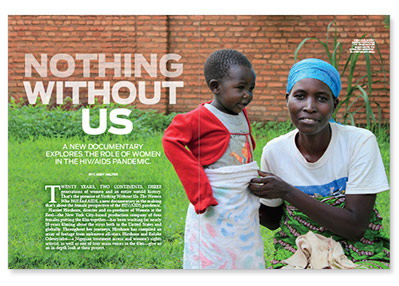 Twenty years, two continents, three generations of women and an entire untold history. That’s the premise of Nothing Without Us: The Women Who Will End AIDS, a new documentary in the making that’s about the female perspective of the HIV/AIDS pandemic.

Harriet Hirshorn, director and co-producer of Women at the Reel—the New York City–based production company of four females putting the film together—has been working for nearly 10 years filming about the virus both in the United States and globally. Throughout her journeys, Hirshorn has compiled an array of footage from unknown all-stars. Hirshorn and Rolake Odetoyinbo—a Nigerian treatment access and women’s rights activist, as well as one of four main voices in the film—give us an in-depth look at their project.

“For a few years I kind of tagged along various activist projects and would follow them wherever they went,” says Hirshorn about her start 25 years ago as a feminist HIV/AIDS documentarian. “I would just videotape as research to try learning more myself.”

The producer and filmmaker was one of ACT UP New York’s first female members, originally joining the group in 1989 to help get women living with HIV/AIDS covered under the same disability benefits as men. She then went on to cover women’s and lesbian rights in France. Through the fluidity of her work and the movements, she ended up in Africa during the early 2000s, when the continent’s fight to acquire access to modern antiretroviral treatment had started gearing up.

While shooting in Nigeria back in 2004, Hirshorn crossed paths with Odetoyinbo, an HIV-positive mother. Since her diagnosis, Odetoyinbo has become the national coordinator of Treatment Action Movement (TAM), a coalition of treatment activists in Nigeria, as well as the executive director of Positive Action for Treatment Access (PATA), which provides medications and services to her community.

Odetoyinbo doesn’t take no for an answer, which illustrates just how strong and powerful women’s voices can be to the international movement.

“I don’t know how much of the 10 years of footage of me she will use,” Odetoyinbo says. “She has been with me in Kenya, India, France, the United States and I can’t even remember where else. She’s followed me in Nigeria from Lagos to Abuja, and she was there with her camera when my son was born.”

In fact, Hirshorn originally planned to make a documentary on Odetoyinbo’s inspiring story. “I didn’t want to play into the whole defeatist, ‘We’re losing an entire continent’ sort of thinking. Instead, I wanted to support people who are positive and are actually doing something,” Hirshorn says.

However, when funding fell through, the filmmaker found herself back in the United States seeking a new direction for her work. In the past year, Hirshorn has looked back at her activism and looked ahead at the women who help shape the movement today. Now she has a film spanning continents and highlighting the many different female leaders engaged in the global HIV/AIDS fight.

“There are four very strong lead characters—Odetoyinbo, Gina Brown, Mary Bowman and Jeanne Gapiya,” says Hirshorn. “Then there’s a secondary rung of HIV experts: Naina Khanna, Dazon Dixon Diallo, Pat Knowles and Terry McGovern. These women have been and still are key to ending HIV/AIDS, and I don’t think that any film has shown that so far.”

Hirshorn and her team have combined archival footage from ACT UP, as well as African and U.S. television to supplement her in-person documentation. The film’s focus runs from the late 1980s up to the present day and spotlights Alabama, New Orleans and Baton Rouge, as well as Nigeria and Burundi.

“When we had initially described the project as including the stories of African women and American women, I think people were sort of like, ‘Wow, how are you going to make this geography thing work?’ When we screened our first selects, no one had any questions about that,” she says. “It was really easy to see the commonalities.”

Odetoyinbo agrees. “The drivers of HIV in African-American communities are very similar to what we have in sub-Saharan Africa. The stigma, fear and myths.”

“It’s a corrective lens,” Hirshorn says of the documentary. “We’re trying to restore women to the narrative of the history of AIDS activism. The history is being written now, and women are being written out of it.”

“One main topic that this film will address is that the crisis isn’t over,” Hirshorn says. “More than half of the people living with this illness are women—and women figure very prominently in the response to this disease.”

Odetoyinbo says that this film is different from other recent films about HIV/AIDS because it tells the story of ordinary women without making them larger than life. “It also dares to portray us with our fears, cares and everyday struggles,” she says. “If the women are seen as doing anything extraordinary, that will be a decision the audience will reach independently.”

Currently, Hirshorn and her documentary team are searching for one more character for the film. “We want to include an HIV-positive girl from Kenya, South Africa or Burundi to talk about what it’s like to have been born with HIV,” she says. “They live with the secret and stigma of HIV, but they don’t necessarily live with the health challenges,” especially when compared with the previous generation.

The film also will touch on the health disparities that exist between the continents and contribute to the number of kids born with HIV, despite scientific advancements to prevent it.

“The United States has virtually eliminated parent-to-child transmission because there is national antenatal health coverage,” Odetoyinbo says. “This makes it possible to provide early testing services for all U.S. pregnant women and treat those who are infected. In my country, we are able to reach less than 20 percent of pregnant women with HIV testing. Only 60 percent of women attend antenatal clinics, and less than 40 percent of deliveries are by trained birth attendants.”

Covering all that ground is going to be a long road, Hirshorn says, and the film is not even halfway shot. But by bringing together these voices, she is hoping to create a new tide of change in the movement.

“This is a gender justice film as much as it is an AIDS film,” she says. “It says, If women are not included in the solution, there will be no solution.”

“When you shoot a documentary, there are a lot of surprises,” Hirshorn says. For one thing, there’s the money. “It was really hard to get funding for an ‘upbeat’ film about AIDS in Africa,” she says, adding that such an outlook derailed her earlier film about Odetoyinbo. “It wasn’t the perspective or image that people wanted to see.”

Odetoyinbo agrees, saying the biggest barriers to her HIV/AIDS work in Africa continue to be the “inadequate funding for women’s organizing and women-led organizations,” as well as “too few women at the helm of AIDS programs.”

Hirshorn and her team plan to continue shooting the film through the end of 2014, but they’re not sure whether the funding to complete it will come through. If it does, the film could hit the global festival circuit by next year.

Until then, Hirshorn and Odetoyinbo will continue shooting across the United States and Africa. The director’s ultimate goal when it’s done? “Hopefully, Nothing Without Us will bolster the work of women everywhere still fighting for their communities and their lives.”

Go to womanatthereel.com/the-film to help fund the documentary and to contribute your story.