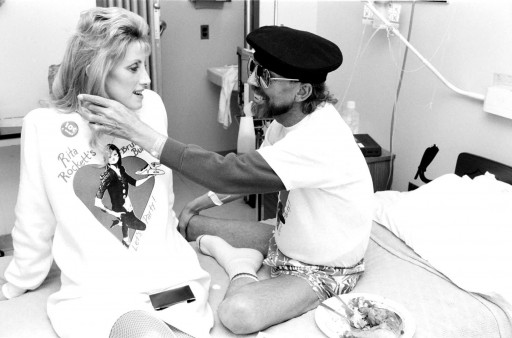 Ward 5B caregiver Rita Rockett visits with a patient. Courtesy of 5B/Ken Kobré

The documentary “5B” profiles the nation’s first hospital ward to care for people with AIDS.

In 1983, a group of pioneering nurses at San Francisco General Hospital opened 5B, the nation’s first ward dedicated to people with AIDS. The nurses—and doctors and activists and other caregivers—of that ward are the subject of a new documentary titled 5B. You can watch the first official trailer below:

Through archival footage and photographs, the film, which opens today, captures not only the paranoia and discrimination that characterized the early epidemic but also the compassion and bravery of those who rose to fight it. In 1983, no one knew precisely how the disease was transmitted—only that it was a death sentence. As a result, many health care workers and hospital staff feared coming in contact with people who had AIDS. Yet a group of nurses under manager Alison Moed set up a ward for people with AIDS, a place where the staff made their own rules that allowed them to offer patients dignity.

Without donning layers of gloves, the nurses touched and hugged their patients. Long before same-sex marriage, nurses allowed the partners of gay patients into their hospital rooms—and their beds too (for cuddling). They even smuggled in their patients’ pets. “People still died,” Moed says in the film, looking back on that era. “But we made a difference in the way they died.”

They made a difference in other ways too. For example, press coverage of Ward 5B showed viewers that it was safe to touch a person with AIDS. Nurses also risked their own lives—one nurse contracted HIV from a needlestick—and they found themselves in public and behind-the-scenes controversies involving the safety of health care workers caring for people with the virus.

As 5B documents, Lorraine Day, MD, a chief of surgery at the hospital, wanted all her patients tested for HIV before she would operate on them. To this day, she defends her behavior, maintaining she was acting in the interest of safety for the health care providers—though her moral judgments about people with HIV complicate otherwise legitimate concerns and go a long way toward painting her as the villain of the movie. 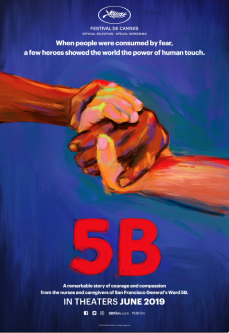 The “5B” movie posterCourtesy of RYOT

The film is codirected by Dan Krauss and Paul Haggis. In an interview with Huffington Post, Krauss talks about the moment, while researching the film, that he realized he had found a story worth telling:

“It was when I was speaking with Cliff Morrison, who founded the ward. He relayed an anecdote that’s in the film about allowing cameras to come in and instructing his staff to be photographed and filmed touching other patients. It was this moment where I realized it was the act of human touch that was an act of radical activism. They were allowing themselves—and, in fact, encouraging themselves—to be filmed touching other patients so that people around the world would see that it was OK, that it was safe, that providing care to AIDS patients was necessary and human.”

The film has also received a boost from actress Halle Berry, who’s an ambassador for the documentary. What is her connection to Ward 5B? As she explained in a Forbes interview:

“[The movie] really, really emotionally touched a chord in me, and I think it’s because I knew someone that suffered this way. My roommate back in the middle-to-late ’80s was diagnosed with AIDS. I watched him suffer and I suffered alongside him, and I think that’s why.

“I cared for him, and I wasn’t someone who was afraid because my mother was a nurse, she was more versed than most about the virus because she was in the medical world. I asked, you know ‘mom, am I okay...?’ and she was the first one to tell me, yes, that is not how you contract AIDS. Living in that house, sharing silverware, cups, plates, loving on that man, being there for him is not how you contract AIDS. My mother told me that so I knew it to be true, she wouldn’t put me in harm’s way, so I was able to be there for him. To see these patients in this film, what they went through, and to see them be hugged by these relative strangers (to start) who became their family, that’s how I felt about my friend Willy. I became his family, and you become a family really quickly when you’re facing adversity in a crisis like this and something is life-or-death. The days are numbered, and you just want to get as close to someone as you possibly can because you know in a minute the they’re not going to be here.”

In the same Forbes article, Morrison relays why it’s so important to tell the story of 5B today, when we know so much more about the virus and how it is and is not spread and when an HIV diagnosis no longer need be a death sentence. He says:

“It’s been 35-plus years, but these are still issues that we’re dealing with every day. We’re still dealing with inequality, still dealing with discrimination, bigotry and hatred, separation and division, and I think all those things become so clear when you see this beautiful thing that was created out of this [situation].... The fact that this film happened at this time says a lot, and I really hope that message gets out.”

You can learn more about the movie at 5BFilm.com, including where it is playing and how you can organize a screening.