Two of a Kind

Octavia Lewis and Shawn Lopez show us that love can conquer all. 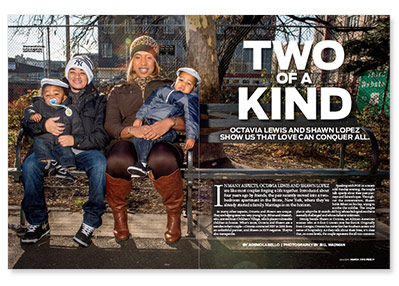 
In many aspects, Octavia Lewis and Shawn Lopez are like most couples forging a life together. Introduced about four years ago by friends, the pair recently moved into a two-bedroom apartment in the Bronx, New York, where they’ve already started a family. Marriage is on the horizon.

In many other aspects, Octavia and Shawn are unique. They are helping raise two very young boys, Ethan and Messiah, who arrived from Children’s Village, which places vulnerable children in homes. What’s more, Octavia and Shawn are a serodiscordant couple—Octavia contracted HIV in 2006 from an unfaithful partner, and Shawn is HIV negative. They’re also transgender.

Speaking with POZ on a recent cold Sunday evening, the couple talk openly about their past journeys and future hopes. Throughout the conversation, Shawn holds Ethan on his lap, trying to soothe the toddler. The couple plan to adopt the 18-month-old boy, whose biological mother is mentally challenged and whose father is unknown.

Sitting beside Shawn is Octavia, an African-American woman who at 6-foot-1 towers over her fiancé. Originally from Georgia, Octavia has never lost her Southern accent and sense of hospitality. As they talk about their lives, it’s clear that, on some levels, the couple represent the all-too-common ways that HIV often intersects the lives of transgender people, while at the same time, their story sounds like the only one of its kind you could ever encounter.

It is no secret that transgender women (that is, male-to-female transgender people) are at high risk for HIV. In fact, the prevalence of HIV is higher among this population than other high-risk groups, including men who have sex with men (MSM), injection drug users and sex workers. A meta-analysis published in the Lancet Infectious Diseases journal found that, worldwide, nearly one in five transgender women are living with HIV. In the United States, that number is slightly elevated: 21.6 percent. But data from the Centers for Disease Control and Prevention (CDC) put this statistic as high as 27.7 percent.

Why is HIV so prominent among this population? Jennifer M. Barge, director and founder of TransHealth Coordinators, a group that offers education to medical practitioners while also helping the trans community attain better health care options, offers some insight. “The alienation from family and friends leaves us feeling unloved,” Barge says. “Add rejection and even abuse from partners, and you end up with a vulnerable person who just wants to make their life work.” Another reason, she says, is that “culturally, if you want to be ‘the woman’ then you need to be subservient to ‘the man,’ and if he does not want to wear a condom, then no protection is used.”

Other factors are well documented to be more prevalent among the transgender population and to increase their risk of acquiring HIV. An issue brief on the topic published by amfAR, the Foundation for AIDS Research, includes these factors: low self-esteem and body issues; sexual risk behaviors (such as the unprotected receptive sex Barge mentions); injection drug use, including hormones and injecting silicone; the presence of sexually transmitted infections; inadequate access to good health care; violence; and sex work.

Octavia laments that so many women of trans experience turn to sex work. She explains that because they don’t have equal employment opportunities, it’s often one of the only ways they can pay for food, rent or surgeries. “I used to do commercialized sex,” Octavia acknowledges. “It’s not something I’m proud of. I did it because I had to pay my way to school.” She earned her master’s degree from DeVry University and is working on her doctorate at Capella University.

Speaking honestly, even about topics such as sex work, is part of what Octavia does as an advocate and educator. As a member of Trans Women of Color, she has spoken about HIV/AIDS issues for events at the Apollo Theater and at New York University. “I educate those who want to be allies,” she says, noting that she uses every platform available to get her messages across—and that includes being an active parent in her community.

Before transitioning, Octavia lived as a gay man and dressed in drag. It was during this phase of her life that she contracted HIV in 2006 through her gay partner. When her HIV test came back positive, she went into a depression—she had watched two friends die of AIDS-related illness—and she even thought of suicide. Luckily she met mentors and had family members who helped her out of the darkness; they also inspired her to start living as Octavia. In 2011, she relocated to New York City and rebooted her life, committed to giving back to others in need. Today, Octavia, who turned 34 this February, works full time as an educational specialist in transgender programming at Hetrick-Martin Institute, helping LGBT youth prepare for college.

Her friends say Octavia’s boundless optimism plays a big part in her success. “Octavia is a person that always believes God or the universe will find a way for things to work out for her,” says Kim Watson, a family friend and co-founder of the transgender group Community Kinship Life (CK Life). “That mind-set won’t allow her to stay down, even when life hits her with something like HIV.”

Watson describes Shawn in similar terms: “They are both stubborn, but in a good way. They’re a unique couple because they do what makes them happy and not what others expect them to do.” 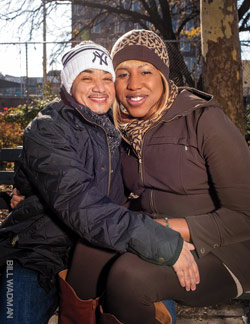 Shawn, 47, a native New Yorker, had his first trans-related surgery in 2011. Octavia has also undergone surgeries as part of her journey. Despite the life-altering importance of these procedures, in 42 states health insurance companies can legally discriminate against transgender people. Such a lack of equality and a dearth of health care workers educated about trans issues are yet other factors that put transgender people at risk for HIV.

In general, though, health surveys fail to take into account gender-variance factors, which makes collecting data on the transgender population that much more difficult. This problem was illustrated in fabulous and personal detail at the most recent United States Conference on AIDS, where Orange Is the New Black transgender star Laverne Cox recounted her own experiences while taking part in a recurring HIV study in New York City.

On the survey, she had to be categorized as a man who has sex with men (MSM) because its parameters didn’t allow her to identify as a transgender woman. “Trans folks are not going to go into a study that disavows and erases their identity,” she told the audience. “We need more studies to acknowledge who we are. That is so fundamentally important.”

The good news, wrote Jason Cianciotto and Marcel Byrd of GMHC in a recent POZ opinion piece, is that the United States is equipped to include transgender people in HIV care and research. A number of long-established organizations are currently providing treatment and care for people living with HIV. “The infrastructure already exists that can support transgender-specific initiatives,” they write. “We need these agencies to prioritize prevention and treatment for transgender people and the funding to make it happen.”

Of course, Shawn and Octavia don’t define themselves or their relationship in terms of statistics and research. To Shawn, he and his fiancée are just “two kind, loving people.” Currently they have a domestic partnership, but they do plan to get married once they’ve completed all their surgeries. In the more immediate future, they’re looking forward to warmer-weather activities—going to the movies, restaurants and beaches—and of course lots of time with family.

Shawn, a proud stay-at-home dad, is focused on raising Ethan and Messiah, no easy task since Ethan is developmentally behind other 18-month-olds and requires therapy twice a week. Shawn would love for his family to own a home someday—and to adopt another child. “My dream,” he says, “is to continue being a father and see that my children’s dreams come true.”

Such aspirations might seem commonplace, even mundane, among most couples; for Octavia and Shawn, though, such dreams are also unique.