Detail from the PrEP Fair flyer Courtesy of ASP Cares

Stop by during the Oklahoma City Pride Festival on June 22 for an HIV Test, a visit with a doc and a script for PrEP.

Folks at the Oklahoma City Pride Festival have another reason to be proud this year: the launch of PrEP Fest. On Saturday, June 22, people are invited to stop by and get tested for HIV and sexually transmitted infections (STIs), to visit with a medical provider and to pick up a prescription for PrEP—all for free.

PrEP refers to the daily tablet Truvada as pre-exposure prophylaxis, which HIV-negative people take to keep from contracting the virus.

Promoting PrEP in Oklahoma is especially important because the Department of Health and Human Services considers the state one of seven rural states with the highest HIV rates. In 2017, as a PrEP Fest press release notes, 300 people tested HIV positive in the state, adding to the 6,000 already living with HIV in Oklahoma. 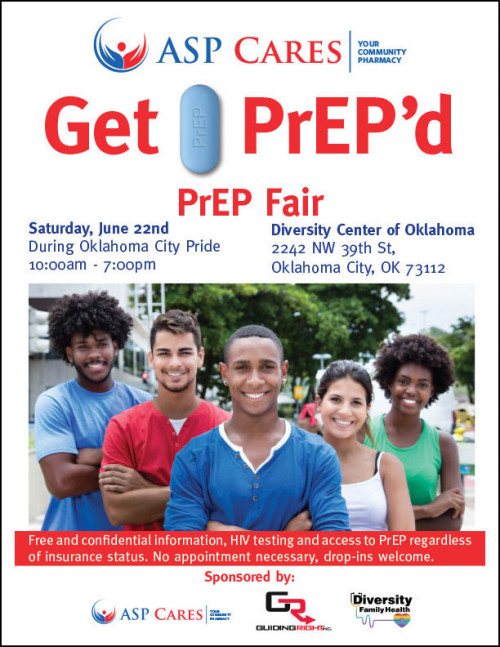 “This is the very first time PrEP sreenings and access will be available during Pride,” Cher Golding, the community liaison for ASP Cares, told Gayly.com. “Representatives from Gilead [Sciences, which manufactures Truvada], ASP Cares, Walgreens and other providers will also be on hand to connect attendees with resources and answer their questions about PrEP.”

Gayly reports that the testing events take place from 10 a.m. to 6 p.m., Saturday, June 22, at both the Diversity Center of Oklahoma Community Resource Center and at the Expressions Community Center.

Scientists estimate that when Truvada is taken daily it reduces the risk of contracting HIV by 99% or more among men who have sex with men (MSM) and 90% or more among women. (The risk reduction for women may very well be greater than 90%, but currently available research is insufficient to refine the estimate.)

Although the cost of a monthly supply of Truvada can exceed $1,600, most health insurance plans now cover the med and Gilead offers co-pay cards. In fact, many people now receive the prescription for free.

In related news, the head of the Centers for Disease Control and Prevention, Robert Redfield, MD, stopped by Oklahoma City earlier this year to talk about the epidemic and President Trump’s plan to end HIV in the United States. As News 9 reported (see the video above), that plan calls for $291 million to be invested in 48 counties and seven states facing escalating HIV rates.

For background, read “What Do We Know About Trump’s HIV Plan for America?” and click on #Donald Trump and #PrEP.