The study of mixed-HIV-status gay couples prompted the CDC to conclude that undetectable people have effectively no risk of passing on HIV.

The Lancet has published the study that, paired with a previous, similar study, led the Centers for Disease Control and Prevention (CDC) to conclude in 2017 that people with HIV who have an undetectable viral load have effectively no risk of transmitting the virus. Called Opposites Attract, this observational cohort study of mixed-HIV-status gay male couples was first presented to great fanfare at the 9th International AIDS Society Conference on HIV Science in Paris (IAS 2017) in July 2017.

In Opposites Attract, the participants contracted sexually transmitted infections (STIs) at a high rate and yet still did not transmit HIV among them. This fact helps challenge the presumption that contracting STIs may raise the risk of HIV transmission even when the partner with the virus has a fully suppressed viral load according to his most recent test.

The study authors still recommend that mixed-HIV-status gay couples use condoms or Truvada (tenofovir disoproxil fumarate/emtricitabine) as pre-exposure prophylaxis (PrEP) during the first six months that the partner with HIV is on treatment for the virus, until tests make certain that he has a fully suppressed viral load.

If HIV-negative partners contracted the virus, the researchers conducted genetic testing to determine whether their virus matched their partner’s virus, thus suggesting that the virus transmitted between them.

Both the HIV-positive and HIV-negative men had an average age of 34. At their initial study visit, 13 percent of the HIV-positive partners had an STI and 80 percent were taking antiretroviral (ARV) treatment. Of the HIV-treated group, 88 percent reported taking more than 90 percent of their ARV doses during the previous three months; 78 percent had a fully suppressed viral load. Of the HIV-negative partners, 8 percent reported recent PrEP use and 11 percent had an STI.

In 2016, the PARTNER study also reported no linked HIV infections between mixed-HIV-status gay couples, who were followed for a cumulative 415 years during which they reported condomless sex among them, the HIV-positive men were virally suppressed and the HIV-negative men were not on PrEP. The authors of that study estimated that the true risk of infection was between zero and 0.89 infections per 100 years of sex between such couples.

The Opposites Attract study authors wrote, “This study provides evidence that HIV transmission in the context of viral suppression is very low, although we cannot exclude higher levels of risk based on the upper [confidence interval] limit.” They stressed that between PARTNER and Opposites Attract, there have been no linked transmissions of HIV despite nearly 35,000 acts of condomless sex between the gay couples.

Andrew Grulich, head of the Kirby Institute at UNSW Sydney’s HIV Epidemiology and Prevention Program and chief investigator on the study, was much more emphatic in a press release, stating, “These results form a significant part of the evidence base for the international community-led Undetectable=Untransmissible, or U=U campaign, which highlights the fact that people living with HIV can now live long and healthy lives, with effectively zero chance of sexually transmitting the virus to others, provided their viral load is undetectable due to effective ART." 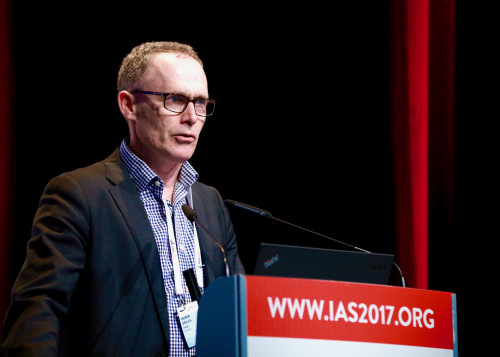 Andrew Grulich, PhD, an HIV epidemiologist at the Kirby Institute at UNSW Sydney in Australia at IAS 2017Benjamin Ryan

While the 2011 HPTN 052 study of mixed-HIV-status heterosexual couples saw four genetically matched transmissions within the couples during the first six months that the respective HIV-positive partners were on ARVs, Opposites Attract did not observe this phenomenon. Given the relatively small data set on hand in the latter study when it came to calculating the risk of transmission during this first six-month period of HIV treatment, the study authors stated that “the most appropriate policy and community education response might be to suggest use of condoms or PrEP in the first six months [of ARV treatment for the HIV-positive partner in a mixed-HV-status couple] and until viral suppression is certain. After this period, viral suppression alone is likely to be sufficient [to prevent HIV transmission].

The researchers calculated that when the partners used one or more HIV risk reduction strategy—condoms, PrEP or viral suppression—the true risk of transmission between them was between zero and 0.63 transmissions per 100 cumulative years of follow-up. That calculation was based on the 582.5 cumulative years of follow-up during which one or more of these strategies were in place among the couples.