The July conference will highlight San Francisco’s successes as well as persistent challenges in Oakland.

Local organizers and elected officials kicked off registration for the 23rd International AIDS Conference (AIDS 2020) at a September 30 media event in San Francisco, highlighting the theme of resilience that has shaped the Bay Area’s response to the HIV epidemic. 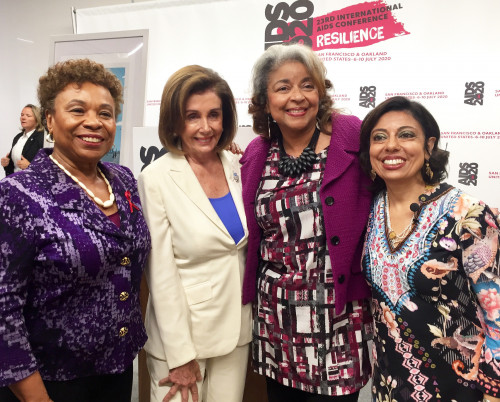 The conference, which will take place July 7 through 10 in San Francisco and Oakland, is the first to be jointly hosted by two cities. That decision by the International AIDS Society (IAS) is meant to highlight San Francisco’s pioneering response to the epidemic as well as the disparities that persist in the Bay Area, the nation and worldwide.

“This conference is going to shed an incredible light on our cities, but it’s also going to shed light on the fact that we still have work to do,” San Francisco Mayor London Breed said at the event.

More than 20,000 participants from over 170 countries are expected, including researchers, health care providers, members of community-based organizations, media, activists and people living with HIV. Registration opened October 1, and application for scholarship will open November 1.

“Strong partnerships are our greatest tool in ending the epidemic,” said Oakland cochair Cynthia Carey-Grant, former executive director of Women Organized to Respond to Life-Threatening Diseases. “While research institutions produce unparalleled scientific advancements, civil society and activists—especially those people living with HIV and AIDS—make sure it is implemented through a human rights and social justice framework.”

The International AIDS Conference was last held in San Francisco in 1990, when the death toll from the epidemic was nearing its peak and effective treatments was not yet on the horizon. After that meeting, the conference was not held in the United States for more than a decade because of a ban that kept HIV-positive people from entering the country. President Barack Obama lifted the ban in 2010, paving the way for AIDS 2012 in Washington, DC.

Several speakers at this week’s media event recalled the atmosphere surrounding the 1990 conference. The sole approved HIV drug, AZT (zidovudine or Retrovir), had been shown to be ineffective when used alone. Stigma and discrimination against people living with HIV were rampant. President George H.W. Bush, like Ronald Reagan before him and all but a few members of Congress, seemed determined to ignore the epidemic.

Charging that governments, the medical establishment, the pharmaceutical industry, the media and the public at large were not doing enough to fight AIDS, activists held daily protests during the week of the conference, with actions both on the streets and inside the conference venue.

“I was at that conference 30 years ago,” Pelosi said. “It was a time of tremendous grief. People were so angry—we were losing our friends, some of us were going to two funerals a day. Yet in the White House, there was not a commensurate recognition of what was happening. When Dr. [Louis] Sullivan, the Secretary of Health and Human Services, got up to talk about what he hoped the administration would do, people were throwing bagels and doughnuts at him while he spoke. It was a horrible experience at that conference. But this one will be completely different because it will have hope.”

San Francisco has played a leading role in bringing about that hope for ending the epidemic, from its community-based care model in the 1980s, to being the first city to promote universal early HIV treatment in 2010, to being on the forefront of same-day treatment and widespread PrEP use today. The city’s recently released annual epidemiology report shows that new HIV diagnoses have fallen below 200 for the first time.

But at the same time, the Bay Area sees some of the same disparities as the United States as a whole. African-Americans and Latinos in San Francisco continue to have higher rates of new HIV diagnoses. Black people also have poorer access to care, a lower rate of viral suppression and higher mortality. Oakland, which has a much larger Black population, has fewer and less well-funded HIV prevention and care services. Outcomes are particularly dismal among people experiencing homelessness.

“The impact that social and economic disparities have on HIV and AIDS is a major focus of the conference,” Carey-Grant said. “Whether it is San Francisco and Oakland or the Global North and Global South, the one thing that resonates around the world is the need to combine experiences and best practices for eliminating disparities in the prevention and treatment of HIV and AIDS.”

Organizers say they are making a concerted effort to ensure broad and diverse participation in the conference, including increasing scholarships to enable more people with HIV, low-income people and young people to attend.

“It can’t be said enough that the teams behind AIDS 2020 are unequivocally united in our commitment to champion the needs of those historically silenced and ignored and to underscore how the face of HIV is changing,” said San Francisco co-chair Monica Gandhi, MD, associate chief of the Division of HIV, Infectious Diseases and Global Medicine at the University of California San Francisco and Zuckerberg San Francisco General Hospital.

But the HIV community is far from united in support of AIDS 2020. Since the dual location was announced last year, some local and international advocates have expressed opposition to holding the meeting anywhere in the United States and in San Francisco in particular.

At the national level, advocates cite a political climate that is increasingly hostile to immigrants, Black and Latino people, LGBT people and other groups that bear the brunt of the epidemic—one that is expected to worsen in the run-up to the 2020 election. Although the HIV travel ban was lifted, other laws still bar the entry of sex workers and people who use drugs. Furthermore, hosting the conference will divert resources that could be put to better use providing direct services for people living with or at risk for HIV, they argue.

With regard to San Francisco itself, conference opponents point to the logistical challenges of housing a large number of people in such an expensive city and moving them back and forth across the bay. Organizers say they want to avoid a situation where major scientific sessions are held in San Francisco while community events take place in Oakland, but so far they have offered few details about how this will be accomplished.

What’s more, the region’s booming tech industry has contributed to rapid gentrification and a growing crisis of displacement and homelessness on both sides of the bay that makes life increasingly difficult for the people most heavily affected by HIV.

After several months of appeals and protests that did not change the IAS decision, a coalition of advocates, community organizations and people living with HIV announced that they will host their own simultaneous event in Mexico City—dubbed HIV2020—“to provide a safe alternative for individuals who cannot or will not enter the U.S. in 2020 or who cannot afford to attend AIDS2020.”

Click here for more information and to register for AIDS 2020.