All in the Familia

Bienestar marks 25 years of serving the HIV/AIDS and other health needs of Latinos in Southern California.

Launched in 1989, the group specializes in education and awareness on HIV/AIDS, substance abuse and drug prevention among LGBT Latinos. The programs at Bienestar are based on a culturally relevant peer-to-peer model, which includes fostering a sense of “familia” (family).

In addition to his work at Bienestar (which means “well-being” in Spanish), De La O is a member of the board of directors of the National Minority AIDS Council. He also dedicates his time to an organization started by his mother called the Children’s Leukemia Society of Ensenada in Mexico.

For more than three decades, De La O has been a voice for Latinos affected by HIV/AIDS. His advocacy on behalf of all Latinos spans over four decades. Here, he reflects on his experiences as an advocate and his hopes for the future.

How did Bienestar come about?
I was president of Gay and Lesbian Latinos Unidos (GLLU) at the time. It was 1984. We started to see our membership dwindling and began to learn the impact of HIV in our community. But of course, no one was talking about it.

Then around ’88 we decided to formalize the Latino AIDS Project within GLLU and we received a grant. We opened a meeting room and hired our first person part time, not realizing the grant wouldn’t start until four months later.

So my sister made a $5,000 contribution, and that’s how we were able to keep the organization up and running. In ’92, we incorporated Bienestar as a separate entity, but we have always identified our starting point as ’89.

I joined Bienestar full time in 1994. Prior to that, I had a full-time job working in an accounting office. I would get out of that job in the afternoon and be at Bienestar until around 10 p.m. I would facilitate groups and workshops, provide information and do some administrative work.

For more than a decade, we were operating from a crisis mentality. We were not only dealing with the individuals that were infected, but we were also dealing with family members feeling guilty. We made many of those people volunteers and agents of change for us.

How is the organization marking its quarter century?
We were originally going to have one event to mark our 25 years. But through feedback from the community, as well as our board and staff, we decided to do a whole year of celebrations at our different centers.

Because of who we serve and having nine locations, if we did only one event we would most likely be excluding people from being part of the celebration. Maybe they couldn’t afford to attend or couldn’t conveniently travel.

We have been commemorating all year. We have done community picnics, and the board has had a couple of events for our key donors. We also are planning to recognize the anniversary at our annual World AIDS Day event.

How have your programs and services changed over the past two decades?
In the last five years, we have moved more to being a behavioral health organization, where we offer mental health services to the entire Latino community, not just to people affected by HIV/AIDS.

We are now doing outpatient substance abuse treatment programs. And we continue to link with health care providers throughout Southern California to provide additional services around health promotion and linkages to care.

The challenge we face is that while resources are in medical settings, clients continue to come to places like Bienestar, where they have built a relationship. It’s not uncommon for people to come from medical appointments to us for clarification. We try to help them, but we don’t have staff dedicated as case managers or treatment educators.

Those of us who work in the AIDS world tend to normalize an HIV-positive result so much that we forget it still has a high emotional effect on many people. Providers used to value that aspect and say people need support groups, mental health services and peer educators.

Now, the attitude often is, “Just link them to care and they’ll be fine.” When I hear that HIV is just a chronic disease like diabetes, it gets me so upset. They don’t know what they’re talking about. Lots of Latinos have diabetes or have family members who have it. The same is true for many African Americans.

Because of their economic circumstances, many of them experience amputations and blindness resulting from diabetes. At best, making this comparison is complicated.

What are some of the challenges the organization faces in serving Latinos?
Let me give you an example. Not too long ago, we had a Latino man who kept reporting he was adhering to his HIV treatment, but his medical case nurse said his test results indicated he wasn’t taking his meds.

I never saw HIV as only a health issue. I also saw it as a social justice issue. I always felt from the beginning that it was stigma, discrimination, poverty and immigration status that were really driving the epidemic among Latinos.

Many Latinos also are late testers, developing AIDS in less than a year after testing HIV positive. It comes down to not wanting to know because of the stigma and the lack of understanding of the benefits of an early diagnosis. We need to help the community build its self-esteem.

What still keeps you motivated after all these years?
My life has been full. I had parents and a sister that loved me and supported me. My mom taught all of us that if you want your life to really have a meaning, then you have to be creating change in other people’s lives.

Unfortunately, I am not at each Bienestar center as much as I would like, but I am at the East Los Angeles center, where my office is located. I may walk to the lobby and see people coming in for the first time. Then I may see them a month or two later and I can see a difference in their faces.

They are no longer feeling that sense of isolation. That is where I get my satisfaction and that feeling of staying committed. I have to continue finding the resources so the people who are part of the Bienestar family continue to create that magic.

I don’t just help individuals. My role in this “familia” is to ensure that the doors remain open. That is my motivation, knowing that the 72 people on staff at Bienestar and the volunteers who give of themselves are making a difference for the community.

There are still so many issues that need to be addressed around social justice, civil rights and economic disparities. Even now, individuals and pharmaceuticals and governments tend to forget that is where the success of eliminating HIV will be. 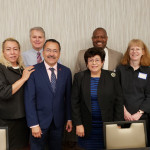