Youth activists living with HIV are speaking truth to power.

In many ways, the feeling of isolation that encapsulates Greenville, Mississippi, reflects the isolation 26-year-old Decorreyon “Corey” Burnside has felt for much of his life as a native of the city.

Greenville is the westernmost stop along the Mississippi Delta on the way to Louisiana. The city was once home to the Natchez people, who were forcibly removed after the United States Congress passed the Indian Removal Act in 1830.

Later, as the slave trade expanded along the Mississippi River, Greenville became a bustling, wealthy hamlet for cotton growers buying and selling the African-American slaves whose descendants account for 75% of the city’s current population.

One can drive down the main thoroughfares for miles without seeing anything or anyone besides open, expansive embankments, hovering elm trees and soybean farms.

Some of the roads remain unpaved and reveal footprints; some are human, but most are from other animals; the only signs of life aside from the vegetation.

Burnside was only 1 year old when he lost his father to sickle cell anemia. As a result, he grew up without many male influences or friends. He was the only boy in a household teeming with sisters, and his relationship with his mother deteriorated after she met a new boyfriend who introduced her to smoking and drinking. As a result, Burnside learned from an early age that he had to do things for himself.

“Growing up, I did whatever I wanted,” says Burnside. “I didn’t have much family to talk to, so there was no one to tell me I couldn’t do something. In the mornings, if my mother hadn’t made breakfast, I would make sure to eat at school. In the evenings, if I came home and there was no dinner, I would microwave whatever was in the house to eat.”

A quiet and lonely student, Burnside didn’t have any friends at school. In fact, he didn’t make his first friends until he was in the ninth grade. Instead of hanging out after school, Burnside would often come home and immediately throw himself into either a good book or his favorite video games.

When things got too bad between him and his mother’s boyfriend, he would walk the 15 miles to his paternal grandmother’s house.

“My grandmother really saved me,” says Burnside. “She was the only person who I felt I could talk to, who would listen and really try to understand me.”

It was this same grandmother who took him to the doctor in October 2013 when he thought he had the flu. As it turned out, he had contracted HIV. He was 19 years old.

When Burnside first spoke with POZ, he was 400 miles from Greenville, in Dallas, attending the Creating Change Conference, one of the largest annual conventions of LGBT people in the United States. It was his first time at the conference, which is sponsored and organized by the National LGBTQ Task Force.

He was there to network with other young leaders and to conduct a breakout session on the qualities of a good leader. “It’s crazy to be presenting at Creating Change,” says Burnside, his anxiety about his impending presentation evident in his voice. “If you would’ve told me in 2013 that I would have been here, I wouldn’t have believed it.”

Today’s young people—from millennials to Generation Z—are the first never to have known a world without HIV and AIDS.

While the overall proportion of young people contracting HIV was down 6% from 2010 to 2016, the reality is that young people are the least likely to know their status, to be linked to care in a timely manner or to have a suppressed viral load.

According to the Centers for Disease Control and Prevention, young people ages 13 to 24 accounted for 21% of new HIV diagnoses in 2017. The majority of those new cases were among young Black and Latino men, 51% and 25%, respectively. Young people now represent a majority of new HIV cases.

Exacerbating matters for young people—particularly in rural areas like Greenville—is the persistence of HIV stigma, both among peers and in the community at large.

A 2019 survey conducted as part of the educational campaign “Owning HIV: Young Adults and the Fight Ahead” found that many millennials and Gen Z-ers are uninformed about the virus and its transmission, even as they engage in sexual behaviors that put them at risk for HIV.

The survey was a joint effort by HIV advocacy group Prevention Access Campaign (PAC) and the pharmaceutical company Merck. PAC launched the “Undetectable Equals Untransmittable” (“U=U”) campaign, which promotes the fact that people with HIV who maintain an undetectable viral load cannot transmit the virus via sex.

In the survey, 28% of millennials not living with HIV say they have avoided hugging, talking or befriending someone who is HIV positive, and 41% of HIV-negative Gen Z respondents say they were either not at all informed or only somewhat informed about HIV. Among HIV-negative millennials, that number falls to 23%.

The survey also showed that many young adults aren’t accurately informed about U=U. Among HIV-positive respondents, only 31% knew that the term “undetectable” also meant that a person living with HIV cannot transmit the virus sexually. Nearly 50% of HIV-negative respondents believed the virus could be transmitted when someone is undetectable.

When asked about these survey results, Burnside didn’t hesitate to blame the limited or nonexistent sexual education in schools. He also pointed to the culture of fear and misinformation in certain communities, something with which Kayla Quimbley agrees.

“The problem in rural areas is misinformation and stigma,” she says. “Where I’m from, everyone knows everyone, and people don’t want to go to the health clinic because people they know from the community work there, review the charts, administer the medicine and tell your business. So people instead sweep things under the rug. Something so prevalent as HIV shouldn’t be taboo.” 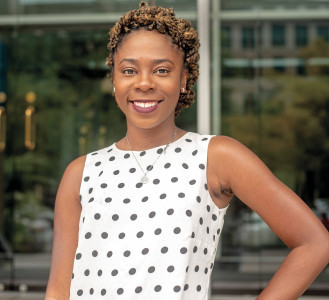 Quimbley understands all too well what it means to be viewed as taboo. She contracted HIV from her mother at birth and found out in the fourth grade that she was living with the virus.

Now 20 years old and a junior at Columbus State University, where she is studying to become a clinical psychologist, the Albany, Georgia, native credits the misinformation about HIV she received from her middle school sex-ed teacher with lighting a fire in her.

“If you’re from a small city, people don’t want to go to the health clinic because they’re scared they will see people from the community,” says Quimbley. “That’s why HIV prevalence is so high. People are having sex and aren’t talking about it. They feel judged, and they’re met with backlash and shame. They don’t speak up, and they don’t get tested.”

It was a poetry slam for young people sponsored by AID Atlanta that helped Quimbley, a writer since age 10, channel her pain and find her voice. As soon as she heard about the nonprofit’s contest and with only one day to turn around a poem, Quimbley, who had participated in talent shows but never a poetry slam, started writing.

“I poured my heart out. I was just writing. Writing about how I felt, what I’d been through and what I knew other people were going through, and the rest is history.”

Voted the best via social media, Quimbley won the contest and was invited to Atlanta to perform at the renowned Fox Theatre. That’s when advocacy became a priority for her. Today, Quimbley is a peer leader and advocate engaging young people in conversations about HIV and safer sex.

Though stigma and discrimination remain key issues in schools, families and communities, both Quimbley and Burnside say young people must also do their part and be held accountable for their actions.

That’s why, in part, Louie Ortiz-Fonseca founded Engaging Communities around HIV Organizing (ECHO), the first national council for youth activists living with HIV who are actively organizing online and in their communities.

“Young people are an amazing untapped community,” says Ortiz-Fonseca. “It’s our responsibility to listen to the recommendations of young people directly impacted by HIV. The goal of ECHO is not to empower young people—they have power—but to put a millennial face to the epidemic. We must end laws and policies that criminalize people living with HIV and make sure every young person living with HIV is cared for and valued.”

Launched in 2018 with just 10 young people, mostly from the U.S. South, ECHO helps young people with HIV transition into adult care, hosts events to destigmatize HIV and advocates for policies and programs that allow this population to thrive. In addition, ECHO works at the community level to combat stigma, providing training and capacity-building resources to providers and agencies working with LGBT young people.

“The biggest misconception is that young people are careless, dumb and don’t know what they are doing or that they need to be ‘empowered,’” says Ortiz-Fonseca. “Young people have power—they just need adults to relinquish the power dynamic and support them in the ways they need and want.”

ECHO also sends students to Washington, DC, for a five-day conference that focuses on issues including HIV criminalization, social media, youth organizing and mobilization. In addition to educating other young people, ECHO is hoping to influence policy.

“The science is real,” says Ortiz-Fonseca. “Laws and policies have to be based on facts and science regardless of political party lines. This protects all young people regardless of sexual orientation, race and gender, whether they are sexually active or not. Policies that criminalize young people’s bodies create an environment where young people are criminalized, particularly those who are Black, brown, queer or trans.”

Burnside credits ECHO and local heroes like his coworker Cedric Sturdevant with encouraging him to become a change agent in Greenville. In 2018, Burnside started volunteering with AIDS Services Coalition (ASC), a local nonprofit that provides services to people living with HIV. He was eventually hired as a program coordinator.

Later this year, Burnside will become the program director for ASC’s new Community Heath Prevention Intervention Education and Research program, also known as ASC-PIER. Although he is proud of what he has achieved—he even plans to return to school to complete his college degree—he recognizes there’s much work to be done.

A recent initiative launched by ASC to recruit young HIV-negative men of color to start taking PrEP didn’t yield the hoped-for results. Of the 44 people recruited, only four agreed to start taking PrEP, and only three actually filled their prescriptions. But Burnside isn’t discouraged. In fact, he’s hopeful that his generation will be the one to end AIDS.

“I really do believe we will end AIDS,” says Burnside, after returning home from Creating Change. When asked how his session at the conference went, Burnside beams, conveying that it went well.

“All my hetero friends have great respect for the LGBTQ family,” he says. “We need to have them push the conversation more so other people will get on board. If you have the right people having the right conversations, we can end stigma and discrimination.”