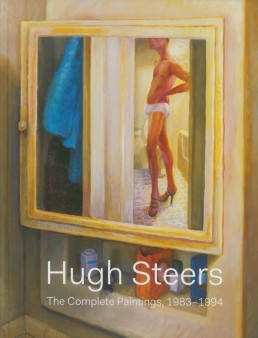 The painter Hugh Steers died of AIDS-related illness at age 32 in 1995, a time when figurative painting like his was not in vogue. Thankfully, Visual AIDS, a nonprofit arts organization, has published Hugh Steers: The Complete Paintings, 1983–1994, the first monograph of the artist. “His work, which was increasingly informed by his own illness, is defined by its subject matter—isolation, the fragility of the body, and intimacy between men,” writes Nelson Santos of Visual AIDS in the preface. The son of a Republican state senator and the nephew of Gore Vidal, Steers graduated from Yale, but, as his friends and colleagues recount in this book, he eschewed the conservative elite, living instead in run-down Manhattan apartments, frequenting East Village nightclubs and devoting energy to his art. Influenced by Edward Hopper, Steers created expressionistic oil paintings in limited palettes, as stripped- down as the people and the rooms—bedrooms and bathrooms, mostly—he depicts. As the novelist Dale Peck notes in the introduction, “The most profound and lasting art often originates in reaction to tragedy, sometimes monumental, sometimes personal.”