Products based on broadly neutralizing antibodies could be used in HIV treatment and prevention.

Scientists within the National Institutes of Health are collaborating with researchers at the nonprofit International AIDS Vaccine Initiative (IAVI) to develop and test combinations of HIV broadly neutralizing antibodies (bNAbs) that could be mass-produced at minimal cost as HIV treatment and prevention. 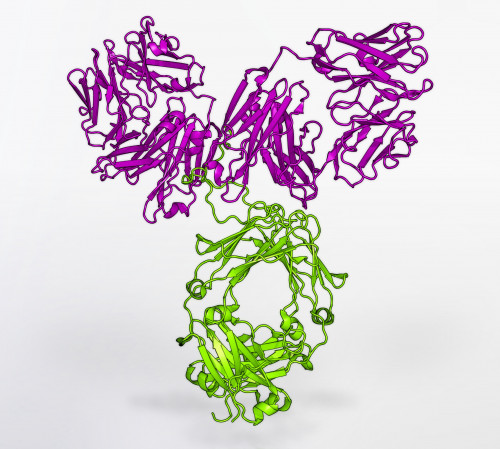 Model of the VRC01 HIV antibodyNIAID

Antibodies are proteins created naturally by the body to fight and neutralize infections, such as those caused by viruses and bacteria. Many people living with HIV naturally produce antibodies to HIV, but this often happens too late to successfully stop or end infection. Several bNAbs have been studied and developed, and a decade ago, NIAID researchers discovered VRC01, an HIV bNAb that is especially promising. Antibodies have been tested in intravenous infusions and have been shown to be safe.

For the new partnerships, NIAID will provide antibodies to IAVI researchers, who will combine and test them. In recent years, scientists have modified VRC01 such that it stays longer in the body.

The hope is that antibodies can be tweaked to last longer in the body and to function both as prevention and long-acting treatment that could suppress the virus—and be produced at a low cost. Researchers also expect to be able to inject the antibodies subcutaneously (under the skin) instead of infusing them.

As POZ previously reported, a pair of studies—HVTN 703/HPTN 081 and HVTN 704/HPTN 085—are testing whether the VRC01 antibody can prevent HIV acquisition. The studies are running in 11 nations in sub-Saharan Africa, South America, Switzerland and the United States. Due to COVID-19, further infusions of the antibody have been halted because previous infusions have been sufficient for researchers, who have continued to follow the participants. For more information on these and other studies, see “How Has the COVID-19 Pandemic Affected HIV Vaccine Trials?”

In related news, leading HIV advocates, including the president of IAVI, recently discussed how lessons from pandemic vaccine development can help fight COVID-19. To read their discussion, see “Partnership Science.”