A stethoscope sits on a stack of insurance forms. Istock

For People With HIV, Health Coverage Is Improving

A new analysis finds that the Affordable Care Act has driven down the proportion of individuals without insurance.

The U.S. health insurance system is a baffling and disconnected hodgepodge of often-out-of-reach resources, the navigating of which can throw practically anyone for a loop, regardless of health status. Now, just as progressive politicians and activists are increasingly demanding a Medicare for All solution, the Kaiser Family Foundation (KFF) has released a healthy crop of new data that provide important insights into how—and whether—those living with HIV are obtaining health coverage.

Overall, the news is good—not that there isn’t considerable room for improvement. The picture KFF draws is of a series of safety nets that either overlap or serve as a backup source of health coverage for the HIV population.

“One of the things that’s really striking is that now the number of people with HIV who are uninsured is much lower than it’s ever been,” says Jennifer Kates, PhD, KFF vice president and director of global health and HIV policy. “It’s on par with the rate in the general population.”

Kates says this decline in the HIV population’s uninsured rate has been driven largely by the 2014 implementation of the major components of the Affordable Care Act (ACA, also known as Obamacare), which was signed into law in 2010—in particular the expansion of Medicaid access.

But thanks to a 2012 Supreme Court ruling that granted individual state governments discretion over whether to expand Medicaid, such improved access has not been uniform across the country. Fourteen states continue to refuse to provide Medicaid to anyone with an income below 138% of the federal poverty level (FPL), as is the ACA-mandated policy in the other states. 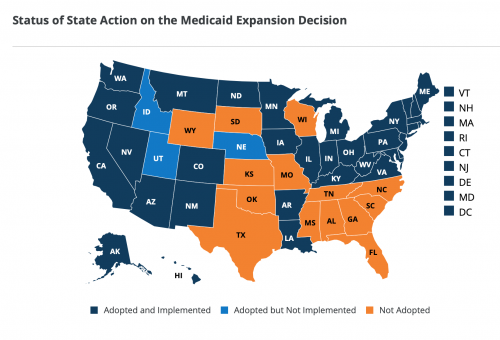 Map of status of state action on the Medicaid expansion decision.Kaiser Family Foundation

In 2019, the FPL for a non-married individual with no dependents is $12,490, which means that 138% of FPL is $17,236. These dollar figures refer to what in tax terms is known as adjusted gross income, which is the figure from the last line of the first page of the old 1040 tax form or line 7 on the new 1040 form that debuted with the 2018 tax year. Adjusted gross income may be much lower than gross income, as it takes into account various adjustments to income (included in Schedule 1 of the new 1040), such as student loan interest, tuition, moving expenses and IRA contributions.

Non-expansion state governments are generally dominated by Republicans and are largely concentrated in the South, where, perhaps not coincidentally, the HIV epidemic is now most severe. KFF’s analysis backs the notion that failure to expand Medicaid is complicating health care access for people with HIV—and likely fueling the spread of the virus, since successfully treating HIV blocks transmission.

Referring to residents of states that haven’t expanded Medicaid and noting the criteria that generally determine access to traditional Medicaid, Kates says, “People with HIV who are low income, not disabled and don’t have kids are just not getting Medicaid coverage.”

The new KFF analysis is based on various sources, including 2015 data about non-elderly (18 to 64 years old) people with HIV from the Centers for Disease Control and Prevention (CDC) Medical Monitoring Project. Information about the general population derived from KFF’s previous analysis of the 2015 American Community Survey. All figures presented in their analysis are estimates.

In 2015, 11% of the HIV-diagnosed population was uninsured, 40% had Medicaid, 7% had Medicare (which like Medicaid is government coverage, but for those age 65 or older and some people with disabilities), 34% had private coverage (25% had employer-sponsored coverage and 6% had ACA marketplace plans) and 8% had some other form of insurance.

By comparison, in the general population, 13% were uninsured, 15% had Medicaid, 2% had Medicare and 68% had private coverage (59% had employer-based coverage and only 5% had marketplace plans), while 2% had some other form of insurance. 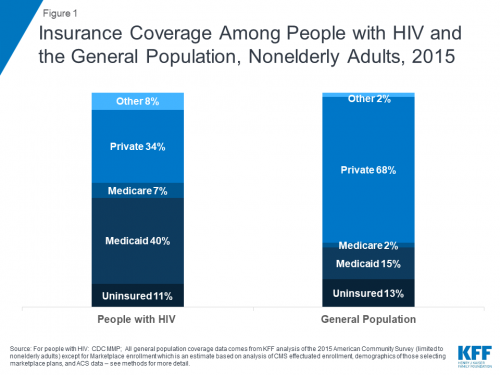 Graph of insurance coverage among people with HIV and the general population, nonelderly adults, in 2015.Kaiser Family Foundation

In a previous analysis, KFF estimated that 18% of non-elderly people diagnosed with HIV were uninsured in 2012, a figure that, following the ACA’s central implementation, fell to 14% in 2014. While those figures are not directly comparable to those included in the new data set, KFF does believe this downward trend continued through 2015. 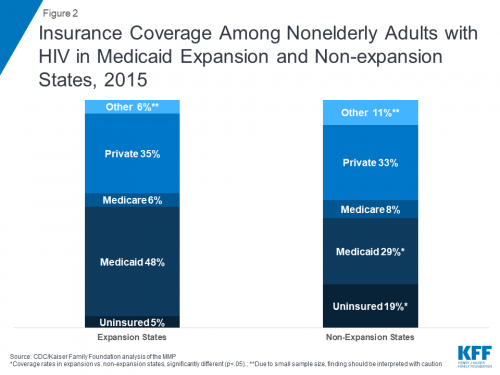 Graph of insurance coverage among nonelderly adults with HIV in Medicaid expansion and non-expansion states in 2015.Kaiser Family Foundation

An additional consequence of the 2012 Supreme Court decision regarding Medicaid has been a persistent dearth of health coverage options for residents unlucky enough to live below the poverty line in non-expansion states. The ACA was designed with the expectation that such low-income individuals would be able to access Medicaid; therefore, by law, the federal subsidies that lower the cost of marketplace plan premiums are available only to those with adjusted gross incomes between 100% and 400% of FPL (the subsidies decrease as income increases).

Thanks to an additional federal safety net for HIV-positive individuals—the Ryan White CARE Act, which was first passed in 1990—many low-income individuals living with the virus in non-expansion states have maintained access to health care. In recent years, the AIDS Drug Assistance Program (ADAP) division of Ryan White has shifted its spending away from paying directly for medications and more toward covering private health insurance premiums and other out-of-pocket care costs. So it is likely that Ryan White is picking up the tab of marketplace plan premiums on behalf of those with incomes below the poverty level in non-expansion states. This phenomenon apparently helps explain why 60% of people with HIV who have marketplace plans receive assistance from Ryan White, compared with only 31% of those with employer-based plans. Overall, Ryan White provides assistance to 41% of insured people with HIV.

The CDC has recently begun to push for a shift away from relying on an HIV-positive individual’s most recent viral load test as an indicator of his or her viral suppression status. A better measure of overall health, the CDC argues, is whether the virus has remained undetectable for the past 12 months. In the 2015 data, KFF found that 70% of individuals with diagnosed HIV had an undetectable virus at their last test, while 62% had a fully suppressed viral load for a year or more. 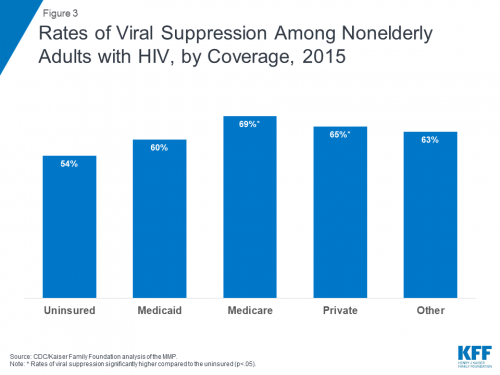 Graph of rates of viral suppression among nonelderly adults with HIV, by coverage, in 2015.Kaiser Family Foundation

“We know that anything that makes access more challenging can have adverse impacts on health,” says Kates. “Particularly for people with HIV.”

In a separate KFF analysis that Kates presented at a recent National Association of State and Territorial AIDS Directors (NASTAD) conference, she and her colleagues tallied the number of states as well as the proportion of the HIV-diagnosed population that benefited from four key measures of insurance access. They found that:

In his State of the Union address earlier in the year, President Donald Trump announced the new federal plan, designed by and run out of the U.S. Department of Health and Human Services, to ramp up the national fight against the HIV epidemic. Many members of the HIV treatment and advocacy community have applauded the plan, including the proposed budget currently winding its way through the approval process, for its bold vision and firm grounding in scientific research on best practices.

That said, members of this community have remained sharply critical of the president for, as they argue, talking out of both sides of his mouth with regard to HIV by calling for improved efforts to combat the epidemic while at the same time maintaining his campaign to hobble and perhaps even totally destroy the ACA—the signature legislative achievement of his predecessor, Barack Obama.

The new KFF report paints in sharp relief just how vital the ACA has become to the overall effort to combat the HIV epidemic in the United States.

“The initiative on its own is an important step forward,” Kates says of the new federal plan to combat HIV. “But to the extent that the larger ACA fabric is reduced or holes are put in it, the initiative is going to be less successful.”