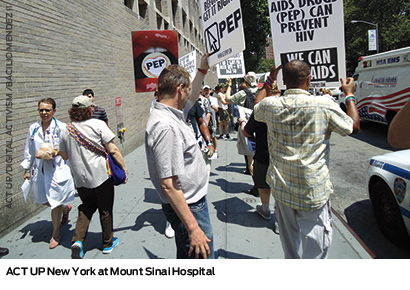 Post-exposure prophylaxis, or PEP, is a way to prevent getting HIV after a possible exposure. It entails taking a regimen of three HIV meds for a month, starting no later than 72 hours after the incident. It’s been standard procedure since 2005, but when a gay man went to the emergency room at New York City’s Mount Sinai Hospital seeking PEP, confusion over its availability ensued. Once activist group ACT UP intervened, the man got the meds. On July 17, ACT UP protested outside the hospital to push the city and state health departments to promote the prevention pill and to ensure that all emergency health providers supply PEP. A similar protest August 15 at the health department also demanded the agency release accurate HIV data.

Pre-exposure prophylaxis, or PrEP
, is when HIV-negative people take Truvada (emtricitabine/tenofovir) daily to prevent getting the virus. The FDA approved Truvada as PrEP last summer, and now a University of California program is awarding $18 million to three teams studying PrEP—along with testing and linkage to care and treatment, or TLC+—in high-risk youths in Los Angeles, Long Beach, San Diego, Oakland and East Bay. Participants receive free meds along with counseling and health services. Meanwhile, the HIV Prevention Trials Network is launching the HPTN 073 study to explore whether black men who have sex with men—a population at high risk of HIV—are willing to use PrEP. The study will span three cities and include 225 men.