How one man became an HIV criminalization advocate.

I first became interested in HIV criminalization laws while attending the 2010 United States Conference on AIDS. I attended a session given by a lawyer from the Center for HIV Law and Policy (CHLP) in New York City.

I was intrigued. I had many questions as to why these laws weren’t being addressed in my state of Ohio. In the deep recesses of my mind, I vaguely remembered a conversation about these laws but never to the magnitude in which they were being addressed in that session. Quite frankly, I didn’t think that folks were actually being prosecuted under these laws.

When I was diagnosed with the virus in the 1980s, it seemed to be a given that people took responsibility for whom they slept with and the part they played in the sexual act, be it from a relationship or a casual hookup. It was considered responsible behavior.

But in that CHLP session in 2010, I had a rude awakening. After the session, I asked for the lawyer’s business card because I had so many questions. After returning home to Ohio, I reached out to more established advocates than myself and others I had met at statewide HIV retreats.

No one seemed to be having any conversation about HIV criminalization laws other than they existed. Surprisingly, or I should say not so surprisingly, many people living with HIV were not even aware of these laws.

From the time I heard about these laws and how people were being prosecuted, I became very scared and guarded about every aspect of my life. I felt like I was living in a war zone and my survival hinged on the fact of how well I could hide my status. I began to have second thoughts on this whole HIV advocacy thing.

I was so torn because I had just become comfortable with being open about my status. Taking back my power now, the very thing that had given me life — my advocacy around HIV — was the same thing that I thought was going to drive me back into hiding. I knew that wasn’t a pleasant place and it was no way to live.

Sadly, I called it my “Anne Frank syndrome.” It’s like I was in hiding just waiting to be discovered. The more I thought about it, I realized that many of us were living and acting as if we were in a secret club. I never quite understood that behavior or even that it existed to such an extent until my eyes were opened at that 2010 CHLP session.

The advocate in me needed answers. What I found the most odd was why no one that I knew of in my state was having any conversations about these laws, at least not public ones that I could listen to and a be a part of. I knew I couldn’t take living in fear, being afraid to go out in public, afraid to socialize with anyone that I had been intimate with.

I began to educate myself on our Ohio law. I learned that it required HIV disclosure even before you kissed someone. This was problematic for me because I always used kissing as a measuring rod to know if a person was right for me, if the kiss felt right. I became alarmed because kissing casually, something I enjoyed, might send me to prison for a long time.

Yes, I clutched my pearls to the point I almost strangled myself with them at the thought. I was driving myself insane. I couldn’t function. I knew something had to be done about this law. I called CHLP and asked them questions about the work they did, as well as follow up questions concerning information discussed in that session.

I learned from that session that CHLP was assisting other states in addressing their laws. They had an initiative called the Positive Justice Project (PJP) and I wanted in. They explained to me that they had limited funding to cover so many states. I kept asking them to come to Ohio. After calling them for several months, I needed to talk with other advocates about mobilizing.

After reaching out to several advocates, many of whom didn’t want to be involved, I managed to get at least three others who were all in and continue to be involved to this date. We started to have our own calls. We struggled for a few years and each month I would continue to call CHLP.

After close to two years of calls, CHLP and PJP finally said OK. I don’t know if it was because of my persistence or just that I was getting on their nerves. Whatever the reason, I was willing to own it. I began to invite people to our calls and engage other stakeholders in the conversation.

The first major successful event was a statewide meeting held in Cleveland. CHLP and PJP attended and the room had over 75 participants from around Ohio. Now several years later we have the wonderful organization titled the Ohio Health Modernization Movement to modernize statewide HIV nondisclosure laws.

Further, I’m proud to say that the upcoming HIV is Not a Crime IV (HINAC4) National Training Academy will take place May 30 to June 2 at Ohio State University in Columbus. I am proof positive (all puns intended) of how one man’s persistence can make a difference. 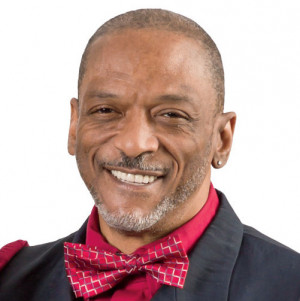 Bryan C. Jones is a founding member of the Ohio Health Modernization Movement.

He is also founder of The Sankofa Initiative, founder of the Dirt Advocacy Movement, a founding steering committee member of U=U and an inaugural U=U ambassador.