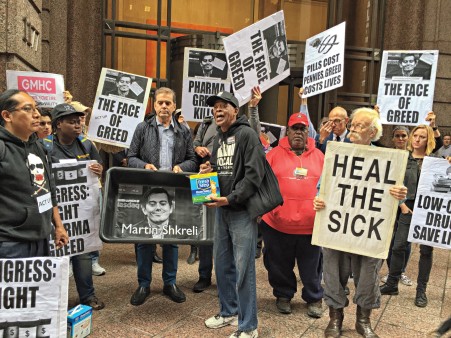 AIDS activists had protested Shkreli after he jacked up the price of a 62-year-old med by 5,000%.

A jury has found “pharma bro” Martin Shkreli, the former pharmaceutical CEO notorious for spiking the price of AIDS-related med Daraprim by 5,000 percent, guilty on three out of eight counts in a federal securities fraud trial, reports The New York Times.

He faces up to 20 years in prison on each of the first two counts and up to five years on the final count. He will be sentenced at a later date.

After the verdict, Shkreli showed no remorse. In a YouTube video he announced, “I’m one of the richest New Yorkers there is, and after today’s outcome, it’s going to stay that way.”

Law professors told Reuters that statements like that could influence the judges not to be lenient when Shkreli is sentenced.

Shkreli first caught the attention—and ire—of the HIV community back in 2015 when his Turing Pharmaceuticals raised the price of the AIDS-related med Daraprim by 5,000 percent overnight, causing activists to protest outside Turing’s headquarters. (Daraprim is a 62-year-old med to treat infections such as toxoplasmosis in people with compromised immune systems, such as newborn infants and people with AIDS. For more in POZ, click here and here.)

Fast-forward to last week when the once-too-confident Shkreli looked shaken as a judge read the verdict. But not long after, he appeared outside of court and said that he was “delighted, in many ways,” with the verdict. “This was a witch hunt of epic proportions, and maybe they found one or two broomsticks,” Shkreli said.

Shkreli spent his five-week trial live streaming and confidently tweeting that he would outwit prosecutors in his federal fraud case.

According to the Times, Shkreli’s lawyers focused on the fact that his investors ultimately made back much more than their initial investments. They said that was proof that Shkreli had never intended to commit fraud. Their explanation was that Shkreli worked hard to get Retrophin off the ground so that he could reimburse MSMB.

However, prosecutors said that paying Shkreli’s old investors was not the responsibility of Retrophin, a public company, and that Shkreli had misled his MSMB investors. As one prosecutor summed up: “Lying to people to get them to invest with you is fraud.”