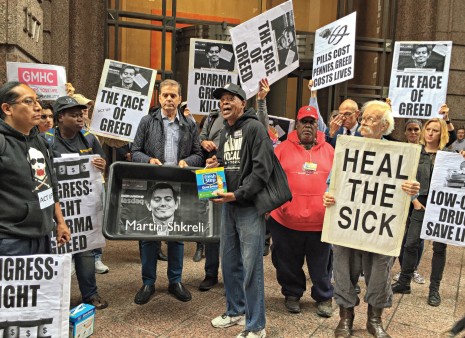 He also jacked up the price of an AIDS-related med 5,000 percent and offered $5K for a lock of Hillary Clinton’s hair.

UPDATE: “Pharma Bro” Martin Shkreli might have just earned a new nickname, something like “the Weeping Con.” Shkreli was sentenced to seven years in prison for securities fraud on Friday, March 9. He cried before the judge as he apologized to investors and acknowledged making past mistakes. Shkreli remains in custody. The Associated Press has a rundown of the trial here.

Remember Martin Shkreli? He’s the former pharmaceutical CEO and hedge funder who became notorious in 2015 for jacking up the price of a 62-year-old medication by 5,000 percent. His reckoning may be at hand.

Shkreli, now 34, was found guilty in August 2017 of three counts of federal securities fraud (for more on that, click here). He is to be sentenced for those crimes this Friday. CNBC reports that prosecutors are seeking a minimum of 15 years in prison while Shkreli’s lawyers are proposing a range between 12 and 18 months.

But a U.S. district judge in Brooklyn recently ordered Shkreli to forfeit $7.36 million as restitution for defrauding investors, Reuters reports.

Among Shkreli’s assets that could be used as repayment are a Picasso painting, a one-of-a-kind recording of a Wu-Tang Clan album, for which he reportedly paid $2 million, plus $5 million in a brokerage account and his stake in Vyera Pharmaceuticals, which he founded.

Vyera used to be named Turing Pharmaceuticals. Shkreli was CEO of Turing when he raised the price of the med Daraprim from $13.50 to $750 for a single pill. The anti-parasitic med can treat infections in people with compromised immune systems, including those living with HIV. Shkreli’s actions led AIDS activists to protest outside Turing headquarters in 2015.

Shkreli’s fraud charges, however, date back to before the Turing price hike, when he was heading biopharmaceutical company Retrophin Inc. and hedge fund MSMB Capital Management.

When he was found guilty of fraud, Shkreli showed no remorse. Instead, he said via a YouTube video: “I’m one of the richest New Yorkers there is, and after today’s outcome, it’s going to stay that way.”

But his riches haven’t helped keep him out of jail. Reuters notes that he has been incarcerated since September. That’s because a judge revoked his bail after Shkreli posted on Facebook that he’d pay $5,000 for a strand of then-presidential candidate Hillary Clinton’s hair.