After three decades, GHESKIO continues its leading role in the global fight against HIV/AIDS.

Founded in 1982, GHESKIO — an acronym of the French translation of the Haitian Study Group on Kaposi Sarcoma and Opportunistic Infections — has been treating people living with HIV in Haiti for longer than almost any other AIDS service organization in the world.

GHESKIO is now the largest provider of HIV and tuberculosis services in the Caribbean, and has had a global impact on care not only in low-income countries, but in the United States as well.

Over the past 30 years, GHESKIO and its corresponding health centers have lowered HIV prevalence in Haiti from above 14 percent to just 1.7 percent today. It has also provided treatment and adolescent-specific services to over 25,000 children across the island country.

After Haiti’s 2010 earthquake, the group also partnered to care for 6,000 trauma patients and worked independently to relocate nearly 7,000 homeless earthquake victims –– a practical acknowledgement that so many of these health and social issues are connected.

GHESKIO’s work has also had a global impact. Its research and treatment models have influenced World Health Organization guidelines for initiating antiretroviral treatment in low-resource countries, and how to treat these individuals for cholera in the midst of an epidemic.

It helped lay foundational research for the transmission and treatment of HIV and its effects. And through award-winning design for open-air clinics, it has helped re-envision what a hospital can be in a developing country.

POZ recently spoke with GHESKIO founder Jean W. Pape, MD, to talk about the organization’s legacy and its plans to continue fighting some of the world’s most serious health crises. 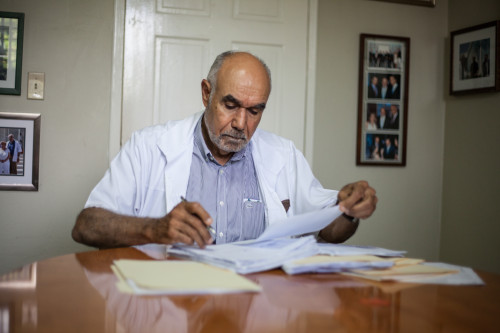 Jean W. Pape, MD, is the director of GHESKIOCourtesy of GHESKIO

We preceded AIDS, so to speak, because we were created in 1982 and at that time AIDS didn’t have a name. Nobody knew what to call the disease. It was a syndrome that presented differently in different patients.

We were created with a three-part mission: research, training and patient care. [In the beginning] our research was essentially to find out what caused the disease, whether the opportunistic infections that resulted could be treated, how the virus was transmitted, and later on, compiling the history of women and children before and after antiretroviral treatment became available.

The history of GHESKIO and that of AIDS is intertwined in so many ways. Today, we partner with the Ministry of Health in Haiti and the Weill Cornell Medical College in New York City, which is where I train medical professionals.

What is your role at GHESKIO?

My role has evolved over the years. Early on, I was the only physician seeing patients. Now, we are an organization of close to 500 persons. We have two main centers in Haiti, one south and one north of Port Au Prince.

My work now is as director of GHESKIO. I have an administrative part to oversee the objectives of the organization. I supervise research, training and patient care.

In the early days, I split my time between New York and Haiti like 50/50. However, as Cornell changed to a problem-based type of teaching, we don’t have big lectures anymore. So I spend most of my time now in Haiti.

You’ve been at GHESKIO since the beginning. What were you doing in Haiti back then?

My first duty was to determine the causes of infantile diarrhea. This is often the number one cause of death in children under five in most developing countries. By the time they saw a physician in Haiti, they were profoundly dehydrated and they died.

There was no internet at that time, so I went back to New York and spent a week in the Cornell library to find a better approach to IV fluid. I noted that they were experimenting with a solution for cholera patients in Bangladesh, so I took back with me the formula.

It had a miraculous effect. Children who were dying, within minutes, were back to life. The mortality rate went down from 44 percent to less than one percent that same year, the first year I was there.

I’m actually an internist with specialty in infectious diseases, not a pediatrician, so a colleague in Haiti asked me to see some adult patients who had severe diarrhea and were dying as well. Those turned out to be our first AIDS patients. That’s how I got involved with HIV.

To what do you attribute GHESKIO’s global impact?

The very first support we got was from the U.S. National Institutes of Health (NIH). We applied for a grant from NIH in 1982 and we obtained it in 1983. Since then we’ve had continuous competitive NIH grants. From 1993 to present, we’ve also had continuous grants from NIH’s Fogarty International Center. Those grants are essentially to train people in research.

I think what has helped us is the fact that we were inclusive. For example, Haiti’s Ministry of Health is a founding member of GHESKIO. We’ve worked over the years with them to use the results of the research that we have done to develop public health models.

As funders such as The Global Fund to Fight AIDS, Malaria and Tuberculosis, as well as the U.S. President’s Emergency Plan for AIDS Relief, were able to provide support, we scaled up our model nationwide. We increased to 30 centers and created Centers of Excellence at those sites.

Today, we work with 116 local institutions both public and private. So it has been a long but exciting journey.

Tell us how architecture is a part of the GHESKIO story.

After the 2010 earthquake, our hospital collapsed completely. We lost four patients. So we were looking for advice on how to build a new state of the art hospital. Architects from Boston called the Mass Design Group helped us.

We developed a hospital concept that looks more like a hotel than a hospital. We have bright colors, open room and, a large patio with plants and trees. It’s very open to the sun and air because the tuberculosis bacterium is very sensitive to light and wind.

When we created a cholera treatment center, it was designed to be exactly the same. In fact, it was voted among the 10 best designed buildings in 2016. The architects also invited Hatian artists to use their talent in that hospital.

What the AIDS epidemic has shown is that the world has a lot of humanity and solidarity. If we can look at the better half of people, not look at the dark side, we can do things that will be very important for the world.

GHESKIO is an example of how you can change the course of an epidemic, and how we can use all the experience gathered in the AIDS fight to fight tuberculosis, malaria and many of the other scourges that affect the world.