“Community Reclaiming the Global Response” is the theme of the HIV2020 conference in Mexico City. 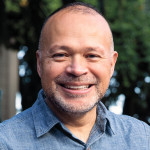 George Ayala is founding executive director of MPact Global Action for Gay Men’s Health and Rights, which is based in Oakland, California. MPact is one of the organizers of the HIV2020 conference to be held July 5 to 7 in Mexico City. HIV2020 was organized as an alternative to the 23rd International AIDS Conference (AIDS 2020), which will take place July 6 to 10 in San Francisco and Oakland. The International AIDS Society (IAS) is the sponsor of AIDS 2020.

In 2009, Ayala assumed his current role at MPact, which requires him to conduct policy analyses and advise policymakers on issues concerning HIV and men who have sex with men (MSM) and other marginalized communities around the world.

He has held HIV-related positions at the Hispanic AIDS Forum; the University of California, San Francisco; the Los Angeles County Department of Health Services; and AIDS Project of Los Angeles (now APLA Health).

How did the idea for HIV2020 originate?

Advocates had raised concerns when the IAS conference came to Washington, DC, in 2012. [IAS holds these conferences every other year.] At that time, the United States had discriminatory travel restrictions, which still remain, directed at people who are sex workers, use drugs or have histories of incarceration. Internationally, those communities represent significant portions of the people most affected by HIV.

Despite raising those concerns, AIDS 2012 came here anyway. I believe IAS decided to come partly because the Obama administration lifted what was then a travel restriction on all people living with HIV, which was an important policy win.

When advocates from groups such as MPact, NSWP, INPUD and GNP+ learned in 2017 that the United States was shortlisted to host AIDS 2018, we organized. That effort was successful. We got Amsterdam to host AIDS 2018.

In 2018, we knew that the United States was shortlisted for AIDS 2020. We organized again. This time we added our concern about the deteriorating human rights conditions here in the United States, mainly for migrants but also for people of color and queer people. Regardless, IAS went ahead with their decision to come to the Bay Area.

As a result, MPact joined forces with the other networks to create an alternative event that we called HIV2020.

Why choose Mexico City for HIV2020?

There is symbolic significance to our gathering in Mexico. Activists there are facing challenges of their own. We wanted to have thoughtful conversations with them. We consulted with them about whether it made sense for us to come to Mexico. They are actually really jazzed about HIV2020.

The Mexican activists wanted to connect their own experiences with those of activists around the world, who are also struggling to keep a window open for participation for civil society organizations involved in the HIV response.

We wanted to go to the Global South. We also wanted to be in a city where we wouldn’t have so many time zones to contend with in case we had the opportunity to connect with what’s happening at AIDS 2020. Further, we wanted to gather in a country where we could manage travel of criminalized and stigmatized groups from around the world.

For all these reasons, Mexico City made a lot of sense.

We want to create a safe space where people who are interested in thinking about their role in the global HIV response can have an equal place at the table. We believe we can model a different way of convening people.

We imagine a convening around developments in the HIV field, but we also believe that community members should be equal partners around the table when we are deliberating lessons learned, new science, etc.

The IAS conferences privilege people such as scientists, researchers, clinicians and government officials. Often, advocates show up to these conferences but are sidelined. We are literally segregated from the rest of the conference.

A community space does exist at IAS conferences called the Global Village—where great things happen—but there is a real feeling that communities are excluded from the main scientific discussions. We need to change that.

Apart from all of that, we will use HIV2020 to amplify the voices of those who are working across social justice movements. In particular, we will draw attention to the struggles of activists in Mexico and Latin America.

Day one will give groups and networks a chance to gather their own people to have in-house conversations that might not otherwise happen in other places. That is affinity. It’s about being with other activists, sex workers, trans people, queer people and migrants. We are having those conversations to start.

The second day is about intersectionality. We will issue a call for expressions of interest from community-based organizations, universities, governments and whoever is interested in throwing in proposals. We are inviting people to lead half-day and full-day programs around issues aligned with the priorities, themes and goals of HIV2020.

On day three, we want to bring it all together, connecting the dots for people. We want to give folks an opportunity to comment on the work that happened in the previous two days and to create an action plan or talking points around the importance of communities and their role in the global HIV response.

In particular, we will end the three days with a set of recommendations about how we continue to center community. We’ll also create a set of specific recommendations to send back to IAS. We are hoping our event will influence the way IAS conducts itself in the future.

We are going to fundraise. We will keep our overhead costs as low as possible. We are working with Mexico City government officials to identify free space.

That will allow us to direct any funds we raise toward supporting scholarships. We will raise as much money as we can to get as many activists as possible to Mexico City.

We will do that in a number of ways—through grant writing and campaigning big AIDS service organizations in different parts of the world that might be willing to support activists within their respective countries or regions.

The cost of doing a conference like this in a place like Mexico City is less than doing so in the Bay Area. We will be saving some money that way.

How can people support HIV2020?

We know that folks will probably feel conflicted about which conference to attend. Go where you believe you can have impact and where you think your voice can be heard. Attend either or both if you have the means. We recognize that a lot of folks in our community will be in the Bay Area participating, and we want to support them too.

Hopefully, we will figure out ways to connect with what’s happening in the United States from Mexico City. I feel confident that our conversations with IAS moving forward will be positive in that regard. They are realizing that HIV2020 represents an opportunity to expand space for people to be involved.

Spread the word about HIV2020. Raise awareness about why we are doing what we are doing; issue statements of solidarity; and help us leverage resources to support the participation of community activists. If people are interested in working with us on logistics, programming or communication, contact us or sign up at HIV2020.org.