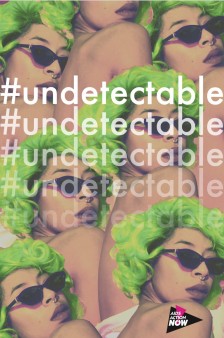 A gallery of this year’s AIDS posters and a chat with their creators.

Looking at public health campaigns about HIV, Alex McClelland felt that people living with the virus were often presented as a threat to the public. Hoping to change that messaging, McClelland and Jessica Whitbread founded PosterVirus, a Canadian-based project for which artists create posters about HIV, hepatitis C and related topics.

“In the history of AIDS activism, art has always been central to a lot of the work. We are trying to bring that back,” says McClelland, a 38-year-old PhD candidate in criminology who has been living with HIV since he was 19.

He and Whitbread, who are both Canadian, launched PosterVirus in 2011 (the project often includes artists from the United States). After a two-year hiatus, the project returns this year with a new lineup to provoke conversations.

Once completed, the posters are printed and displayed throughout Toronto a week before a Day Without Art, an annual event held on December 1 in conjunction with World AIDS Day that calls for action and mourning in response to the AIDS crisis. The posters can also be seen on the project’s official website, PosterVirus.tumblr.com.

So far, PosterVirus has worked with over 30 artists and produced around 25,000 posters. McClelland notes that artists are given complete freedom to create whatever they want for the project and that many collaborate on their work.

Nowadays, Whitbread adds, she finds inspiration in the artists she’s working with through PosterVirus.

Labeija, a New York artist, created a poster focusing on her newfound freedom as an HIV-positive woman who is now undetectable.

Reproducing a text message chat for her poster, Toronto-based artist Karuhanga explores what it’s like to have a Ugandan aunt whom she has never met die of an AIDS-related illness.

The poster from Canadian collective FASTWÜRMS is about loving people living with HIV in a world full of stigma and discrimination.

Kelley, a Canadian artist and activist living with HIV, said his work is “intended to critique the culture of memorial, and the endless imperative to present publicly as healthy, happy and compliant.”

Kelley hopes his poster will dignify anger as a unifying force, initiate an uncomfortable conversation and serve as an inspiration not to give up the fight for positive change.

Finally, Fernandes’s poster is about Truvada as pre-exposure prophylaxis (PrEP), the daily pill to prevent an HIV-negative person from contracting the virus.

“In my poster, I think about it in a political, social space,” Fernandes, a New York–based artist who sometimes works in Toronto, said. “I say, ‘In PrEP We Trust?’ So almost like a slogan you would find in an election campaign. Where does this trust come from?”

Noting that PrEP is a “somewhat privileged drug,” because everyone doesn’t have equal access to it, Fernandes said his work also focuses on how the advent of PrEP has given some people living with HIV a full allowance and accountability to engage in sexual activities.

“I want to create a dialogue,” Fernandes said. “I want people to think about the responsibility. The understanding. The privilege. The future of what this drug does for us.”

“Art is a powerful form of activism,” Whitbread said. “It engages people at different levels and lets them react in their own time. There is an element of play in art, and it is a way to have difficult conversations.”

Kia Lebeija's poster addresses her power in being an HIV-positive woman who has been rendered no longer infectious through the use of HIV treatment, a new identity that is changing our lives as people living with HIV.PosterVirus/Kia Lebeija

Kia Lebeija's poster addresses her power in being an HIV-positive woman who has been rendered no longer infectious through the use of HIV treatment, a new identity that is changing our lives as people living with HIV. PosterVirus/Kia Lebeija
Jessica Karuhanga's poster looks to her family’s Ugandan heritage and the poetics of space, distance and memory, where she presents a text message dialogue between herself and her father about her aunt who died of AIDS. PosterVirus/Jessica Karuhanga
FASTWÜRMS poster is a message of universal love and acceptance intervening in a seemingly unending culture of stigma and discrimination. PosterVirus/Fastwürms
Shan Kelley's poster looks at apathy through the culture of memorial, and the endless imperative to present publicly as healthy, happy and compliant. PosterVirus/Shan Kelley
Brendan Fernandes's poster challenges the new biomedical mediated HIV-negative self, with the unquestioning heralding of PrEP as a panacea in the response. PosterVirus/Brenden Fernandes