The Power of U=U

Support grows stronger for a statement on transmission risk when undetectable.

If your HIV is undetectable, then it’s untransmittable. That’s the simple but transformative idea behind the “U=U” campaign. “The message is radically at odds with the status quo,” says Bruce Richman, the executive director and founder of Prevention Access Campaign (PAC), which promotes U=U. But, he adds, “As more influential experts and institutions support the message, more people will come to accept that it is true.”

That acceptance is growing fast and far. The U=U campaign is based on a PAC consensus statement that over 350 organizations from 45 countries (representing 13 languages) have endorsed thus far. Many groups, including the Joint United Nations Programme on HIV/AIDS (UNAIDS), signed on at the recent International AIDS Society Conference on HIV Science in Paris. “We’re seeing less disagreement with the science,” Richman says, “and more concerns about whether people with HIV and their sexual partners will understand what undetectable means and how to stay undetectable.”

The PAC statement reads in part: “People living with HIV on ART [antiretroviral therapy] with an undetectable viral load in their blood have a negligible risk of sexual transmission of HIV.” The statement defines negligible as “so small or unimportant as to be not worth considering; insignificant” and explains that it may take up to six months for a person to become undetectable and that daily adherence is essential. (And, yes, it notes that HIV meds don’t protect against other sexually transmitted infections or pregnancy.)

A recent ad campaign in Washington, DC, appears on buses and reads: “Taking HIV medication daily suppresses the virus and means you can’t pass it to others.” The U=U message is being distributed globally in ways that are culturally relevant, Richman says, but one aspect seems universal: “People all over the world who have felt the stigma and the burden of infectiousness are seeing themselves in a new light.” 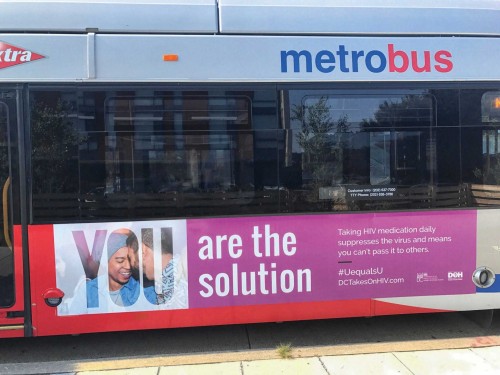 A bus ad in Washington, DCCourtesy of DC DOH