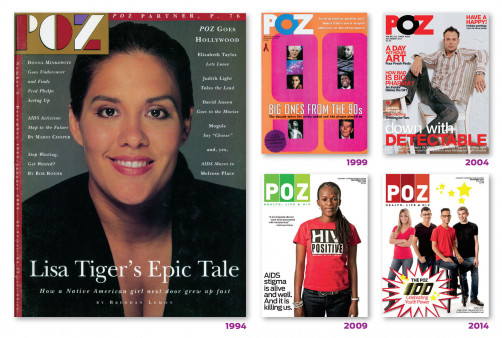 A look at December issues from the POZ archives

COVER: From riots to ribbons, a collection of 99 monumental moments of the AIDS epidemic during the ’90s. INSIDE: A guide to the new world of adherence high anxiety; catching up with former cover subject Mary Fisher; will a structured treatment interruption make your holiday season jolly, or is it a folly? PLUS: Meet Ferd Eggan, the radical AIDS czar of Los Angeles.

COVER: Aiming to escape side effects and preserve future options, more people with HIV are daring to live with a detectable viral load. INSIDE: To commemorate Day With(out) Art, four HIV-positive artists share work about life and love with HIV; a new exposé on the greed and corruption of big pharma. PLUS: What it’s like to climb Mt. Kilimanjaro while living with HIV.

COVER: Nokhwezi Hoboyi, an activist from the Treatment Action Campaign in South Africa who is HIV positive, bears witness to the stigma of AIDS. INSIDE: Seth Berkley of the International AIDS Vaccine Initiative talks about vaccine research; comic book creator Darren Davis is doing super, despite HIV. PLUS: Portraits from Infected & Affected by photographer Joan Lobis Brown.

COVER: The POZ 100 celebrates youth power by highlighting 100 individuals who are younger than 30 and fighting against HIV/AIDS. INSIDE: Texas fundraisers help people with AIDS get home for the holidays; youth with HIV record their own stories for the Voices project at St. Jude’s. PLUS: Olympic diver Greg Louganis reflects on making a documentary about his life.

Click here to view the past issues exactly as they appeared in print.