In this episode of POZ at Home, Oriol R. Gutierrez Jr. has a conversation with Sherri Lewis, Derrick Mapp and Jeff Taylor about the challenges of growing older while living with HIV. (Press play button in main image above to watch video.) 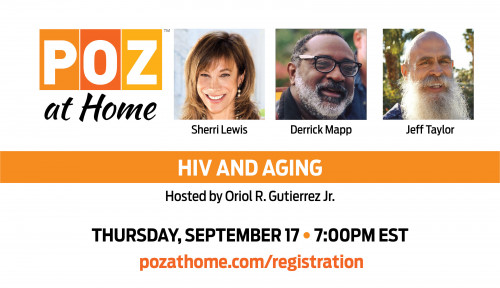 Sherri Lewis spent her twenties in New York City as a singer and entertainer. She was diagnosed with HIV in 1987 after going for a routine blood test for a marriage license. For the past thirty years, Sherri has been an activist and has shared her story in publications including POZ, A&U Magazine and the Washington Post. She’s currently a blogger for TheBody.com. Sherri was the host of Straight Girl in a Queer World, a series of podcasts for the Here! Networks. She is currently living in Los Angeles with her dog Romeo, recording music and writing her memoir.

Click here to read our May 2008 cover story on Sherri.

Derrick Mapp currently works as a senior services care navigator and health counselor at the Shanti Project in San Francisco. He is dedicated to working and volunteering for advocacy efforts for HIV and cancer as well as the GLBTIA+ community. He is involved with several HIV-related research networks and advocacy groups such as the HIV Vaccine Trials Network, the AIDS Clinical Trials Group, the National Cancer Institute’s AIDS Malignancy Consortium and he serves as a community representative for the AIDS Treatment Activists Coalition where he advocates for community interests and concerns in the development of drug trials. Locally, Derrick is a member of the San Francisco HIV Community Planning Council.

Jeff Taylor is a long-term survivor who has been active in HIV research advocacy since enrolling in the first AZT trials in the late ’80s. He is currently the executive director of the HIV+ Aging Research Project-Palm Springs, which conducts patient-centered, community-based research on aging and HIV in California’s Coachella Valley. Jeff has served on the community scientific subcommittee of the AIDS Clinical Trials Group and as a community representative to the National Cancer Institute’s AIDS Malignancy Consortium, where he was a part of the HPV Working Group and the ANCHOR Study. He previously served on the Department of Health and Human Services Antiretroviral Guidelines Panel. Jeff currently sits on community advisory boards for the Collaboratory of AIDS Researchers for Eradication (CARE), UCSF’s amfAR Institute for HIV Cure Research and UCSF’s The Delaney AIDS Research Enterprise to Cure HIV (DARE).  He’s also on the AIDS Treatment Activists Coalition’s Drug Development Committee, which meets regularly with pharmaceutical and Food and Drug Administration on HIV drug development issues.

Click here to read our September 2019 cover story on Jeff.