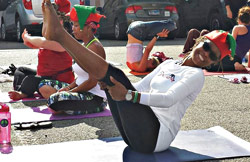 Venita Ray is a woman who can move mountains—or at the very least, climb them. She was a teenage mother, a high school dropout and a drug addict. But she overcame all those challenges. While working full time, she completed her law degree at age 37 and became an attorney.

Then in 2003 she tested positive. “I was consumed with shame, guilt, remorse and self-pity,” she recalls. “I was tired of fighting. HIV was the final blow.” She quit her job, sold her home and moved to Texas to be near family so she could die. “I lived in darkness for four years,” Ray says. That changed when she discovered yoga and an interest in nutrition: “It was on a yoga mat that I was able to reconnect to a God of my understanding.”

In 2011, Ray participated in the “We Choose to Climb” project, in which a group of women traveled to Africa and climbed Mt. Kilimanjaro to send a message to the world: Do not give up when you face “mountains” in your life. The experience helped her become public about HIV. “I felt naked at first,” she says, “but then a sense of relief and freedom. Now I talk about HIV all the time!”

She and her sister appeared in the CDC campaign “Let’s Stop HIV Together.” Today, Ray is a full-time activist, training HIV-positive people in Houston how to be advocates through Legacy Community Health Services. She’s also fighting HIV criminalization laws and collaborating on a “Texas solution”—finding ways to get health care to uninsured folks despite the fact that Texas, like most states in the South, did not expand Medicaid. It’s one mountain of a challenge—but that won’t deter Venita Ray.