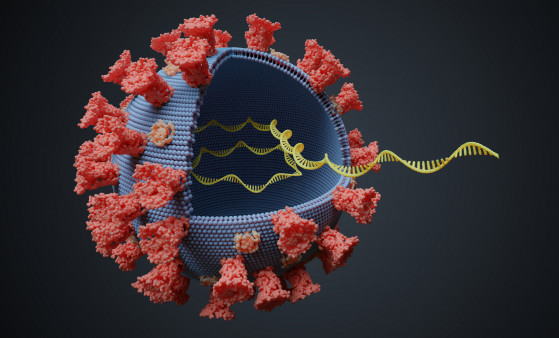 Previous studies of the association between tenofovir and the coronavirus have yielded mixed results.

Once again, a study has found no association between the use of tenofovir and the likelihood of contracting SARS-CoV-2, the coronavirus that causes COVID-19, according to a presentation last week at the International AIDS Society Conference on HIV Science (IAS 2021).

The association between COVID-19 and tenofovir, an antiviral drug widely used for HIV and hepatitis B treatment as well as HIV pre-exposure prophylaxis (PrEP), has spurred speculation since the early days of pandemic.

Early on, small studies and anecdotal reports suggested that people living with HIV were no more likely to acquire SARS-CoV-2 or to develop severe illness, despite having a higher likelihood of immune suppression. (Later studies, however, suggest that they are at modestly increased risk for severe disease.) This led some people to wonder whether antiretroviral drugs used for HIV treatment or prevention might be protective against the new coronavirus.

The active form of tenofovir, a nucleotide analog that stops viruses from copying their genetic material as they replicate, has shown activity against SARS-CoV-2 in laboratory studies and in ferrets. But that doesn’t necessarily mean it can prevent SARS-CoV-2 infection or treat COVID-19 in the real world.

Last year, Spanish researchers reported that among 77,590 people with HIV on antiretroviral treatment, those taking tenofovir disoproxil fumarate (TDF) and emtricitabine (the drugs in Truvada) were about half as likely to be diagnosed or hospitalized with COVID-19 as people taking other antiretrovirals. No one using TDF/emtricitabine was admitted to the intensive care unit or died. A similar association was not seen for the closely related tenofovir alafenamide and emtricitabine (the drugs in Descovy).

Another Spanish study showed that people using Truvada or Descovy for PrEP were significantly more likely to test positive for SARS-CoV-2 antibodies compared with non-users (15% versus 9%)—perhaps because they were having more sex. (Although the coronavirus is not known to be directly sexually transmitted, it can spread through the air during sex and probably can be transmitted via kissing.) Truvada users were less likely to develop symptomatic COVID-19 and had a shorter duration of symptoms, but these differences did not reach statistical significance. And four of the five people hospitalized with COVID-19 were taking PrEP.

Most recently, yet another Spanish study presented last month at the EASL International Liver Congress showed that people taking TDF for hepatitis B appear to have a lower risk for severe COVID-19 than those taking another antiviral, Baraclude (entecavir).

But studies of the link between tenofovir, SARS-CoV-2 infection and COVID-19 severity in other countries have not seen a significant association. Now, a French PrEP study adds to the evidence that tenofovir does not offer protection against the coronavirus.

Constance Delaugerre, MD, PhD, of the University of Paris, and colleagues compared SARS-CoV-2 seroprevalence, or the presence of antibodies indicating prior infection, among gay and bisexual men who used Truvada in the French Prévenir PrEP trial and a matched cohort of men from the Paris region who did not take the combination pill.

As previously reported, Prévenir is an open-label study in which HIV-negative men who have sex with men could choose to use either once-daily Truvada or on-demand PrEP (also known as PrEP 2-1-1) taken before and after sex.

The researchers compared the presence of IgG antibodies against the SARS-CoV-2 spike protein in 844 Prévenir participants and 844 men in the Sapris-Sero study (a survey of SARS-CoV-2 antibody prevalence in the French general population) between May and October 2020. They were matched on the basis of age, socioeconomic/occupational category and date of sampling. A total of 730 Prévenir participants could be matched for all three factors, of whom half were using daily PrEP and half were using on-demand PrEP.

In the study population as a whole, most men in both groups tested negative for SARS-CoV-2 antibodies: 89.2% in Prévenir and 87.4% in the Sapris-Sero cohort; 0.5% and 3.3%, respectively, tested “low-positive” or had indeterminate results. That left 10.3% of the Prévenir participants and 9.2% of the Sapris-Sero participants who tested positive for SARS-CoV-2 antibodies. Men taking daily PrEP and on-demand PrEP had similar seroprevalence rates (9.2% and 11.5%, respectively). When low-positive or indeterminate results were considered to be negative, the seroprevalence rates in the Prévenir and Sapris-Sero groups were statistically equivalent (odds ratio 1.1).

“[The] proportion of participants with a positive SARS-CoV-2 serology was similar in PrEP users (daily or on demand) and in a matched cohort,” the researchers concluded. “Our results suggested that TDF/[emtricitabine] has no role in reducing SARS-CoV-2 acquisition.”