We’re seeing so much action on the HIV prevention front, we want to pause for a quick roundup. But first, a few definitions: Undetectable Equals Untransmittable, U=U, refers to the fact that people living with HIV who take meds and maintain an undetectable viral load cannot transmit the virus sexually (it’s the same concept as Treatment as Prevention, or TasP). PrEP, meanwhile, refers to pre-exposure prophylaxis, which is taken by people at risk of contracting HIV. Currently, the only form of PrEP approved by the Food and Drug Administration is the daily tablet Truvada, which consists of two HIV meds: tenofovir disoproxil fumarate and emtricitabine.

The federal Centers for Disease Control and Prevention (CDC) updated its data about HIV prevention methods. The result? “For persons [living with HIV] who achieve and maintain viral suppression, there is effectively no risk of transmitting HIV to their HIV-negative sexual partner. This translates to an effectiveness estimate of 100%.” That number is lower, the CDC notes, if people with HIV don’t take meds as prescribed or if viral suppression is not maintained.

This is great news, explains Murray Penner, the executive director of North America at Prevention Access Campaign (PAC), which launched the U=U initiative. “People around the world look to the CDC for accurate assessments about HIV transmission risk,” Penner tells POZ. “It’s important that the CDC’s messaging be clear, easy to understand and accurate. You can’t get better than 100% effective.” He does note a possible improvement. “We’d like to see the word effectively dropped from the messaging. We’ve been hearing that some folks don’t know that effectively means ‘actually’ or ‘in effect’ and aren’t aware that the CDC agrees with U=U.” 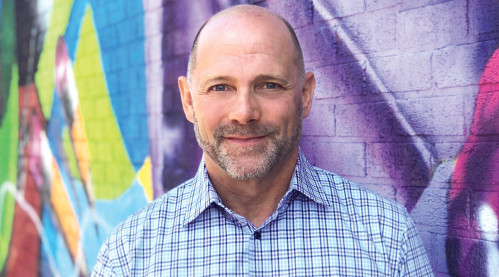 How Well Does PrEP Work?

In the same update, the CDC says that daily or consistent PrEP use (at least four times a week) reduces the risk of acquiring the virus by 99% in men who have sex with men (MSM). Regarding heterosexual men and women, there is no prevention estimate for daily or consistent use* though “it is likely to be similar to what has been observed for MSM.” For people who inject drugs, the range is between 74% and 84%. “The effectiveness of oral daily PrEP,” the CDC cautions, “is highly dependent on PrEP adherence.”

The South is ground zero for today’s HIV epidemic. A recent public opinion survey among voters in seven Southern states spearheaded by the North Carolina AIDS Action Network (NCAAN) found that only between 12% and 18% of respondents believe that U=U is true. When asked whether they’d heard of PrEP, 54% in Georgia said they had not; once it was explained to them, 64% said they supported programs to provide PrEP to low-income people. Overall, the respondents were in favor of expanding Medicaid, teaching comprehensive sex education and requiring insurance to cover PrEP. “The results about knowledge of U=U are alarming,” said NCAAN executive director Lee Storrow, “and should serve as a challenge to hasten our public education efforts on viral suppression.” On the plus side, the poll shows that Southerners do want policies that address their health care and HIV prevention needs.

PAC launched the U=U initiative in July 2016. Since then, 886 groups spanning nearly 100 countries have joined the movement. To continue getting the word out, PAC issued a call to action to HIV leaders, asking them to increase the reach and availability of public health information on U=U, to integrate U=U in their grant-making priorities, to leverage U=U as a public health argument in advocacy for universal access to treatment and services, and to hold government leaders accountable for ensuring that U=U is clearly communicated and included in national HIV programs, such as Trump’s Ending the HIV Epidemic: A Plan for America.

Do awareness campaigns work? Chicago’s PrEP4Love sure does! Launched in 2016, it includes social media as well as ads on buses and trains. A recent study found that the ads garnered nearly 41 million unique views across social media and 25,000 click-throughs. The most popular page on the campaign’s website was the one listing health care providers who prescribed PrEP (indicating a high interest). What’s more, many callers to the PrEPLine phone number were people of color, specifically, gay men and transgender women—exactly the demographic the campaign wanted to reach. Let’s hope Milwaukee and Houston enjoy such success. This summer, Milwaukee launched the “Stay PrEP’d Up” campaign, aiming to destigmatize prevention among people of color. And the Houston Health Department launched its “I am Life” campaign for the city’s LGBT community. It showcases the stories of 20 Black and Latino people who advocate for PrEP to remain HIV negative or treatment to stay undetectable and untransmittable. 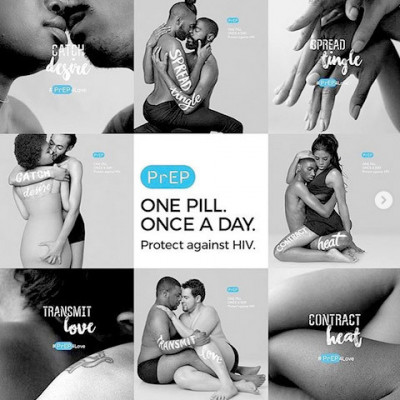 U=U support at a 2017 AIDS conference in ParisInstagram/StayPrepdUp 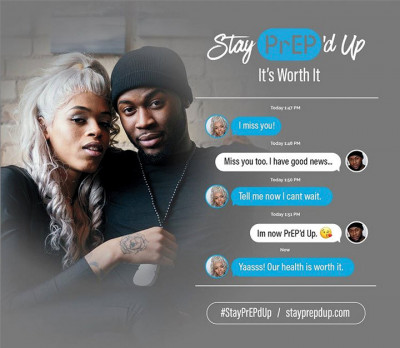 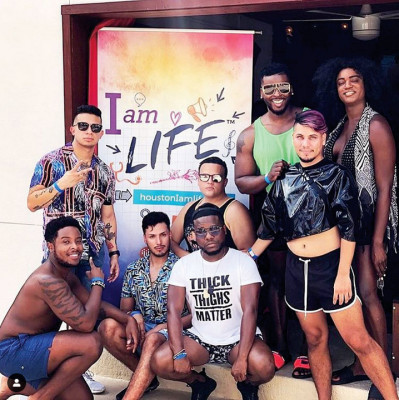 PrEP on the Campaign Trail

Democratic presidential hopeful Senator Kamala Harris (D–Calif.) unveiled a plan to make PrEP free, including no co-pays or charges for tests. AIDS activist Peter Staley tweeted a “huge thanks” but noted that she “missed the bull’s-eye” by expecting the government to pay the Truvada tab to Gilead Sciences. The pharma giant charges about $2,000 per month for the med in the states while it’s $8 in Australia, Staley pointed out, adding that reports show that the CDC owns the patent on Truvada as PrEP. 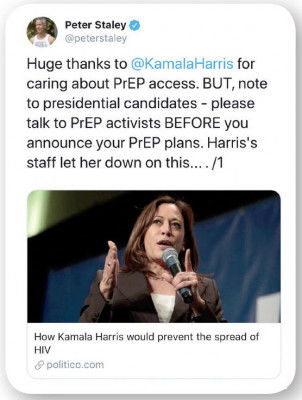 PrEP Without a Prescription?

If the proposed SB-159 bill becomes law, Californians will be able to stop by a pharmacy and pick up their first 30 days of PrEP without a doctor’s prescription—as long as pharmacists first provide an HIV test and counseling, order lab tests to screen for kidney function and refer the patient to a primary care doctor to extend the PrEP prescription. State Senator Scott Wiener (D–San Francisco) proposed the bill because “there are still too many barriers,” such as long waits, paperwork and stigma. 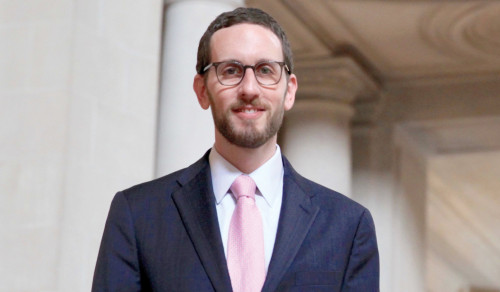 The World Health Organization backs the on-demand, or 2-1-1, PrEP dosing protocol for MSM. This involves taking a double dose of Truvada two to 24 hours before expected sex. Then, if sex occurs, a single dose 24 hours later and then the last single dose 24 hours after that. This PrEP protocol has not been approved in the United States. 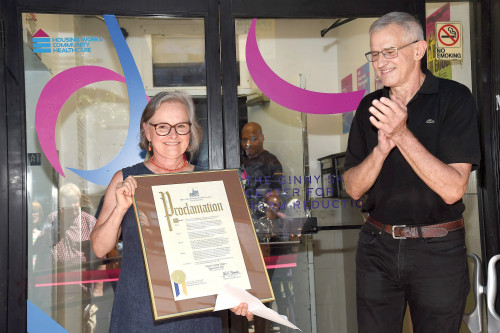 Finally, a reminder that there’s more to HIV prevention than PrEP and U=U. In July, Housing Works, which fights HIV and homelessness, opened the Ginny Shubert Center for Harm Reduction. The Manhattan clinic offers syringe exchange, a crystal meth support program, opioid overdose prevention training, counseling and, yes, PrEP, as well as comprehensive primary care for those living with and at risk for HIV.

*The article was updated to correctly identify the CDC’s estimates for PrEP use among heterosexual men and women. We previously noted the effectiveness was between 88% and 90%, but that describes the effectiveness when any amount of TFV was found in the blood, meaning only that PrEP was taken recently but not daily or consistently. As the CDC notes, the effectiveness is likely to be greater when adherence is greater.