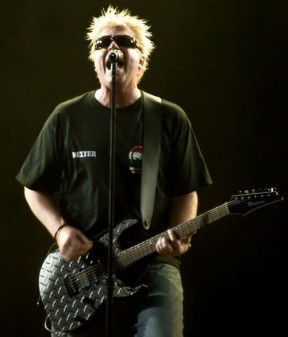 Dexter Holland from The Offspring at Sziget Festival in Budapest, Hungary, in 2009. opethpainter/CC BY 2.0

The Offspring’s singer-guitarist had put his molecular biology studies on hold for nearly 20 years.

In 1994, punk band The Offspring released its third album, Smash, which became the best-selling indie record ever. Despite a grueling schedule of touring and recording since then, the group’s singer-guitarist Bryan “Dexter” Holland has been chipping away at a PhD. Rolling Stone reports that he earned the degree this month—and published a dissertation on the molecular dynamics of HIV.

The 175-page thesis is titled Discovery of Mature MicroRNA Sequences Within the Protein-Coding Regions of Global HIV-1 Genomes: Predictions of Novel Mechanisms for Viral Infection and Pathogenicity. You can read a PDF of it, which he linked to in a tweet he sent out earlier this :

“My research focused on the human immunodeficiency virus, or HIV, the virus which causes AIDS,” Holland said in a statement quoted in Rolling Stone. “I am interested in virology and wanted to contribute in some small way to the knowledge which has been learned about HIV and AIDS. This terrible disease remains a worldwide epidemic—over 35 million people worldwide are currently infected and living with the HIV virus. Over 1 million people a year die from this disease.”

Though he cautioned that his work wouldn’t directly lead to a cure, he remained optimistic about the future: “I believe that by adding to the vast amount of information that we’ve learned about HIV in the last 30 years or so, we’ll get there. Toward that end, I’m going to continue to do research, and you’ll probably see some of my research papers get published here and there over the next few years.”

He told Rolling Stone about putting his studies on hold to tour with the band when The Offspring’s seminal 1994 album came out: “I was pursuing a PhD in molecular biology. And then I put it on hold. My mom wasn’t too happy about that! My professor thought I was making a terrible mistake. But it wasn’t just like I was saying, ‘Fuck it.’ We could tell this was going to be something. And we had to see it through.”

Holland graduated from the University of Southern California this month. But instead of heading off to the lab or academia, he is returning to the stage with The Offspring for a world tour.