Pushing Myself To Reach The Top

In this essay, a journalist living with HIV reflects on his personal journey of reaching Africa’s highest point.

A year ago, while browsing through travel brochures and scouring the Internet for new adventures, I came across Mount Kilimanjaro. I had heard of it, I knew it was somewhere in Africa, and I was aware that people recreationally hiked to the peak.

Not being much of an outdoorsman, let alone a hiker, I immediately considered taking on the challenge, just to prove to myself that I can, if I try hard, accomplish anything. But after looking more into the routes, length of time and altitude of Uhuru Peak, the highest point in Africa, I quickly talked myself out of my outrageous idea.

As a travel writer, I’ve been privileged to visit many parts of the world and I’ve pushed myself out of my comfort zone many times while traveling because I didn’t want to miss out on once-in-a-lifetime opportunities. But even though I may have been to some extreme destinations, I was always comforted by the fact that I had a hotel or ship to return to.

If I spent a day hiking (which I would consider to be torturous), I could always end the day with a hot shower and a comfortable bed. The extent of my camping experience as an adult was limited to luxury lodges in the woods, mountains or deserts.

So when I read about the hike to the top of Kilimanjaro taking five days, which included sleeping in huts and having limited access to flushing toilets, I wasn’t at all convinced, but then that little voice inside my head told me that I needed to do this.

Why? I honestly had no idea at the time, and didn’t fully know until I was about half way up on summit day, but when I heard that little voice, I booked my trip, giving myself a year to mentally prepare for an experience that would later change me. 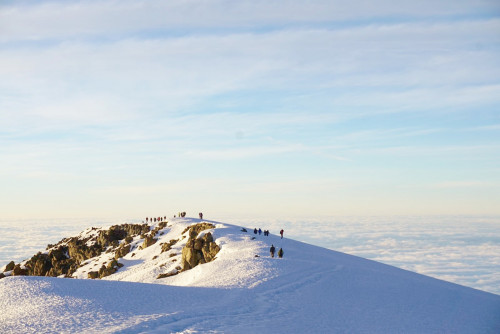 Being HIV positive for almost a decade, I’ve learned that my HIV status is nothing more than a small part of what makes me who I am. When I first was diagnosed, I immediately began limiting myself, convincing myself that I no longer could do certain things, like travel far or exhort myself in any way.

And although I did restrict my life at the time, I slowly came to the realization that I was 100 percent wrong in ever doing so. It’s taken close to 10 years of continually pushing myself to keep confirming to myself that my status can’t stop me.

I think there was a part of me that just wanted to do something big, something that I could really be proud of. Something that would definitely challenge the stigma surrounding people living with HIV. And when the time came to actually do the climb, I didn’t hesitate in casually bringing up my HIV status with the nine strangers who were hiking to the top with me. In doing so, I cemented the challenge out loud, and I was then more determined than ever to reach the top.

The days leading up to summit night were definitely not easy. Each day we would ascend to higher altitudes, which would take my breathe away, both visually as the surroundings only got more incredible as we went up, but also literally as the air would continue to thin out with each step I took. Camping was fairly easy, as my body, along with everyone else’s body, would collapse into our sleeping bags, begging for rest.

When we reached summit night, the way up was thankfully in the darkness because I didn’t have time to stress out over the steep grade of the climb, or notice how simple it would have been to fall off the side of the mountain. It wasn’t easy; nothing about this entire trip was easy.

I was a solo traveler, climbing a mountain with strangers turned friends whom I had just met. But it wasn’t until about half way up that this entire experience began to make more sense to me. I had spent years doubting myself, and it all really began after I seroconverted. Even though almost a decade had passed, and I had told myself that I was OK, there was still a part of me that was living with a bit of self-hatred and self-doubt. 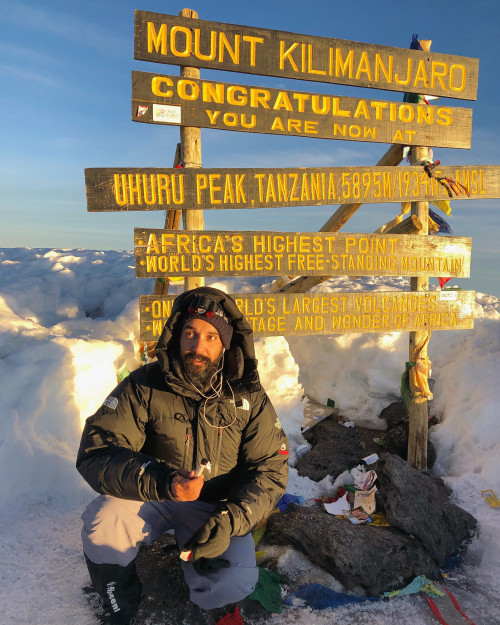 It wasn’t until I was on the side of Africa’s tallest mountain before it dawned on me that I was doing all of this not to prove to the world that I could do it, but to once and for all put an end to that inner negativity inside myself and prove myself wrong. Whatever caused me at that moment to come to a life changing realization I’m still unaware of, but afterward I was ready to reach the top and all my doubts were gone. I was focused on reaching the top in time for sunrise.

The saint-like porters and guides that accompanied us on summit night were our lifelines. They watched every movement we made and at any sign of hesitation, they were there to reassure us and/or carry our packs for us. These guys, along with my fellow hikers, are the reason I made it to the top, plain and simple.

The sunrise that ensued the moment we reached the summit on July 4 was nothing short of magical. Not being able to tell the difference between the snow on the ground and the clouds surrounding the peak was something I will dream of for the rest of my life.

The sense of accomplishment I felt was enough to start my waterworks. I cried because it was beautiful, and also because I had pushed myself harder than I had ever done so in my entire life, and I had succeeded. No more doubts, no more fears, no more telling myself that I can’t, because I can, and I did.

The Best Way to Travel While There: My entire 17-day experience throughout Kenya and Tanzania was experienced through Intrepid. Intrepid Travel sends more than 100,000 travelers across the globe with their more than 1,000 itineraries. The Best of Tanzania itinerary offers adventure seekers the opportunity to experience Tanzania’s most famous natural wonders like the vast Serengeti plains, Ngorongoro Crater, Mount Kilimanjaro and the shore of the Zanzibar coast.

David Duran is a travel writer. He has visited all seven continents and more than 70 countries. Click here for more information.