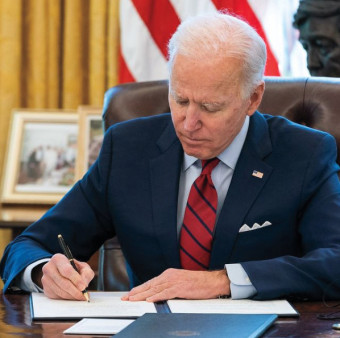 Within a few hours of his January 20 inauguration, President Joe Biden signed 17 executive orders. One explicitly protects LGBTQ people from discrimination. The order had been deemed necessary because after the Supreme Court ruled last year that employers could not discriminate against LGBTQ workers, the Trump administration stated that the ruling did not apply to other areas, notably health care. Biden’s executive order clarified that, indeed, federal antidiscrimination regulations cover health care, education, housing and taxpayer-funded programs. Also in January, Biden rescinded the ban on openly transgender people serving in the military, a discriminatory policy enacted under President Donald Trump.

Protections are needed. Even though same-sex marriage equality is the law of the land, 27 states don’t explicitly protect LGBTQ people from other types of discrimination. What’s more, a future president could undo Biden’s equality efforts, and countless bills across the nation target queer people (such as legislation banning transgender high school students from playing sports).

What does this have to do with HIV? First, LGBTQ people experience higher HIV rates than their heterosexual peers. In 2018, 69% of new HIV diagnoses in the United States were among gay and bisexual men (about 26,000 out of 37,968 total cases). And in 2017, the number of transgender people who tested HIV positive was three times the national average, and it’s estimated that 14% of trans women are living with HIV.

Obviously, allowing discriminatory policies in health care settings will affect queer HIV-positive people’s access to care and treatment—not to mention their well-being. Plus, people living with HIV who don’t maintain an undetectable viral load can transmit the virus to others. Discrimination harms LGBTQ people—how can you prioritize your health if you’re denied housing, for example?—while supportive environments foster better health outcomes. A case in point: A recent study showed that transgender people with HIV who received gender-affirming surgery were more likely to suppress the virus (click here for details).

To ensure LGBTQ protections nationwide, the House of Representatives passed the Equality Act, a federal antidiscrimination bill. The Senate has yet to vote on it, but Democrats support the measure, and Biden has said he’ll sign it into law when it lands on his desk. Stay tuned.